On March 24, the crypto market was stirred by the news that Tesla began to accept bitcoin as a means of payment for its products and services. Thanks to the launch of this service, the crypto market has steamed up. The BTC/USD pair has finally broken above the psychological level of $ 55,000. There was every reason to believe that the main digital assets could continue to rise. However, this did not happen for several important reasons.

The first reason is a fundamental one. Stock market players are very skeptical about making large investments due to the worsening epidemiological situation across the world. The market uncertainty affected the BTC/USD pair, which needed to attract new large investors to grow further. In recent days, the pair showed signs of consolidation. Yet, big companies were reluctant to follow the example of Tesla.

The second reason is the lack of interest from institutional investors at a critical moment. Elon Musk’s statement cheered up the market and the BTC/USD pair reached the level of $57,500 Bitcoin’s rally to the important milestone of $55,000 was fostered by the announcement of Tesla, which triggered a hype that attracted retail traders. They were ready to open long margin positions on crypto exchanges. In order to edge higher, the BTC/USD pair needed to sustain its bullish bias. However, it did not happen. Institutional investors could provide support for the pair as it was in early February. However, large companies are unwilling to invest in an asset that has recently shown very unstable results. For instance, recently, it has shed 7%.

The decline of the crypto asset was also due to the all-time record expiration of options on the BTC/USD pair, which amounted to $ 6 billion. The sellers, who are mostly large companies, took advantage of the current situation, preventing the long-term growth of BTC. Major market participants did not support the sudden wave of interest in bitcoin, and this adversely affected the BTC/USD pair. It fell to a two-week low of $51,5000. As of 13:00 on March 25, the pair have returned to their usual positions. Currently, bitcoin is trading at $ 52.500. 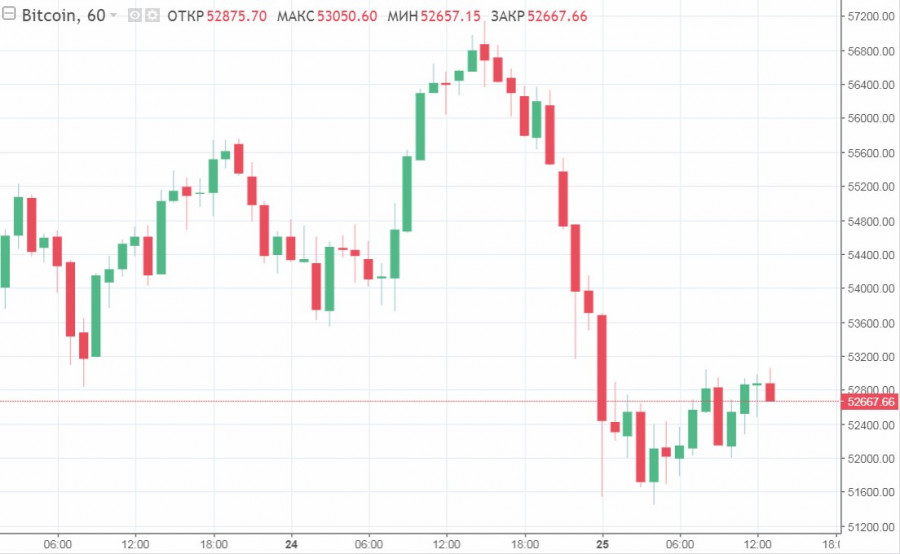 In the near future, bitcoin, as well as the main altcoins, are unlikely to rally, staying mostly below the psychological levels. In addition, due to the outflow of large investors and the lack of coordinated actions between traders on crypto exchanges, the crypto market may slide into a correction. It appeared during the rally of the BTC/USD pair to the level of $ 61, 000. This is why the main cryptocurrencies may continue their downward movement. The BTC/USD pair may roll back to the $50,000 and lower.