No signals to enter the market yesterday afternoon, since volatility significantly decreased. Bears did not seek to sell the pound anymore at new monthly lows, and bulls were in no hurry to return to the market – ignoring good indicators of activity in the UK. The sharp drop in inflation growth once again confirms the weak economic growth at the beginning of this year, which forces investors to take a wait and see attitude even at current lows. 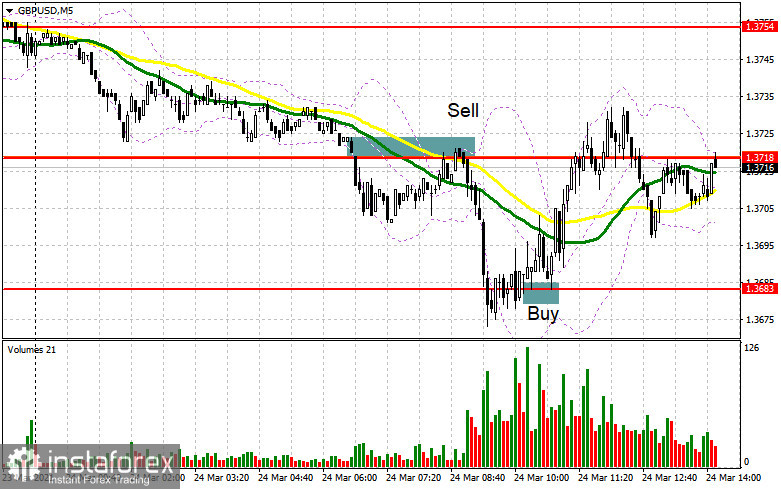 Let me remind you that in the first half of the day, two signals to enter the market were formed at once. Let’s look at the 5-minute chart and analyze the deals: you can see how, after support at 1.3718 had been tested, it breaks out and consolidates below this level. All we had to do was wait for the 1.3718 level to be updated from the bottom up, which would lead to forming a signal to open short positions. Everything happened exactly with the scenario I described in the morning forecast. I marked the moment when the entry point (Sell) was formed on the chart. Immediately after that, the pair fell to the area of the next support at 1.3683, where a signal to buy the pound was formed. A false breakout and a return to this level, with it being updated from top to bottom, created an excellent entry point into long positions, which led to a rapid growth in GBP/USD in the first half of the day. I marked the point to buy the pound on the chart (Buy). 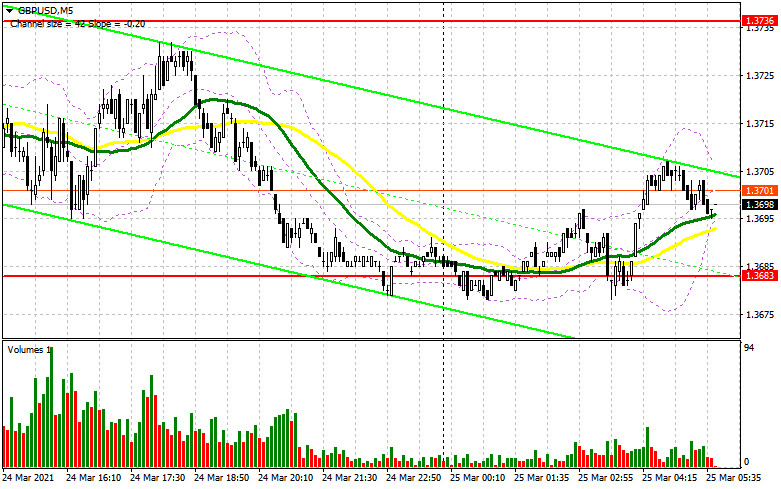 Today, little has changed from a technical point of view. The initial task is to surpass and settle above resistance at 1.3730, where the moving averages pass, limiting the pair’s growth potential. Testing the 1.3730 level from top to bottom, by analogy with the long position, which I analyzed above, creates an excellent signal to open longs in hopes that the pound would recover and reach the resistance area of 1.3789, where I recommend taking profits. If buyers are not active in the 1.3730 area, then I recommend postponing long positions until a new price is formed: all the bulls need is a false breakout in the support area of 1.3680, since this scenario will bring back large players who defended the market yesterday morning and in today’s Asian session. If we do not see another upward movement from the 1.3680 level, then I recommend holding back from long positions until a low like 1.3645 has been tested, from which you can open long positions immediately on a rebound, counting on an upward correction of 20-25 points within the day.

Today we do not have important fundamental reports on the UK, but Bank of England Governor Andrew Bailey is scheduled to speak. His statements could put downward pressure on the pound, which will lead to a new sell-off in the pair. The initial task is to protect the new resistance at 1.3730. Forming a false breakout at this level creates a signal to open short positions in order to continue the bearish market. An equally important task will be a breakthrough and consolidation below support at 1.3680: testing this level from the bottom up will increase pressure on GBP/USD and create a new signal to sell the pound to lows like 1.3645 and 1.3605, where I recommend taking profits. If the bears lose control of resistance at 1.3730 in the first half of the day, then it is better not to rush to sell: the best scenario for opening short positions will be a test of the 1.3789 level, from where you can sell GBP/USD immediately on a rebound, counting on a downward correction at 20-25 points within the day. The next major resistance level is seen around 1.3848. 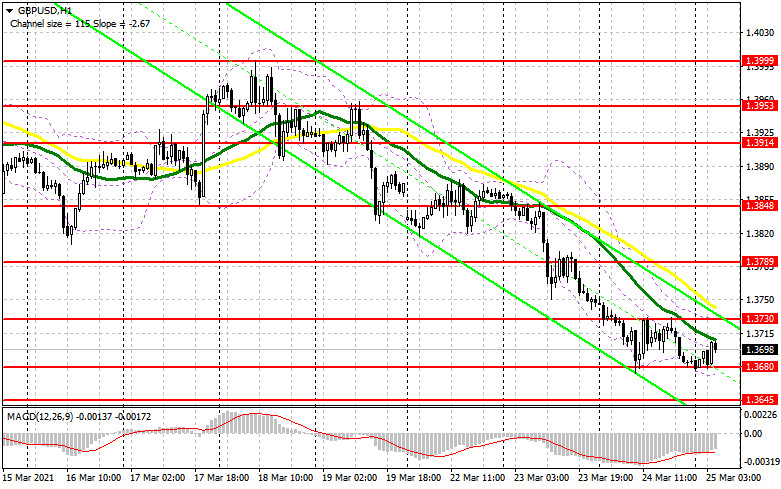 The Commitment of Traders (COT) report for March 15 revealed a reduction in both short and long commercial positions. Once again, the closing of long positions became quite strong, which led to a reduction in the positive delta. The main problem for risky assets, which can be attributed to the pound, is still the growth in the yield of US bonds, which provides serious support to the dollar. However, in the medium term, buyers of the pound will certainly take advantage of this moment to enter the market at more attractive prices, since a good vaccination program will allow more active quarantine measures to be phased out. In the future, this will lead to a major growth in the economy, which will increase inflationary pressures and make the Bank of England seriously think about phasing out stimulus measures and raising interest rates. Expectations of such decisions will have a positive effect on the pound, which will lead to its growth. Long non-commercial positions declined from 61,271 to 55,190. At the same time, non-commercial short positions fell from 27,360 to 26,590, indicating a possible succeeding decline for the pair. As a result, the non-commercial net position fell to 28,600 from 33,911 a week earlier. The weekly closing price remained practically unchanged and reached 1.3898 against 1.3821. The observed downward correction in the pound will attract new buyers.

Trading is carried out below 30 and 50 moving averages, which indicates a continuation of the downward trend for the pound.