No signals to enter the market yesterday afternoon. Despite good and strong macroeconomic indicators for activity in the eurozone, the risk of another lockdown in the EU due to the coronavirus pandemic does not make it possible for euro bulls to break the downward trend. The pair continued to trade in the horizontal channel, as a whole in yesterday’s US session. As for deals in the first half of the day, I drew attention to the 1.1835 level in yesterday’s morning review and advised you to act based on it. The bears are trying to break through support at 1.1835, after which there is an instant sell-off of the euro. It was extremely difficult to catch the market on such a movement, so we had to wait for this range to be tested from the bottom up. However, before the beginning of the second wave of decline for the euro, we returned to the 1.1835 level. A little later, buyers completely defeated it 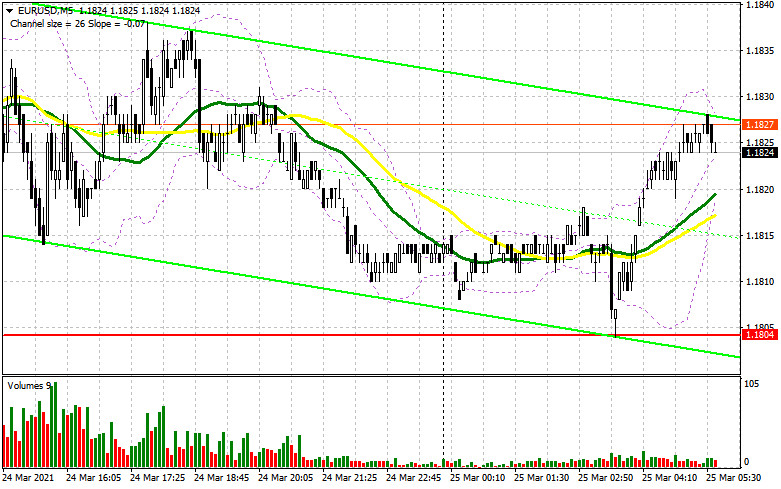 Today we will have another series of speeches from representatives of central banks. In the morning, you should pay attention to European Central Bank President Christine Lagarde’s speech, as it can help bulls return to the market and deal with resistance at 1.1843. Important fundamental reports for the euro area will not be released, so you will have to follow the lending data and the economic bulletin from the ECB. Being able to settle above resistance at 1.1843 and testing it from top to bottom creates an excellent signal to open long positions in hopes of an upward correction, however, the task is complicated by the fact that moving averages, playing on the side of sellers, also pass just above this range. They will seriously limit the pair’s growth potential. The main target after a breakthrough of resistance at 1.1843 is to return to the 1.1892 level, where I recommend taking profits. If buyers are no longer that active once 1.1843 is being tested, and the euro is under pressure in the first half of the day, then I recommend opening long positions only if a false breakout forms in the support area of 1.1804, which has already been tested in today’s Asian session. I advise you to buy the euro immediately on a rebound from a larger low like 1.1760, counting on a rebound of 20-25 points within the day.

Lagarde’s statements may affect the market, so sellers need to think about protecting resistance at 1.1843, just above which the moving averages pass. Forming a false breakout there will lead to creating a signal to sell the euro for the purpose of reaching a low like 1.1804. A breakout and test of this level from the bottom up, along with concerns about the economy and the third wave of coronavirus, which can be voiced by Lagarde, will only increase the pressure on the pair, which then creates a good sell signal in sustaining the bear market. The target will be the 1.1760 low, where I recommend taking profits. If EUR/USD grows above resistance at 1.1843 in the first half of the day: the optimal scenario for opening short positions will be the renewal of the 1.1892 high, from where it is possible to open short positions immediately on a rebound in hopes of a downward correction of 20-25 points within the day. 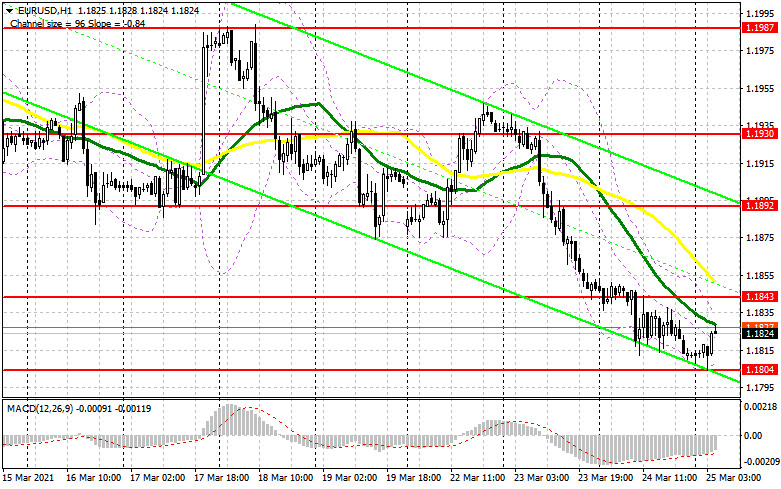 The Commitment of Traders (COT) report for March 15 clearly shows how the sharp reduction of long positions is taking place, however, the growth of those who want to sell the euro is gradually slowing down. Despite this, the market remains on the side of the sellers of risky assets, which may lead to forming a downward trend. This is confirmed by the graph of the euro’s decline, which we have been observing since the end of February this year. The sharp rise in US 10-year bond yields favors the dollar as investors expect America to be the first to start raising interest rates, making the greenback more attractive. The recent Fed meeting has once again convinced investors that the US economy is recovering much faster than expected, increasing the risk of an earlier inflationary jump. At the moment, it is best not to rush into euro purchases, but to wait for lower prices. Another factor in the medium-term pressure on the euro is the rise in the incidence of coronavirus in the eurozone countries and the weak vaccination program. The problems with the Astrazeneca vaccine do not add confidence to investors, who are betting on a stronger summer growth rate for the EU economy. One can expect an improvement in the economic outlook for the eurozone only when restrictions are lifted and the service sector is restored, which will return the medium-term trend of strengthening EUR/USD. The COT report indicated that long non-commercial positions fell from 207,588 to 195,857, while short non-commercial positions only rose from 105,624 to 105,881. As a result, the total non-commercial net position fell from 101,964 to 89,976 for the fifth consecutive week. The weekly closing price was 1.1926 against 1.1812 a week earlier.

Trading is carried out below 30 and 50 moving averages, which indicates that the euro will continue to fall in the short term.