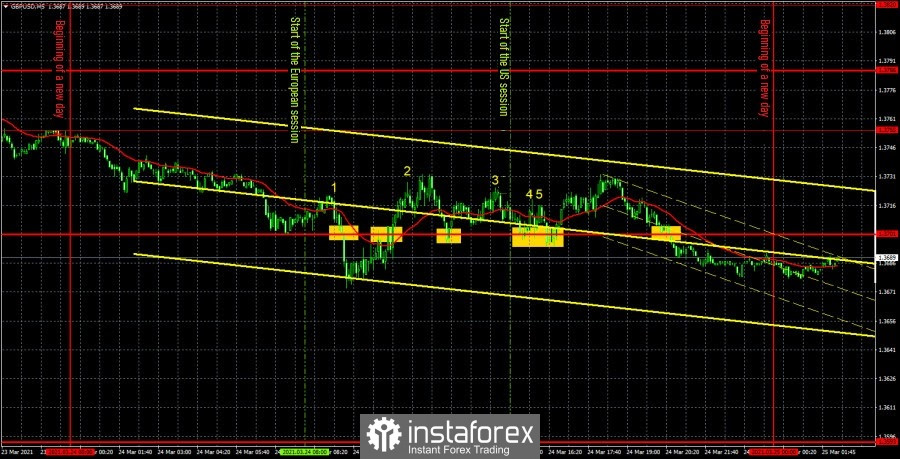 The GBP/USD pair as well as the euro, traded in different directions. A flat was seen for the euro, meanwhile, the pound just moved in different directions. But one way or another, there was no clarity in either the movement or the signals. The European trading session began not with the formation of a signal, but with the publication of the consumer price index in the UK. British inflation unexpectedly fell, which once again confirmed the deplorable state of the British economy and the pace of its recovery after the crisis. The main indicator fell to 0.4% y/y, while the base indicator fell to 0.9% y/y. Traders were disappointed with this state of affairs and new short positions on the British currency began, as a result of which the price settled below the 1.3701 level. However, the bearish momentum dried up very quickly and the upward movement began. There was a rather subtle moment with the sell signal. Firstly, the price went down by about 30 points when it was formed, and secondly, it was provoked by the macroeconomic report, so we can assume that the downward movement would be short-lived. In that case, we would not open deals at all. However, all of the following signals were not much clearer. The 1.3701 level was surpassed from the bottom up for the second time, which made it possible for traders to open long positions. However, the nearest target at 1.3755 was not reached, the trade was closed by Stop Loss at breakeven, as the price still went up by about 25 points. This was followed by two more rebounds from the 1.3701 level, afterwards the price went up by no more than 25 points, so it was not possible to earn on these signals either. The number “2” marks the publication of business activity indices in the UK. This report turned out to be much higher than forecasts, but, as we can see, traders did not react to it. The numbers “3”, “4”, “5” – US reports and the foundation, which were also ignored by traders. As a result, the pair overcame the 1.3701 level again by the end of the day , but, as you might guess, the bears could not go far down, and then the flat began altogether in the evening. 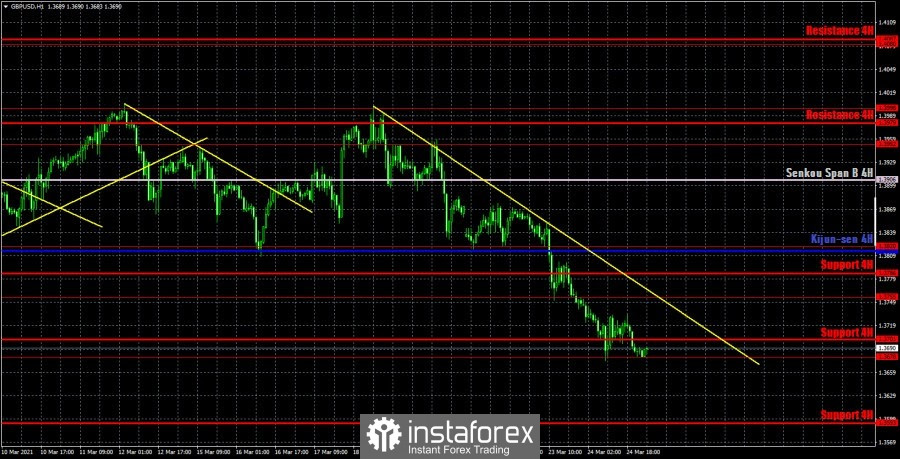 We can see on the hourly timeframe that the pair as a whole maintains a downward trend, which is now supported by the trend line. Therefore, while we are inclined to continue the downward movement, however, as is in such cases, a round of a strong upward movement is not completely ruled out. On the whole, an upward correction would clearly not have been in the way. Getting the price to settle above the downward trend line will show that the bears have exhausted their potential. Today, in addition to macroeconomic reports in America, a speech by the head of the Bank of England Andrew Bailey is also scheduled. However, all of the recent speeches by Bailey, Lagarde and Powell were ignored. Perhaps because the central bank heads did not necessarily say anything new. And so we do not expect any important information from Bailey today. There are no other UK events scheduled for Thursday. In general, we continue to recommend trading from important levels and lines, when rebounding from them and overcoming them. For example, yesterday, a new level (1.3678) was formed, from which the price has already rebounded twice. As before, you should set the Stop Loss level at breakeven when the price passes 15-20 points in the right direction. The nearest level/line is always used as targets. 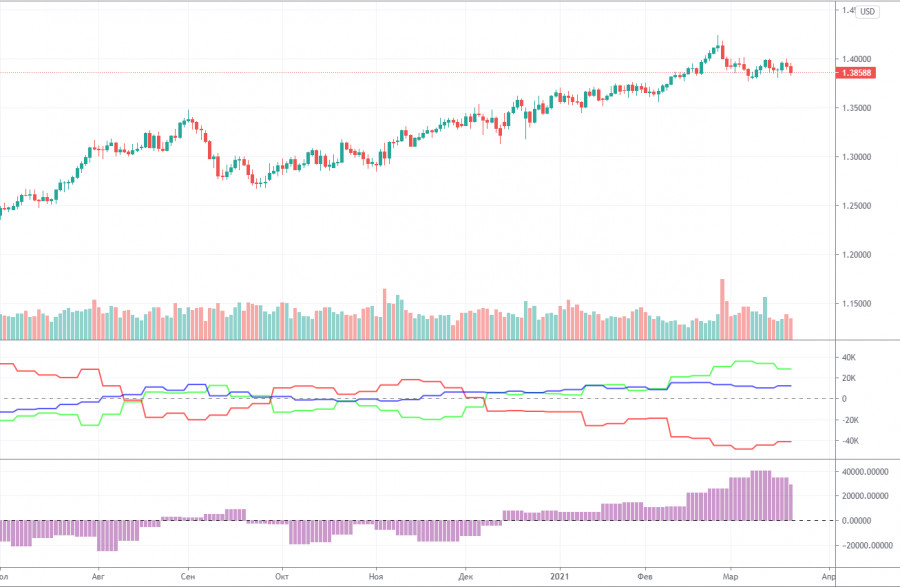 The GBP/USD pair rose by 75 points during the last reporting week (March 9-15). However, this growth is very conditional, since, as we have already mentioned, the last two weeks have been in absolute flat for the pound. As for the traders’ sentiment, recently the “non-commercial” group continued to increase its net position, which testified to the strengthening of the bullish sentiment. It has only been bearish in the past two weeks, including the latest COT report that came out this Friday. A decline in the net position by 6,000 contracts was recorded a week ago, the new COT report showed a fall by another 6,500. Thus, one could even assume the end of the upward trend, however, pay attention to the movement of the first indicator in recent months. The green and red lines, which reflect changes in the net positions of the “non-commercial” and “commercial” groups of traders, constantly changed the direction of movement and were mostly near the level 0. This suggests that the mood of the major players was constantly changing, and the rate of the pound/dollar pair, meanwhile, moved for its own reasons. Thus, the current “signal” about the possible completion of an upward trend is likely to be false. We remind you that the pound is experiencing huge problems in order to show the downward movement. Markets are stubbornly reluctant to get rid of it, and global fundamentals may trigger a new round of the upward trend in the coming weeks.