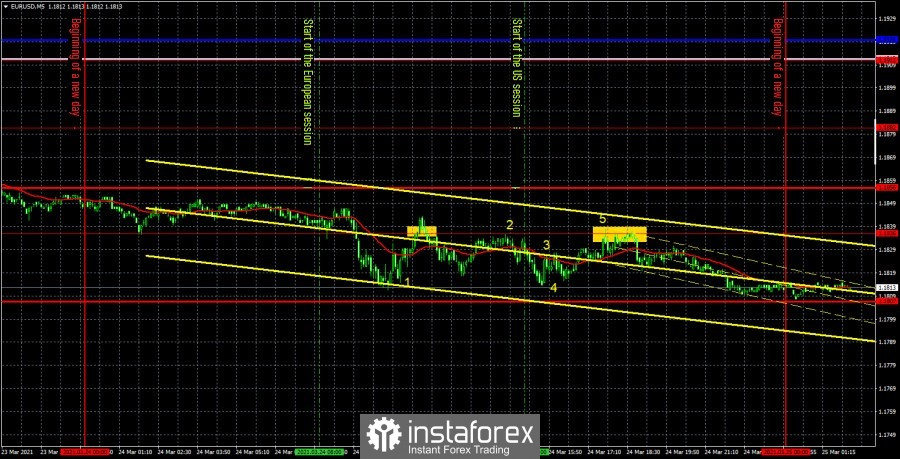 The EUR/USD pair traded in absolute flat all day. Even though the event calendar was full. The numbers in the chart indicate the time of the most important events and when the reports were published. And, as we can see, a strong movement and a sharp price reversal did not take place after any of the events This suggests that traders were not interested in the macroeconomic reports and the foundation on Wednesday. Let’s try to understand everything in order. A seemingly downward movement began at the beginning of the European trading session, which has been observed in recent days. Getting the price to settle below the extremum level of 1.1836 could be regarded as a sell signal, and the closest target was the support level of 1.1807. However, the downward movement, to put it mildly, did not continue, and the target was not achieved. Therefore, the deal on this signal should have been closed by Stop Loss or manual closed at zero profit. After that, the price returned to 1.1836, from which it either rebounded or overcame it. As it turned out later, it was still a rebound. However, at this point, traders could have made a mistake and opened a long position. Also, the indexes of business activity in the services and manufacturing sectors in the European Union were published around this time, which turned out to be much better than the forecasts, therefore, they could provoke an increase in the euro. But, as you can see, the reaction was not too strong – only 15 points up. As a result, the rebound from the 1.1836 level is a new sell signal, according to which the pair again failed to reach the target level of 1.1807, although it is located only 30 points away. The number “2” marks the publication of a report on orders for durable goods in the United States, which turned out to be worse than forecasted, but afterward the dollar still began to rise in price. The number “3” is the indices of business activity in the services and manufacturing sectors of the US, which turned out to be worse than forecasts, but better than the previous values. “4” and “5” – speeches by Jerome Powell and Christine Lagarde. As you can see, afterwards, nothing has changed much. As a result, a new sell signal was generated in the form of another rebound from 1.1836, and according to the last signal, traders still managed to earn a bit, and even then, if they accompanied the transaction until the evening. So today traders could have finished the day with a slight loss, as there was a flat throughout the day, and most of the foundation and macroeconomics were ignored. 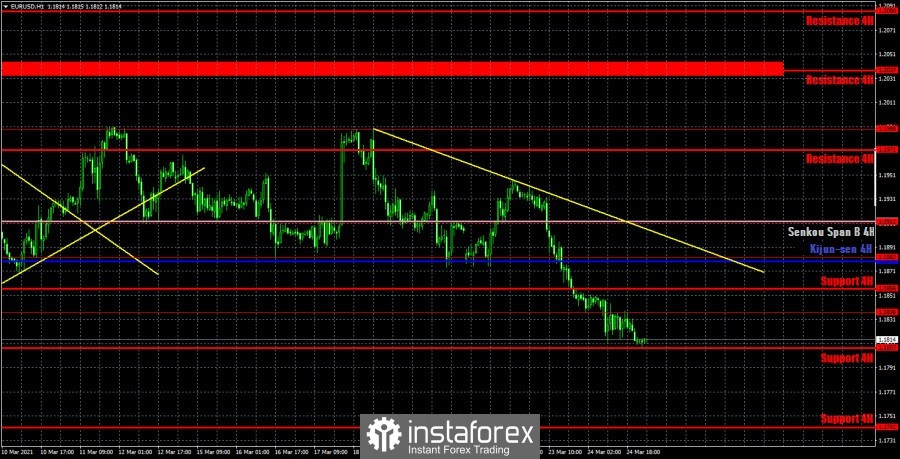 On the hourly timeframe, we see that, in general, the euro/dollar pair continues to move to the downside and crosses the lower border of the assumed horizontal channel at 1.1836. So formally, the price just left the horizontal channel, but at the same time, the movement from the last few days were quite strong, so an upward correction is expected now. A downward trend line has appeared, which supports bearish traders and also indicates a downward trend. European Central Bank President Christine Lagarde will speak again. Meanwhile, in America, the GDP for the fourth quarter, as well as data on applications for unemployment benefits, will also be published on Thursday. In general, you should still trade from important levels and lines that are plotted on the hourly timeframe. The closest level is 1.1807. Signals can be rebounds and when levels and lines are surpassed. Do not forget about placing a Stop Loss order at breakeven if the price moves 15-20 points in the right direction. This will protect you against possible losses if the signal turns out to be false or a sharp reversal occurs after some fundamental or macroeconomic event. 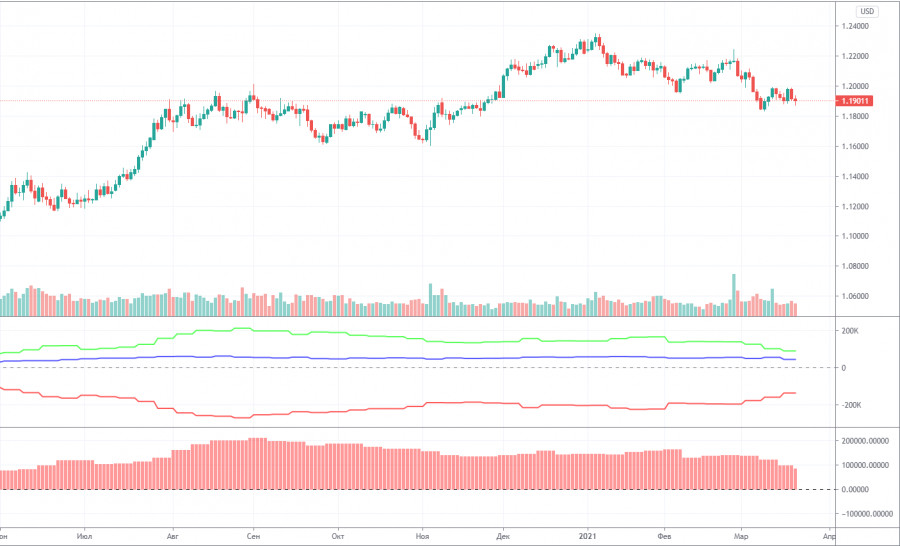 Recall that the EUR/USD pair did not grow and did not fall by a single point during the last reporting week (March 9-15). Despite the fact that the downward movement is not too strong, market participants continue to actively get rid of buy (longs) contracts for the European currency. Look closely at the chart above. The green and red lines of the first indicator diverged as much as possible around September last year. Then we said that the upward trend is nearing its end. But instead, thanks to trillions of dollars poured into the US economy, the dollar continued to fall. However, in comparison with the September highs, the bulls failed to take the pair farther up. At the moment, the 2.5-year high is located near the 1.2350 level. And the green and red lines of the indicator, which represent the net positions of non-commercial and commercial groups of traders, tended to narrow all this time. That is, roughly speaking, a downward trend could have begun in September last year. Now, the green and red lines have accelerated their movement towards each other. In the two weeks leading up to the last COT report, the non-commercial group closed 22,000 Buy contracts (longs) and opened 22,000 Sell contracts (shorts). This is a very serious change for the most important group of traders. The latest COT report, which was released yesterday, showed that professional traders continued to get rid of purchases of the euro during the reporting week and closed another 12,000 Buy contracts. Thus, the mood of the major players became even more bearish. This all adds up to an excellent outlook for a downward trend, but be careful! We believe that global fundamentals could again have a strong impact on the EUR/USD pair in 2021. You have to understand that the global crisis is not over yet!