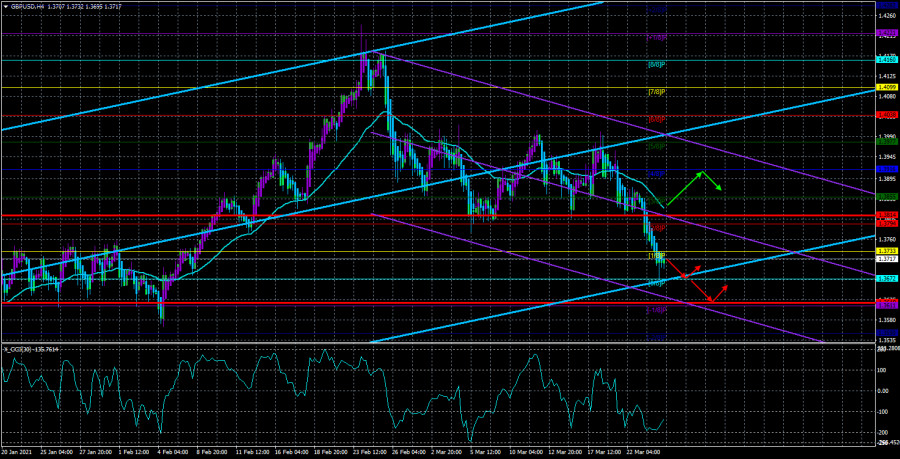 The British pound was also trading lower on Wednesday, so both major currency pairs have been falling in the past few days. This suggests, first of all, that the reasons for this movement lie in the United States, and not in the European Union or the United Kingdom. And if so, we need to look for the fundamental reasons for the growth of the US currency. What can they be at this time? What has happened to be optimistic in recent weeks that the US dollar has perked up and started to be in demand in the foreign exchange market? At first glance, everything is banal and simple. We have already said more than a dozen times that the US dollar paired with the British pound has been falling for almost 1 year. Thus, the movement that is observed now can be (and is in fact) a downward correction against the global trend. Thus, the fundamental reasons could and will not be needed for the pair to start falling, and the dollar to grow. After all, the correction begins not only when there are fundamental reasons for it. Thus, it is likely that the entire “foundation” now does not play any role for market participants. Of course, you can always say that the American economy is growing – and this is the main thing! But we remind you of several facts that should reassure readers that the growth of the US dollar is a consequence of the high pace of economic recovery. First, it should be recalled that the US economy at the very beginning of the pandemic and the crisis collapsed by 31.4%, that is, much stronger than the British or European economies. After this happened, the US authorities and the Fed began to pump it with money, which caused a faster recovery than many expected. However, at what cost? At the cost of printing trillions of dollars and increasing the total public debt to 101% of GDP. Thus, any economy in the world can show growth. Print as much money as you want and invest it in your economy. However, not all countries of the world can afford this option. But what these trillions of dollars will turn into in the future – we’ll see. After all, they will not be removed from the economy as easily as they were poured into it. In general, in our opinion, the United States is now walking on thin ice, the failure of which can lead to serious collapses in the stock market, in the bond market, and lead to a new crisis in the future. However, so far the Fed is not too worried about this. Jerome Powell said: “The massive borrowing during the epidemic served as a bridge across the economic divide. Cheap loans made it possible to pay off employees rather than lay them off, and to keep assets in working order. The loans were also used to finance unemployment benefits for the laid-off so that they could pay their bills and buy food.” In any case, the US national debt is not a pressing problem for the country. It has been growing for decades and so far nothing bad has happened. It is also important how much it costs to service this national debt, and not what it is in size. Current bonds have extremely low yields, often below inflation. Thus, the high US national debt is even more of a problem for America’s creditors, and not for America itself.

Meanwhile, the European Union has decided to tighten the rules for the export of vaccines. The European Commission decided on March 24 to expand its powers in this matter. Simply put, the European Commission wants to be able to block the supply of vaccines produced in the EU to the UK or any other country. Recall that in the European Union over the past few weeks, there has been a vaccination crisis. There are not enough vaccines, but pharmaceutical companies that do not fully fulfill contracts with the EU continue to send vaccines abroad, in particular to the UK. First of all, we are talking about the recently sensational AstraZeneca vaccine, which is now approved in the EU, then banned, then investigated. However, European officials also assure that there is no talk of a complete block on the export of vaccines. We are talking only about some manufacturers, which will help avoid a shortage of vaccines in the EU. Naturally, the UK is categorically opposed to such a decision by the EU authorities and insists that all the batches of vaccines ordered by it be delivered. It is also reported that we are talking about vaccines from those manufacturers that have not fulfilled contracts with the EU. These are AstraZeneca and Johnson & Johnson. There will be no ban on the export of Pfizer and Moderna vaccines. Potentially, this is another round of heated relations between London and Brussels. However, how many times have we seen such turns recently?

Thus, in general, we can say that the British currency is now falling, and the dollar is growing, without obvious fundamental reasons. There is a lot of news, the fundamental background is quite strong, but often it does not even coincide with what is happening in the market. 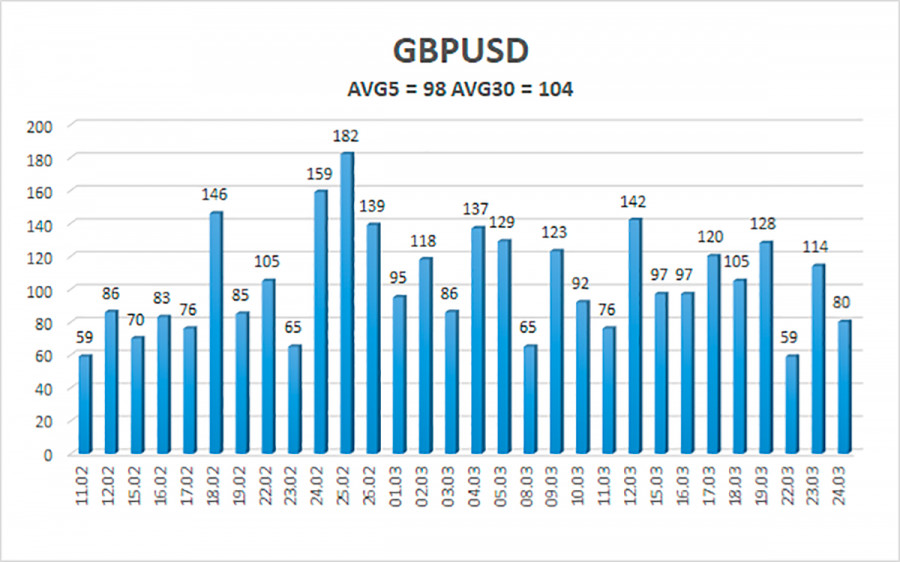 The average volatility of the GBP/USD pair is currently 98 points per day. For the pound/dollar pair, this value is “average”. On Thursday, March 25, therefore, we expect movement within the channel, limited by the levels of 1.3618 and 1.3814. A reversal of the Heiken Ashi indicator to the top can signal a new round of upward movement.