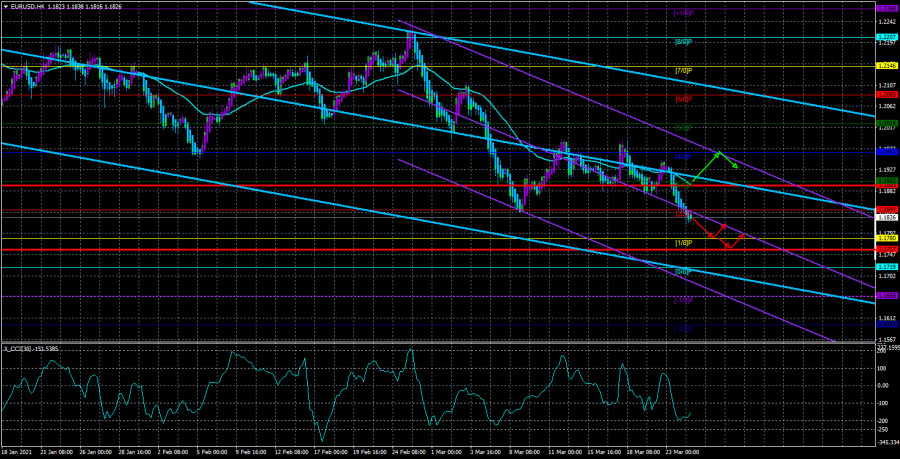 The EUR/USD currency pair resumed its downward movement on Wednesday, March 24, meaning that the US dollar began to strengthen again. However, we still do not recommend making it a tragedy. We remind market participants that we are currently observing the most banal downward technical correction. And it can not even be called a big one, although the euro/dollar pair has been adjusted in total for almost three months. Is it possible to consider a strong strengthening of the dollar by 4 cents in three months? And even after the same dollar fell by 17 cents in the previous 10 months. Of course not. Thus, we continue to believe that the US currency can resume falling almost at any time. You should take into account a huge number of fundamental factors that may have an impact on the dollar or the euro. For example, there is a vaccination crisis in the European Union: there is a serious shortage of vaccines, the rate of vaccination is very weak, the EU government is criticized by its own countries, many members of the alliance openly declare an unfair distribution of vaccines, where rich countries receive more than poor ones. Also, in some countries, there is an increase in cases of “coronavirus”, so many are talking about the third “wave”. Some countries have already tightened quarantine restrictions, some are going to introduce a third “lockdown”. Naturally, all these events cannot go unnoticed by the markets. But do traders react to them? As we said above, the entire current process of the fall of the pair can be caused by banal profit-taking on long positions. We recommend paying attention to the latest COT reports, which clearly show that large players are getting rid of buy-contracts. What does that mean? That they fix the profit on them. That is, the current correction may be a purely technical phenomenon that has nothing to do with the vaccination crisis in Europe.

Next, you can pay attention to what is happening in the United States. They have just approved one package of stimulus measures for $ 1.9 trillion and have almost announced a second one, which could amount to another $ 3 trillion. That’s potentially another $ 5 trillion for the American economy. Recall that approximately the same amount was poured into the economy during 2020 and this led to a strong fall in the dollar. Thus, we are still inclined to the option that the depreciation of the dollar will continue in 2021. It should also be noted that despite the “bearish” factor for the dollar in the form of a strong increase in the money supply, there are also positive aspects. For example, the fact that the US economy continues to recover at a high rate and is likely to continue to do so in 2021. Such an economy will attract investment better than the European economy, which has been stalling this winter (the fourth and first quarters are in the “minus”) and may continue to stall in the second quarter if new “lockdowns” begin now. However, there is a double-edged sword here. The US economy recovered at a high rate at the end of 2020, but then the US dollar continued to fall. From all of the above, it follows that in the long term, we expect the upward trend to resume. In the medium term, the downward movement may continue.

It should also be noted that in recent days, there have been several quite important speeches by the first US economists. For example, on Tuesday, Treasury Secretary Janet Yellen and Fed Chairman Jerome Powell spoke before the Financial Services Committee of the US Congress. I would like to note at once that both functionaries did not say anything that could cause a surge of emotions in the foreign exchange market. And the text of their speech became known long before the speech itself. In short, Powell expects inflation to accelerate this year and notes the high pace of economic recovery. However, what does this “waiting for inflation to accelerate” mean in practice? This means exactly what Powell said, not what the markets thought. If Powell and the Fed are waiting for acceleration, it doesn’t mean that this acceleration will happen with a 100% probability. Moreover, inflation may rise to 2% and immediately fall back. Recall that a huge amount of money has been poured into the US economy and the same amount may be poured in this year, but many factors also work against inflation. For example, the fact that during the epidemic, Americans became much more thrifty. Money is not spent – inflation is not rising. After all, what difference does it make how much “helicopter money” was dropped, if it immediately settled under the pillows of the American population and is not spent on goods and services? He told the US Congress that he does not expect the price pressure to be significant and long-term. He also noted that the Fed has enough tools to fight high inflation. Also, there is no question that the Fed will stop supporting the economy by buying assets from the open market. This was stated by several members of the Fed’s monetary committee. And as a result, we get only general information that the markets knew even without Powell’s speech in the US Congress. Thus, from our point of view, the current growth of the dollar can hardly be related to the events that occurred this week. 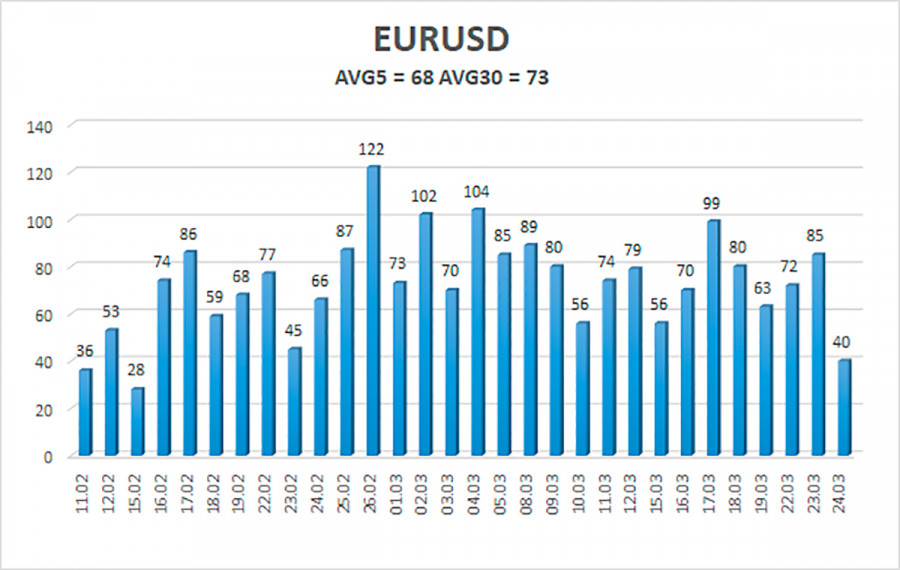 The volatility of the euro/dollar currency pair as of March 25 is 68 points and is characterized as “average”. Thus, we expect the pair to move today between the levels of 1.1757 and 1.1893. A reversal of the Heiken Ashi indicator to the top will signal a new round of upward movement.

The EUR/USD pair continues its downward movement. Thus, today it is recommended to stay in short positions with targets of 1.1780 and 1.1757 until the Heiken Ashi indicator turns up. It is recommended to consider buy orders if the pair is fixed back above the moving average, with a target of 1.1963.