The cryptocurrency market has been in an uncertainty period for the last week, and asset quotes have not broken through the previously set boundaries. However, this situation drastically changed on March 24, when Tesla Motors implemented a previously announced innovation – it allowed its US customers to pay their products with Bitcoin. The news stimulated the market, and so, the quotes of the BTC/USD pair surged by 7% in a few hours. However, we should control ourselves, as this event is not an assurance that there will be a new stage of development for the crypto market.

In any case, Tesla has renewed public interest in the cryptocurrency market, giving ordinary people the opportunity to pay with digital assets. This is the first major company to implement such a feature for a wide range of people. An important role in the launch of this service was played by the statement of the company’s representatives that Tesla will not transfer the received bitcoins to fiat currencies. This is an important announcement in the context of how the market and the public should perceive cryptocurrencies. 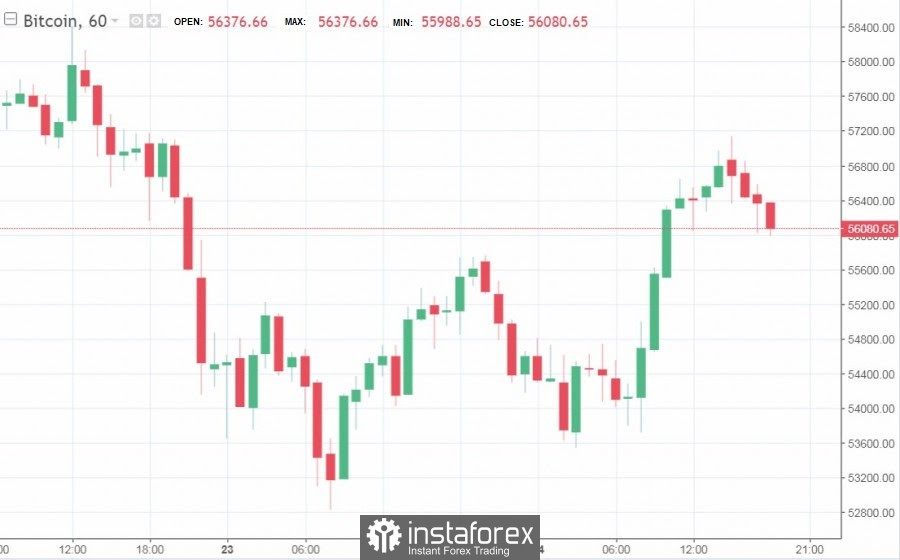 In view of such an unexpected but favorable coincidence, Bitcoin quotes have remained above the psychological level of $ 55,000 for the H4 period, but it is still lacking. Tesla has given impulse, and now, it is necessary for the market to support it. So far, retailers are getting interested, but the BTC/USD pair must attract large companies that entrust their investments to the cryptocurrency market in order to have a complete and stable growth. The main positivity is that there is every prerequisite for institutional investors to follow Tesla’s lead, as they did in early February.

On March 23, the market experienced a consolidation, although bitcoin quotes fell to $ 53,000. Market participants jointly increased the trading volumes of the crisis bitcoin, but the percentage of large investors in this process was low. Currently, large companies have the necessary reason to invest in the main digital asset at the right time and expect profit amid the growth of the entire market.

However, institutional investors may not follow Tesla’s lead without taking the risk. This is a likely scenario based on the unstable movement of digital assets during the previous week, as well as the deteriorating economic indicators amid the third wave of the coronavirus pandemic. The reaction of the market is now unpredictable, but it will definitely have a decisive effect. With large companies supporting Bitcoin, the market can be overwhelmed by a positive wave just like in February, which guarantees new capitalization records. If institutional investors want to trade carefully and wait for more ideal positions of the BTC/USD pair, then the leading cryptocurrency will decline below $ 55 thousand and may enter a prolonged period of consolidation.