GBP/USD dropped below 1.37 psychological and under the uptrend line confirming a larger correction ahead. USDX’s further growth boosted the greenback which it has increased versus its rivals and not only against the Pound.

On the other hand, the US Flash Services PMI increased from 59.8 to 60.0 points failing to reach 60.1 expectations, while the Flash Manufacturing PMI jumped from 58.6 to 59.0, below 59.6 expected. Surprisingly or not, the USD remains strongly bullish even if the Durable Goods Orders dropped by 1.1% versus 0.7% growth expected, furthermore, the Core Durable Goods Orders registered a 0.9% drop, the specialists expected a 0.6% increase. 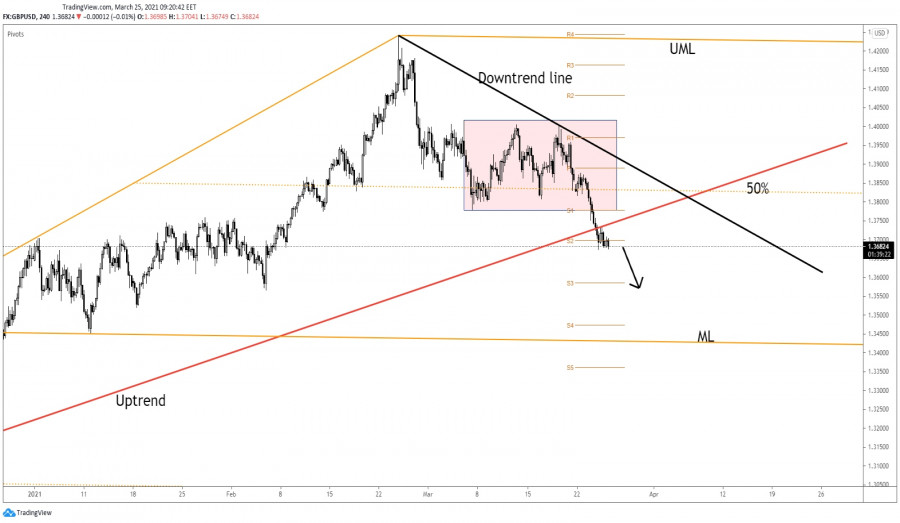 GBP/USD dropped under the major uptrend line after registering a breakdown from a minor range. It has retested the broken uptrend line signaling a further drop. It’s traded at 1.3672 under the S2 (1.3697) broken static support indicating a sell-off.

The bearish bias remains intact as long as it stays under the black downtrend line. The major descending pitchfork’s median line (ML) could attract the price after the breakdown below the 50% Fibonacci line.

Closing below 1.3673 is seen as a selling opportunity. The S3 (1.3585) represents the next downside target. The short-term major target stands at the median line (ML).