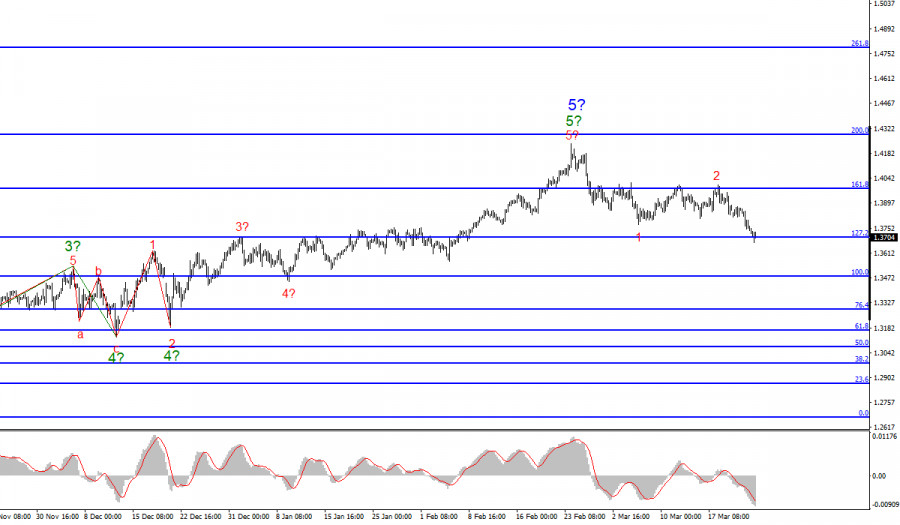 For the Pound/Dollar instrument, the wave pattern, after making adjustments, looks more convincing. At this time, waves 1 and 2 of the new downward trend are clearly visible. They can also be waves a and b, but for now, I consider them still as part of a new impulsive trend section. Inside the supposed wave 3, internal waves are not visible, so it is difficult to predict when this wave will end and what will happen next. However, a successful attempt to break through the 127.2% Fibonacci level will indicate that the markets are ready for new sales of the Pound/Dollar instrument. Thus, the decline in quotes may well continue with targets located around the 35th figure, given the overall rise in the US dollar in the market.

In the case of the euro, I concluded that the markets did not pay any attention to the statistics and speeches of Powell and Yellen, but in the case of the sterling, such an unambiguous conclusion cannot be drawn. Early this morning, the inflation report in the UK for February was released, and unexpectedly for many, it fell sharply. The consumer price index was only 0.4% y/y, although the markets expected to see growth in comparison with the value of the previous month, core inflation also fell to 0.9% y/y. Thus, the fall of the sterling during the present day seems to be natural. However, literally, a few hours later, the business activity indicators in Great Britain for March were released. It turned out that both areas grew significantly compared to the previous month. The service sector – from 49.5 points to 56.8, and the manufacturing sector – from 55.1 to 57.9 points.

Thus, the market reaction in the form of purchases of the sterling would be more logical here. The pound sterling rose slightly on these reports, but after that, the decline in the instrument’s quotes resumed. Therefore, I conclude that the markets, in any case, were set to buy the US dollar, and the statistics from Britain had only a very small impact on their mood. This afternoon, Janet Yellen and Jerome Powell spoke for the second time in the US Congress, this time before the Banking Committee, but the text of their speech did not differ from yesterday’s speeches, so there was no reaction from the markets. In America, a report on orders for durable goods was also released, and its values turned out to be worse than market expectations. Also worse were the indices of business activity in the service and manufacturing sectors in the US at the end of March. However, the demand for the US currency did not subside, which further convinced me that the markets were in any case set to buy the US dollar today. Consequently, in the Pound/Dollar instrument, wave counting is now of priority importance.

Based on the performed analysis, I recommend selling the instrument after a successful attempt to break through the level of 1.3704 with targets located near the 35th figure. 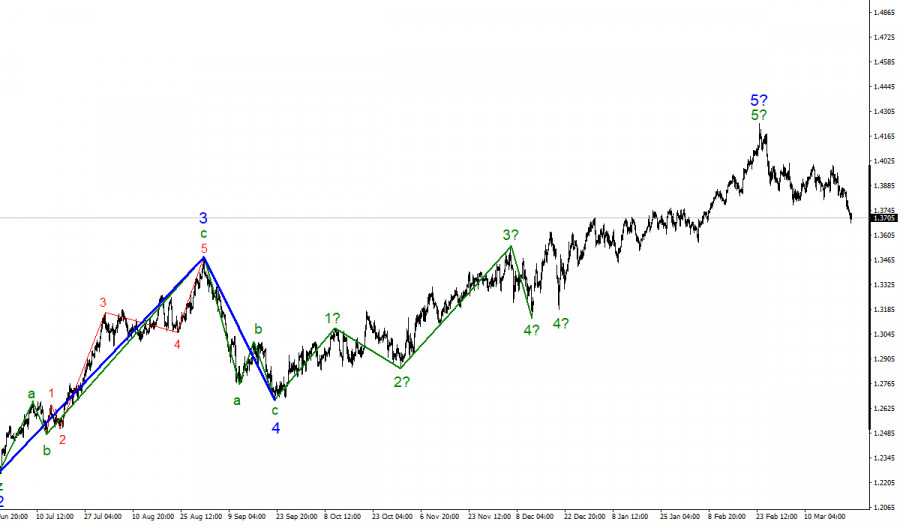 The part of the trend originating on September 23 took a five-wave fully completed form. But the internal wave structure of the supposed 5-5 wave still looks not entirely convincing and may require some additions and adjustments. At the moment, I consider the upward trend part to be completed, so I expect the construction of a global three-wave downward trend.