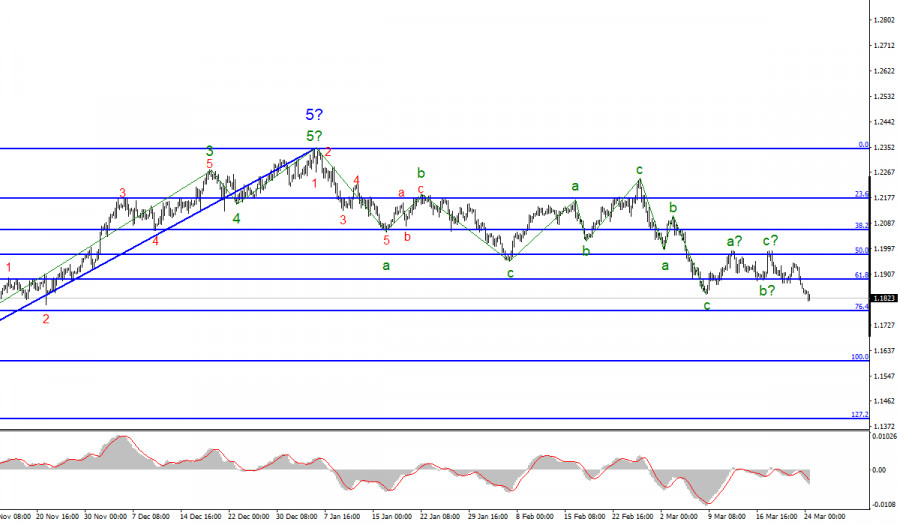 The wave counting on the 4-hour chart nevertheless took on a more non-standard form, since the markets did not manage to overcome the 50.0% Fibonacci level. However, after making some minor adjustments, it becomes clear that the decline in quotes continues within the framework of the wave counting that I initially assumed. That is, the assumed wave d turned out to be somewhat shortened and rather weak, but after it, as I expected, a new downward wave, assumed e, began to form. Yesterday, I assumed that the decline in the instrument will continue with targets located near the 76.4% Fibonacci level. So far, this forecast is completely coming true. Now the question is, what will happen after the completion of the wave structure a-b-c-d-e. Most likely, the construction of a new upward trend section will begin, but it is still difficult to say what form and shape it will take.

A fairly large number of events were planned in the news calendar yesterday. Most of these news and events did not have any impact on the mood of the markets. The speeches by Jerome Powell and Janet Yellen in the US Congress were absolutely insipid. Both of them only presented to Congress the information that the markets had long known. The main theses were as follows. 1) The economy is recovering at a high rate. 2) However, “to the end” there is still a very long way to go. 3) More stimulus will be needed to keep the pace of recovery steady. 4) Inflation should accelerate in 2021. 5) All monetary incentives will remain in effect for a long time.

Thus, the decline in the instrument’s quotes, which means the strengthening of the US dollar, can hardly be linked to this information. Although, it also cannot be denied that when the Fed chairman is optimistic about the future of the economy, this positive charge can be transferred to market participants. However, remember how many such performances Powell had over the past year. I believe that the wave counting is more important now than the news background. The evidence for this is very simple. Today, the European Union has released fairly positive business activity indices in the service and manufacturing sectors. They could have caused an increase in demand for the euro, but instead, the instrument’s quotes continued to decline. This means that the markets did not pay any attention to these reports. Where then is the guarantee that they paid attention to yesterday’s speeches? I also would like to draw your attention to the fact that all the waves that are being built now look convincing enough, as in the textbook. This often happens when third-party factors do not influence the wave counting. If every day the market received news that would greatly affect it, would the wave counting be so beautiful? 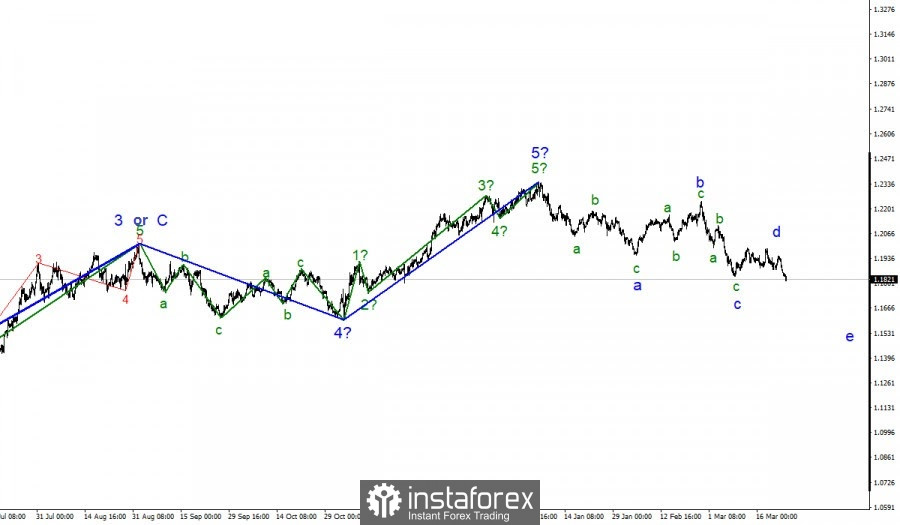 The wave counting of the upward trend section still has a fully completed five-wave form and is not going to get complicated yet. But the section of the trend, which began its construction immediately after it, takes on a rather complex form. The instrument is likely to build alternating corrective structures for some time. The supposed wave d turned out to be shortened, so the construction of the supposed wave e has already begun.