Over the past day, the situation in the cryptocurrency market unexpectedly changed. Fixed assets showed slight growth and approached historical indicators. However, it is not worth counting on prolonged growth and opening long margin positions of the BTC/USD and ETH/USD pairs. The current increase in the quotes of individual cryptocurrencies is the result of a combination of circumstances and high market volatility.

Also, the rise in prices for major cryptocurrencies was the result of the market dependence on bitcoin performance. After a sharp decline, to $53,000, the BTC/USD pair rose by $3,500. The positive wave was picked up by retailers, who allowed the asset to stay above the psychological threshold of $55,000. The main reason for the sharp rise in the value of bitcoin was the positive news background, supported by the actual actions of large companies.

First of all, it became known that the South Korean communications giant Naver began negotiations to buy a stake in one of the largest cryptocurrency exchanges – Bithumb. The second important news was the statement from representatives of Tesla Motors saying that their customers can now purchase cars using Bitcoin. A similar feature will soon appear in other parts of the world.

Against the background of this news, the quotes of the BTC/USD pair increased by 5.5% and consolidated at the level of $56,500. The sudden announcement from Tesla attracted another wave of attention to bitcoin, which could subsequently save the digital asset from a price correction that was chasing the currency after another record ($ 61,000 in mid-March). However, it is too early to rejoice, because the positive dynamics of growth in the price of the BTC/USD pair are created by retailers who are unable to provide the currency with the necessary margin of safety for stable growth.

Also, one should not expect an increase in quotes for the main altcoins, the current growth of which is directly related to the local success of the BTC/USD pair. The situation with the Tesla announcement only highlighted the volatility of Bitcoin and the uncertainty of the market. The price spike occurred in just a few hours, which was a negative signal for institutional investors. This jump proved that the quotes of the BTC/USD pair are unstable and the currency is not ready for full growth. Given the dependence of other digital assets on BTC indicators, it becomes clear that market indicators will return to negative dynamics soon, and large investors will ignore the unexpected surge in the value of the BTC/USD pair. 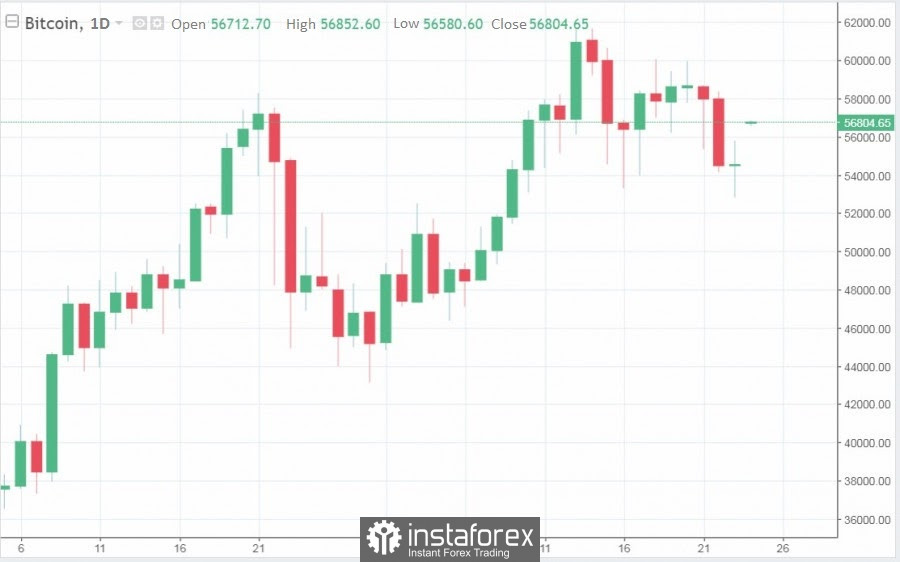 As we can see on the chart, the BTC/USD pair has already started to fall below $55,000. There is no doubt that today, March 24, bitcoin quotes will try to overcome the psychological threshold, however, without the support of large market players, the asset will not gain a foothold on safe indicators.