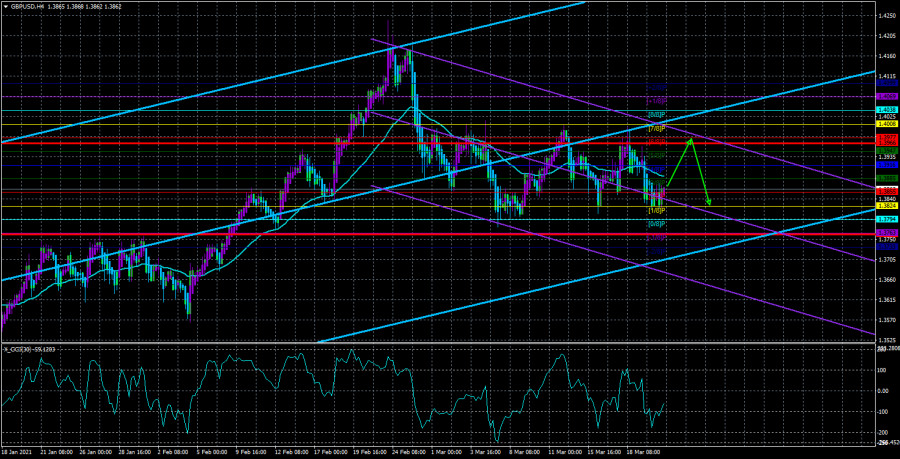 The pound sterling was trading more than calmly at the auction on Monday, March 22. In principle, nothing remarkable happened in the markets on this day, so it is impossible to conclude that the pair’s movement was provoked by any events. Because there were no real events. Thus, the pound sterling continues to be close to its local lows, and market participants continue to be in doubt as to how to trade the pair further. We have repeatedly listed the entire list of factors that have or may have an impact on the pound/dollar pair at this time. From our point of view, two factors play a key role: “speculative” and the factor of pouring huge sums into the American economy. It is these two factors that we can explain the persistent unwillingness of the pound to adjust. Recall that the pound/dollar pair has been correcting for only a few weeks and managed to go down about 450 points during this time. At a time when only the last ascending segment lasted about 5 months and the pair grew by 1,600 points during this period. And if you take the whole upward trend, which began a year ago, the figures are even more impressive. And this is all against a failed fundamental background from the UK. And this is not just our opinion. More and more British journalists, economists, and political scientists are beginning to pay attention to the huge number of diverse problems that the UK has already faced or will face in the near future. By and large, there is only one plus that can be singled out now – vaccination in the country is moving at a high pace. Thus, in the summer, the entire adult population of the country can be vaccinated. If there are no more surprises with the “coronavirus”, then the UK will be one of the first in the world to end the epidemic and embark on a full-fledged recovery path.

However, this is all good news regarding Britain and the pound. As we said above, more and more experts are turning their attention to deep structural problems. For example, in the first month of 2021, the volume of import-export transactions between the EU and the UK collapsed by 40%. For example, on the border between Northern Ireland and Ireland, a conflict is already brewing, thanks to which the bloody war that lasted on the island for 30 years and ended only in 1998 can be resumed. For example, the European Union has launched a legal procedure regarding non-compliance with the conditions of the “Northern Ireland Protocol” by London. For example, the date of May 6 is inexorably approaching, when parliamentary elections will be held in Scotland, in which, according to everyone, Nicola Sturgeon’s party will win, consolidating its leadership and further increasing the chances of initiating an independence referendum. By some miracle, GDP grew by 1% in the fourth quarter. However, this is only the first estimate. Recall that already at the end of January, GDP fell by 2.9%, so the final value for the fourth quarter may be much lower than 1%. In the first quarter of 2021, the British economy will shrink almost one hundred percent. Therefore, both winter quarters will bring nothing to the British economy, except for “minuses”. Further, do not forget that the UK will not emerge from the pandemic crisis “clean” in terms of debt. The country has also increased its national debt. The holes in the state budget will need to be patched up with something, and they can only be patched up by raising taxes, which in the future may also turn into a drop in growth rates. British treasury bonds are also rising in yields, as investors also expect a strong jump in inflation in the next year or two. Therefore, ten-year bonds with an income of about 1% per year do not interest them at all. Especially now, when there is an ever-growing US stock market or bitcoin. Based on all of the above, only one conclusion can be drawn. If traders reacted to all this fundamental background, then the pound could already be caught near the 30th level. Or maybe even lower. Not only does the pound manage to grow with such a disgusting “foundation”, but it can’t even really adjust. Thus, it is simply impossible to draw other conclusions, except about the “speculative” factor and the factor of a strong imbalance between the money supply of the UK and the US. However, now there is a paradoxical situation in which almost all fundamental and technical factors speak in favor of the fall of the British currency. However, they are ignored by the markets. But just one or two factors “for” the growth of the pound can lead to a new round of the upward trend. In principle, it is the resumption of the upward trend that we are waiting for in the near future. We believe that the attempts that the bears have shown recently will not allow them to take the pair far down. Thus, we should wait for the resumption of the upward trend. At the end of the article, I would like to note that first of all, now we should pay attention to the technical aspects. “Foundation” and” technique ” are not the same now, so we should look for confirmation of this or that hypothesis. At this time, the entire movement of the pair generally looks like a flat between the levels of 1.3800 and 1.4000. Thus, to begin with, you should understand what will happen near the lower line of this channel, near which the price is now located. Will the quotes go out of the channel or will the pair start a new round of movement to the 40th level? 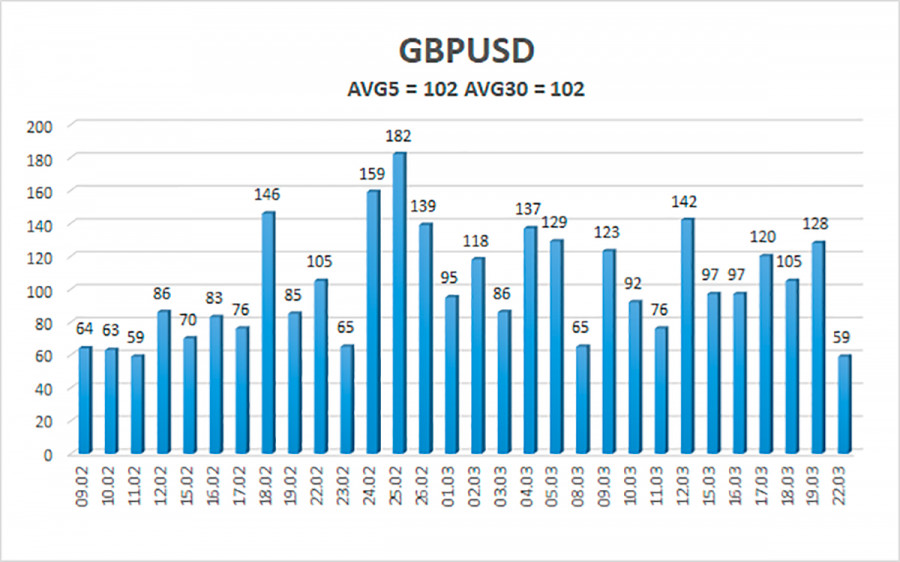 The average volatility of the GBP/USD pair is currently 102 points per day. For the pound/dollar pair, this value is “average”. On Monday, March 23, thus, we expect movement within the channel, limited by the levels of 1.3761 and 1.3966. A reversal of the Heiken Ashi indicator back down may signal a new round of downward movement.