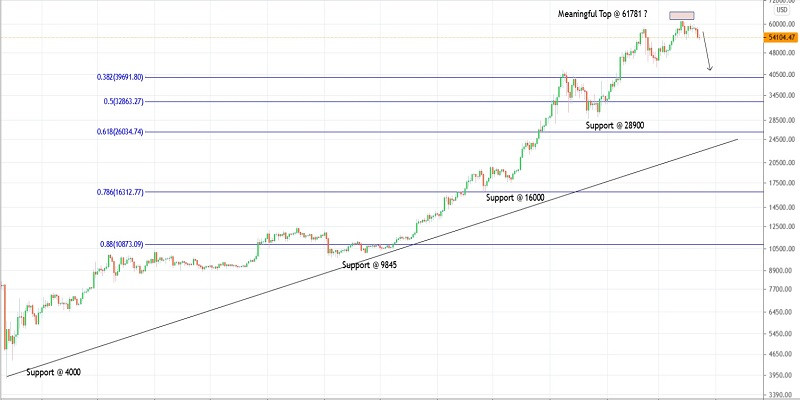 Bitcoin slips to $52,900 levels today and we are not surprised. A drop further below $52,600 would confirm that a meaningful top is in place at $61,781 mark over the last week and also bears are back in control. The crypto would be a good case to be sold on rallies thereafter with risk above $62,000 mark. Aggressive traders might have initiated shorts already as suggested yesterday from around $57,000 levels.

The crypto has pulled off day’s lows and is seen trading around $54,400 mark but remains vulnerable for yet another drop below $52,600 at least. Immediate resistance remains fixed at $61,781 levels, while support comes in around $43,300 levels respectively. If a lower high is already in place at $60,000 levels, the next short term projected target could be towards $43,000 levels, going forward.

As discussed yesterday, the overall uptrend continues to remain intact for now and Bitcoin should be well supported around $37,700 levels, which is fibonacci 0.382 retracement of entire rally between $3,850 and $61,780 mark. Only a sustained drop below $24,000/25,000 and subsequently below the trend line support will be encouraging for bears to continue further.