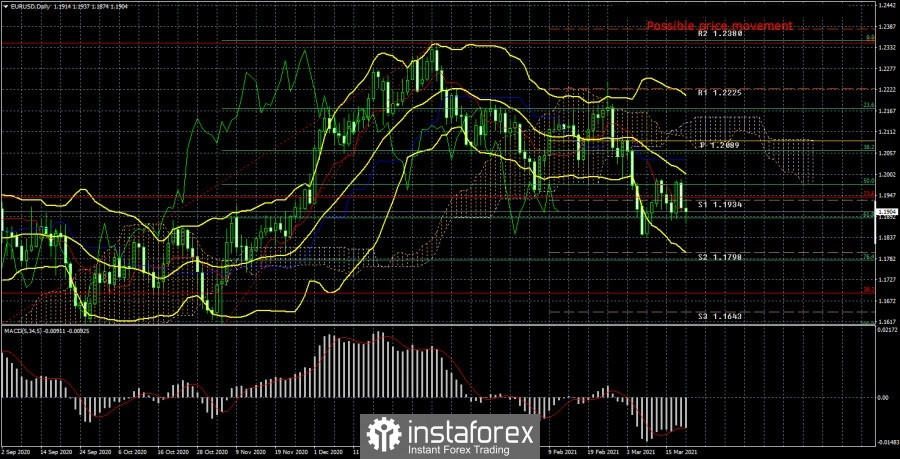 A week ago, we said that now the currency market is in complete turmoil. And over the past week, it has only gotten worse. There are a lot of factors that can hypothetically affect the mood of traders and the movement of the euro/dollar pair. And it seems that the markets themselves do not know what to do now. It should be said right away that everything is fine in the long term: the pair continues to adjust either against the last two-month round of growth or against the entire upward trend that began a year ago. But when switching to lower timeframes, it becomes clear that there is no trend now. The fundamental background is still much more difficult now. From the yield on US treasuries to the new economic aid package from Joe Biden, any factor can influence the pair’s movement. We will try to analyze all these factors in this article and draw a conclusion.

Let’s start with a topic that began to torment traders and investors relatively recently. Growth in the yield of American treasuries. Recently, more and more experts have begun to conclude that the US currency is not strengthened by the growth of the yield of 10-year government bonds. From our point of view, this factor affects the overall movement of the pair by no more than 10%. A good example was last week when treasuries continued to grow and made up 1.716% of the yield on Friday, however, the euro/dollar pair is flat, that is, the dollar did not show stable growth. Thus, locally, within one day, traders can react to this indicator, however, it is unlikely that it is a fundamental background.

Next, the ECB and Fed meetings. With the meeting of the European Central Bank, everything is simple, because it did not provide any information to the markets at all. Christine Lagarde’s latest comments were about negative GDP forecasts for the first quarter of 2021. As for the Fed, whose decisions are guided by many other central banks in the world, it also took an exclusively wait-and-see attitude. Simply put, Jerome Powell has not commented on the growth of treasury yields. He is not going to tighten monetary policy in the next three years and is not going (at least in the near future) to wind down the quantitative easing program ($120 billion per month). The only thing that can be noted following the results of the last meeting of the Federal Reserve is that the forecasts for GDP and inflation for 2021 were raised. On the one hand, this is a positive factor. On the other hand, these are just forecasts. Recall that the same forecast for inflation has long been in the vision of the Fed is above 2%, but the inflation itself is below 2% for a couple of years. In general, we did not see anything overly optimistic in the statements of the Fed and the ECB. No changes.

“Coronavirus”. It can be noted that the European Union continues to beat anti-records in terms of vaccination rates, far behind other, no less developed and advanced countries. However, it should be noted that the factor of the third “wave” is also important, however, the markets do not react to it with powerful sales of the European currency. The panic caused by the “coronavirus” in March last year led first to a strong rise in the dollar, and then to an equally powerful fall. But then no one knew how the epidemic would turn out and how it would end. Now, more or less everything is known about the virus, and vaccination at least continues around the world. Thus, this factor also seems to us not too important at this time.

Macroeconomic statistics. The latest reports from overseas have pleased investors. The economy is recovering strongly, unemployment is falling, Nonfarm Payrolls are rising, and inflation is also showing signs of accelerating. Thus, it strongly contrasts with the statistics from Europe, where inflation is stuck around 1%, GDP will shrink both in the fourth quarter of 2020 and in the first quarter of 2021, and unemployment is higher than in the United States. Moreover, the States sacrifice indicators such as the national debt to bring their economy to life as quickly as possible. But the European Union is not ready to pour the same huge amount of money into the economy, so in any case, the American economy will recover much faster than the European one. And this is a fat plus in the piggy bank of the US currency since this can mean a flow of capital to America.

However, there are also fat cons for the dollar. More precisely, one fat minus. We are talking, of course, about Joe Biden’s “plan to save the economy”, and simply put, about two trillion dollars that will begin to flow into the economy in the near future. We have already written about this factor many times, and nothing new can be said here. According to economic laws, if the money supply is growing, but the number of goods and services produced is not – this provokes inflation. If there are more dollars, but the euro currency is not, this provokes a fall in the dollar. Thus, in the long term, we continue to expect a resumption of the upward trend. Unfortunately, this factor is contradicted, for example, by the COT reports, which show that in recent weeks, the major players have weakened their “bullish” mood. But this is a double-edged sword. The COT report on the euro does not take into account the increase in the money supply in the United States, so major players may reduce demand for the euro, but due to the growth of the money supply in the United States, the pair’s exchange rate may remain stable. 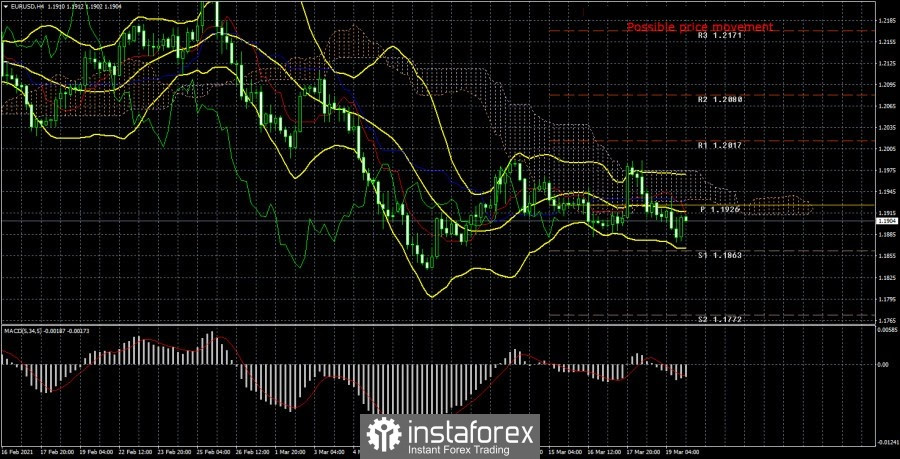 The technical picture of the EUR/USD pair on the 4-hour chart perfectly shows the flat in which the quotes are currently located. Maybe this is not the clearest flat, but the pair has spent the last few weeks without a pronounced trend movement. The key point on the Ichimoku system is the rebound from the upper line of the Ichimoku Senkou Span B cloud, which is a powerful resistance. Thus, the bears may try to continue the technical correction against the entire upward trend, which began a year ago. In this case, the previous local minimum, which is now located around 1.1836, should be overcome.