The AUD/USD pair is trading in the control of the US currency. It failed to consolidate at the reached peaks and returned to the area of the 0.77 mark again, following the impulsive growth of more than 100 points towards the middle of the level of 0.78 due to the release of strong Australian labor market data. Moreover, the AUD was unable to oppose the USD, which follows the 10-year Treasury yield. During the last Fed meeting, they did not scare investors by controlling the yield curve, instead they ignored the latest trends in the US debt market.

Meanwhile, the Reserve Bank of Australia is quite sensitive to the exceeding of target levels, increasing the pace and volume of bond purchases. This is also the reason why the AUD/USD pair cannot break through the resistance level of 0.7850. In fact, AUD buyers approached this target several times this month and even tested it, but they returned every time. Even strong data on the growth of the Australian labor market could not provide a reliable growth for its national currency, which decline to the range of 0.7710-0.7790 after the impulse growth. 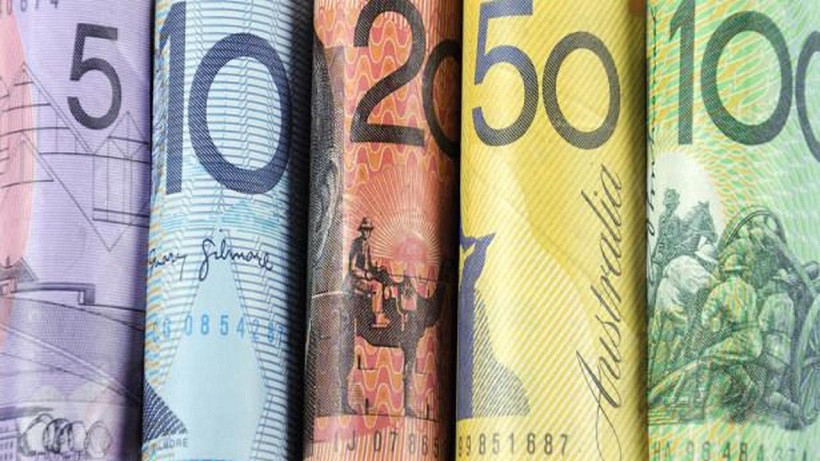 Nevertheless, the AUD/USD pair still have the potential to further rise. Even against the US dollar, the Australian one is resisting the attack of dollar bulls. In general, the situation in Australia is similar to that of the United States – the economy is recovering at a faster pace, but the central banks are not in a rush to take a “hawkish” position. Moreover, both the FRS and the RBA representatives assure investors that the soft conditions of monetary policy will continue for quite some time, that is, for the next two to three years, even despite positive economic trends. Such rhetoric of representatives of the Central Bank cools the bullish impulses, but overall, the currency market is strengthening the prospect that Central banks will eventually have to reckon with the “objective reality”. Such assumptions are confirmed by recent macroeconomic reports.

Going back to the Australian Nonfarm data, it is worth noting that almost all components appeared in the “green” zone, which exceeded the forecasted values.The February figures reflected the recovery in the Australian labor market, partly leveling the voiced concerns of RBA members during the last meeting.

As a result, the unemployment rate in the country sharply declined to 5.8%, although it should have remained at 6.4% based on preliminary forecasts. This indicator shows a downward trend for the four consecutive months, indicating “good condition” trends in the labor market. The last time unemployment was at this level or to be precise, slightly lower (5.2%), was in March 2020, that is, before Australia felt the first negative effects of the COVID-19 crisis. From that point on, this indicator has fluctuated in the range of 5.0%-5.4%. In other words, unemployment is close to pre-crisis levels, which is earlier than expected. In particular, the RBA members announced their forecast at the February meeting. According to which, this year’s unemployment rate is expected around 6%, while it will return to the pre-crisis range of 5% -5.5% only in 2022. However, it can be seen that the indicator is falling at a rapid pace compared to the initial forecasts, so it might return to the above range in the Q2 of this year. 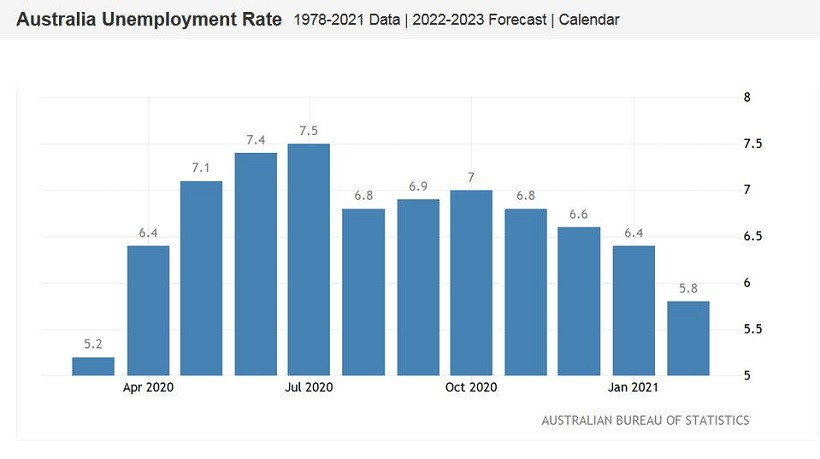 In addition, we should note the positive dynamics of the growth in the number of employed in February. The total values also turned out to be better than forecasted, coming out at around 88 thousand, against the forecasted growth of 38 thousand. However, the structure of this indicator suggests that overall growth was driven by full employment, whereas part-time employment showed a negative result (ratio +89/-0.5). At the same time, it is known that full-time positions usually offer a higher level of salary and a higher level of social security, compared to temporary part-time jobs. Therefore, the current dynamics in this case is extremely positive. Moreover, a similar pattern was observed in the past month and in December: the full-time component was almost twice as high as the part-time component.

Therefore, the Australian labor market has shown its “positive qualities” again, allowing AUD/USD buyers to depend on a more optimistic attitude from RBA members. Despite the attack of the US currency, the Australian dollar retains the potential to rise further, since it has its own individual reasons to strengthen. In this case, long positions with a medium-term target of 0.7780 (middle line of the Bollinger Bands on the daily chart) can be considered when approaching the support level of 0.7700 (upper border of the Kumo cloud on the daily chart). Lastly, the main target is set at the local price high of 0.7850, which serves as a key resistance level.