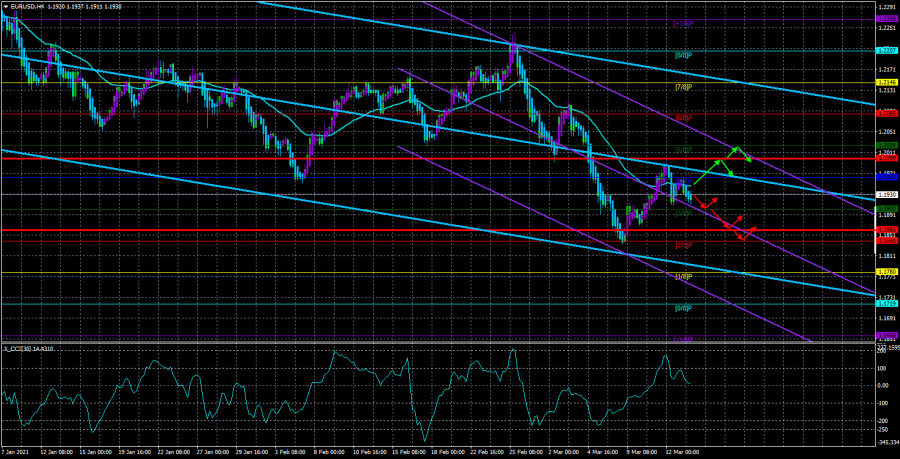 At the beginning of the new trading week, the EUR/USD currency pair tried to resume its downward movement, once again consolidating below the moving average line. Thus, the markets showed that they still tend to buy the US currency. Moreover, the euro currency has been correcting downwards for 2.5 months, and the pound sterling – for 2.5 weeks. Of course, the pound has a “speculative” factor, however, is it the only difference between the movements of the two major currency pairs? In our previous analytical reviews, we have already said that we allow a new round of downward correction in the global plan. We said that the pair have already adjusted by 50% from the last round of the upward trend, however, there is also the entire upward trend, which is 1700 points, and against this trend, the price has adjusted by 25% in the first months of 2021. This means that the pair still has a place to fall. We have also repeatedly drawn the attention of traders to the fact that a $ 2 trillion economic rescue plan may begin to be implemented in the United States as early as this week. This means that new hundreds of billions of dollars will be “dropped from the helicopter” to stimulate the economy. This means that dollars will become more banal, the money supply will grow, and the exchange rate of this currency may decrease due to changes in the balance between supply and demand in the market. That is why we believe that in general, the US currency will continue to devalue in 2021. But while this process has not begun, the dollar may still show growth for some time.

But let’s go back to the European Union, which in recent weeks has begun to help the US dollar grow by all means. The problems in Europe began a few weeks ago when it became clear that the vaccination plan developed by the European Commission was very weak or outright failed. The plan was that the European Commission makes its purchases of a vaccine against the “coronavirus”, which are subsequently distributed among all EU member states. However, first, there were problems with the supply of vaccines from leading manufacturers such as Pfizer and AstraZeneca, and then problems with distribution. It is obvious that the production capacity of pharmaceutical companies is limited and cannot provide the whole world with a vaccine within a few months. The European Union is home to 450 million people. Naturally, they are much more difficult to vaccinate than the 60 million people living in the UK. However, Brussels made orders for the supply of vaccines much later than the same London. At the same time, not all vaccines are approved for use in the European Union. All this has led to the fact that the rate of vaccination in the EU is very low, which leads to discontent and criticism from the members of the alliance. There is also the problem of disproportionate and unfair distribution of vaccines. Austria, Bulgaria, Latvia, Slovenia, the Czech Republic, and Croatia have written an open letter to the President of the European Council, Charles Michel, and the head of the European Commission, Ursula von der Leyen, saying that some countries, thanks to the unfair distribution of vaccines, can achieve collective immunity in a few weeks, and the rest – in the best case in a few months. The first Chancellor of Austria, Sebastian Kurz, noted that additional contracts for the supply of vaccines were not transparent, and some countries (Denmark or the Netherlands) receive much more vaccines relative to the population than, for example, Bulgaria or Croatia. Kurz believes that some countries, bypassing the current European legislation, have signed contracts with pharmaceutical companies for additional supplies of the vaccine. As a result, such countries now receive the vaccine both under their contracts and on distribution from the European Union.

Also, in some countries, “anti-European” sentiments are maturing precisely because of the inability of the European Union to provide everyone with vaccines. According to French analyst and journalist Laurent Herble, who published a corresponding article last Friday, France will be the next country that wants to live separately from the European Union. According to Herble, the European Union does not provide enough assistance to EU member states, and also points to the strongest drawdowns in industrial production and the economy of the bloc, which the European Commission cannot cope with. Herble cites the example of the United States, where more than $ 5 trillion was poured into the economy to revive it as soon as possible. In the European Union, according to the analyst, the financing amounted to about 300 billion euros Herble also accuses EU leaders of too slow negotiations with manufacturers, which leads many countries to turn to Russia or China for the purchase of vaccines. The journalist also cites the example of the United Kingdom, where the vaccination process is much faster, asking the question that maybe France outside the European Union could live much better? “The EU is just an additional bureaucratic structure that paralyzes and never serves our interests,” Herble said. Earlier, the first deputy head of the European Commission, Frans Timmermans, admitted that the EU’s strategy for generating orders contained errors. According to Timmermans, joint orders of vaccines – this was the right step, but which is more beneficial to rich countries. Earlier, Ursula von der Leyen also rejected all the accusations against the European Commission, saying that she does not understand why the European Commission is criticized if the problem is the disruption of plans and schedules for the supply of vaccines by pharmaceutical companies, which themselves have admitted this.

Most political analysts still do not believe that France will leave the EU, as this will be the second most serious loss of the alliance. Without France, the European Union is likely to simply collapse. Many experts believe that the issue of France’s exit from the EU will become more relevant if Marine Le Pen wins the next presidential election. The elections will be held next year. In the meantime, the euro currency may partly fall due to the formed “vaccination crisis” in the EU. 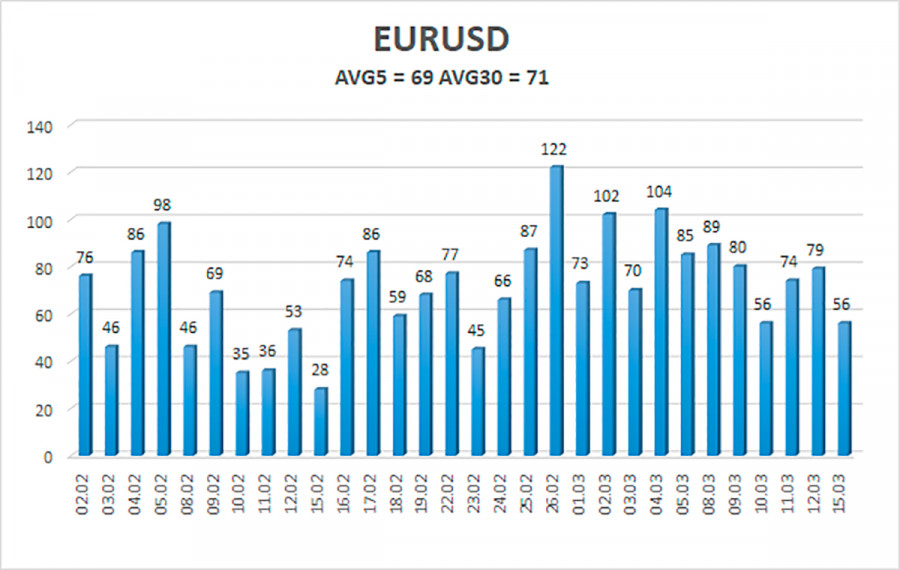 The volatility of the euro/dollar currency pair as of March 16 is 69 points and is characterized as “average”. Thus, we expect the pair to move today between the levels of 1.1861 and 1.1999. A reversal of the Heiken Ashi indicator to the top will signal a new round of upward movement.

The EUR/USD pair is now located just below the moving average, so there is a slightly better chance of resuming the downward movement. Thus, today it is recommended to stay in short positions with targets of 1.1902 and 1.1861 until the Heiken Ashi indicator turns up. It is recommended to consider buy orders if the pair is fixed above the moving average, with the first targets of 1.1999 and 1.2024.