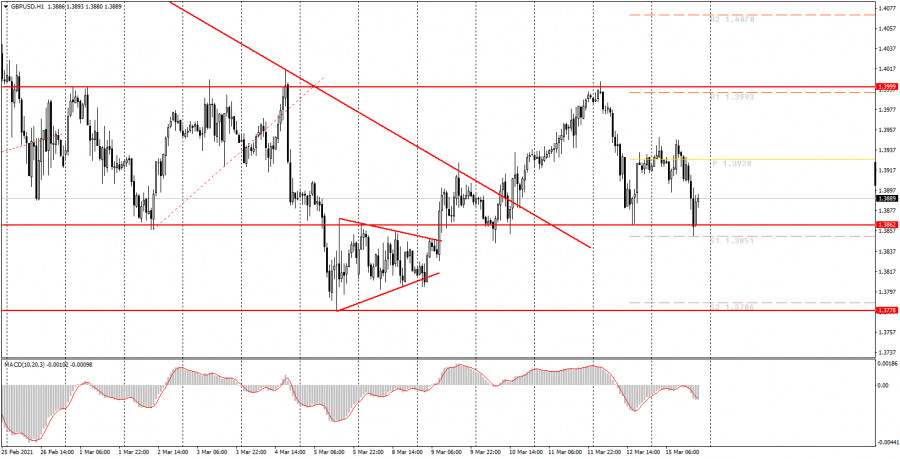 The GBP/USD pair began a new round of downward movement at the beginning of a new trading week and is about to close Monday near the 1.3862 level. This level is an extreme, that is, a level from which the price has repeatedly bounced off. As novice traders can see, it rebounded this time too. Thus, the upward movement can now follow. The trend, as such, is now absent. There is no trendline or trend channel, and in general, you can clearly see that the pair is in a kind of horizontal channel, trading mainly between the levels of 1.3862 and 1.3999. In this case, both long and short positions are relevant now. We previously advised novice traders to open long positions if the price rebounds from the 1.3858 level (today it was revised to 1.3862). This rebound happened, so traders had every right to open longs. The targets are located near 1.3928 or slightly higher. You should place Stop Loss for this deal, below the 1.3862 level. You are advised to sell the pair if it settles below the 1.3862 level, which did not happen over the past day. In general, the trading strategy remains unchanged at the moment. The extremum level of 1.3862 will be of key importance.

No major reports from the UK on Monday. Therefore, the pound’s fall was not associated with macroeconomics or foundation. Consequently, this was a common drop in quotes, which is often referred to as “market noise”. This movement was not provoked by anything in particular. This is just a reflection of the fact that bears were slightly more active than buyers on Monday. There does not have to be any reason for this.

The calendar of macroeconomic events in the UK will remain empty on Tuesday. Meanwhile, the US will only release one more or less significant report – industrial production. Thus, the influence of the fundamental background will, most likely, be minimal, if at all, tomorrow. Markets will quietly continue to prepare for the Bank of England meetings on Thursday and the Federal Reserve on Wednesday.

1) Long positions are now valid since the downward trend has been canceled. Novice traders already had the opportunity to open longs with a target around 1.3928 as the price bounced off 1.3862 (1.3858). So now you are advised to keep these positions open, not forgetting about Stop Loss. Tomorrow you can use the same level (1.3862) to open longs.

2) Short positions are currently irrelevant, since the downward trend line is no longer relevant, and the upward trend has not been canceled. Although in the case the price clearly settles below 1.3862, we would advise opening short positions with a target located 40-50 points below. In this case, we place Stop Loss above the 1.3862 level.