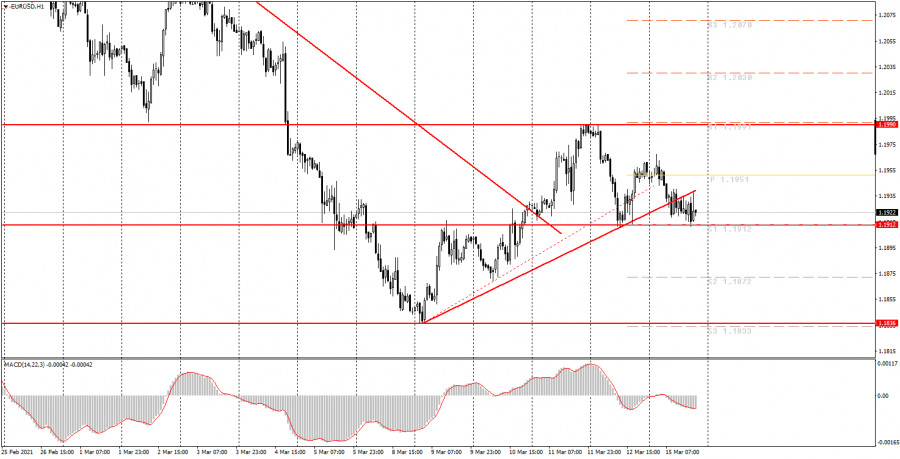 On Monday, the euro/dollar pair resumed its downward movement during night time. That is, the MACD indicator moved downwards at night. However, it was not recommended to open short positions since the ascending trendline was still in place at that time. In our previous review, we highlighted that the trendline has already changed its position. This means that the price may consolidate below this line once again. This is exactly what happened on Monday. The consolidation of the quotes below the trendline could be perceived as a sell signal. However, after the formation of this signal, the volatility dropped to almost zero. Since the signal was generated, the pair has passed the range of 20 pips between its low and high. In total, the pair passed the range of 56 pips during the day, while the biggest part of the distance was covered during the night time. Thus, we can say that the movement of the EUR/USD pair during day trading was very weak. The upward trend has been canceled at the moment, and a new downtrend has been formed. On the chart, we can also see three strong extremum levels from which the price has pulled back several times. At the moment, just one of these levels at 1.1912 has been tested. Therefore, it is not recommended to open new short positions until the price breaks through this level. Otherwise, a rebound can provoke a new round of an upward movement.

On Monday, there were no important macroeconomic reports either in the US or in the European Union. So, beginners could rely only on technical factors. The lack of important news and reports was the reason for weak volatility during the day. Surprisingly, market participants downplayed the change in 10-year Treasuries yields which have been in focus for the past two weeks. Despite the decline in US Treasury yields, the US dollar has advanced, although the correlation between the two assets is usually negative. Thus, the fundamental background did not influence the trajectory of the euro/dollar pair on Monday.

On March 16, the ZEW Indicator of Economic Sentiment will be published in the EU. This report is of minor importance to the markets. Meanwhile, the US will release the report on changes in industrial production. It is very likely that both of these reports will be ignored by investors. We expect a slight or zero reaction from the markets. The technical factors should be put first, and you should pay attention to the 1.1912 level.

2) Trading short would be a good idea at the moment. If the price consolidates below the level of 1.1912, you can consider opening short positions with the targets located at 30-40 pips below the entry point. When a clear signal is formed and a profit of 15-20 pips is accumulated, we recommend moving Stop Loss to breakeven point.