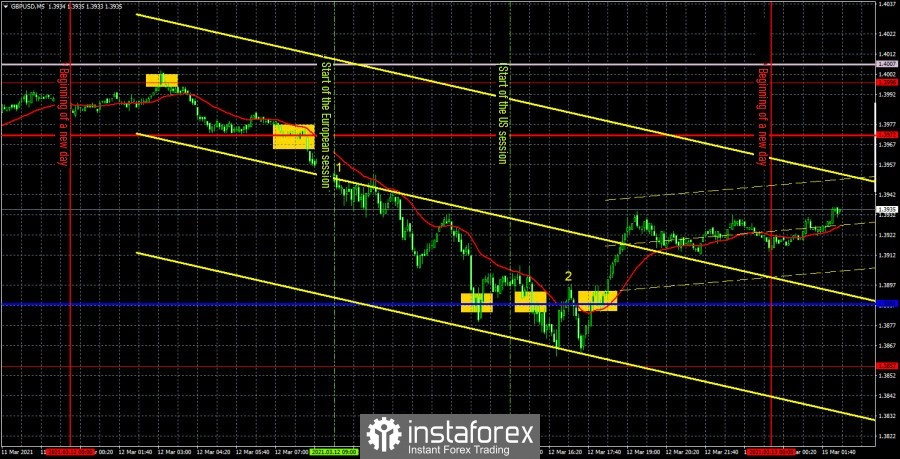 The GBP/USD pair was trading rather ambiguously on Friday, March 12. On the one hand, a sufficient number of signals were generated that could and should have been processed. On the other hand, several false signals were also generated, which were important to weed out. On the third hand, important reports were published, but they turned out to be contradictory and were ultimately ignored. But first things first. During the evening, the first signal was formed – to sell – in the form of a rebound from the 1.3998 level, from which the pair is very fond of rebounding recently. Quotes of the pound/dollar pair immediately dropped to the first target level of 1.3972, which could bring around 20 points of profits. However, this signal was generated at night, so it could be missed. The second sell signal (also marked with a rectangle) was formed a couple of hours before the opening of the European trading session – surpassing the support level of 1.3972. This signal also turned out to be strong and correct, afterwards the price fell by around 70 points, since the nearest target was the Kijun-sen line, which was reached. Thus, traders could also make around 70 points of profit on this signal. Furthermore, the first rebound from the critical line followed, and then its breakthrough, each of these signals could also be worked out, but both turned out to be false. On the first one it was possible to get a loss of about 20 points, on the second – without a loss, since the price went down 20 points, so the Stop Loss had to be set at breakeven. Furthermore, the price crossed the critical line several times, but all these signals after two false ones were no longer worth considering, since it became clear that the logical movements were over. Subsequently, buyers still tried to return to 1.3972, but stopped somewhere halfway, as the trading ended. As a result, traders following our recommendations could earn 50 points on Friday. 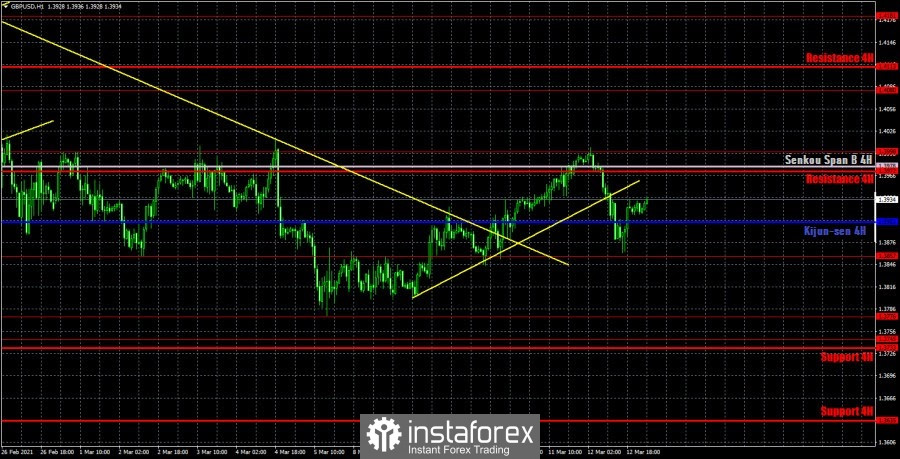 The pair fell below the upward trend line on the hourly timeframe on Friday, as well as the trend line, and before that it failed to overcome the extremum level of 1.3998. Thus, there is neither an upward trend nor a downward trend right now. The situation is confusing and looks more like a flat. However, the pound has long ceased to amaze with its movements that are not entirely logical. One has to remember that the pound has been growing in general for 5-6 months now, but it is very difficult to find reasons for this. No major events scheduled for Monday in Britain and the United States, but meetings of the Bank of England and the Federal Reserve are scheduled for this week. So there should be some important and interesting information for the pound/dollar pair this week. Trading might be calm on Monday, and traders can only pay attention to the 10-year Treasury yield in the United States. If this indicator continues to grow, then the dollar may receive market support. In general, we continue to recommend important levels and lines, when rebounding from them, surpassing them. As before, you should set the Stop Loss level when the price passes in the right direction by 15-20 points. The nearest level/line is always used as targets. 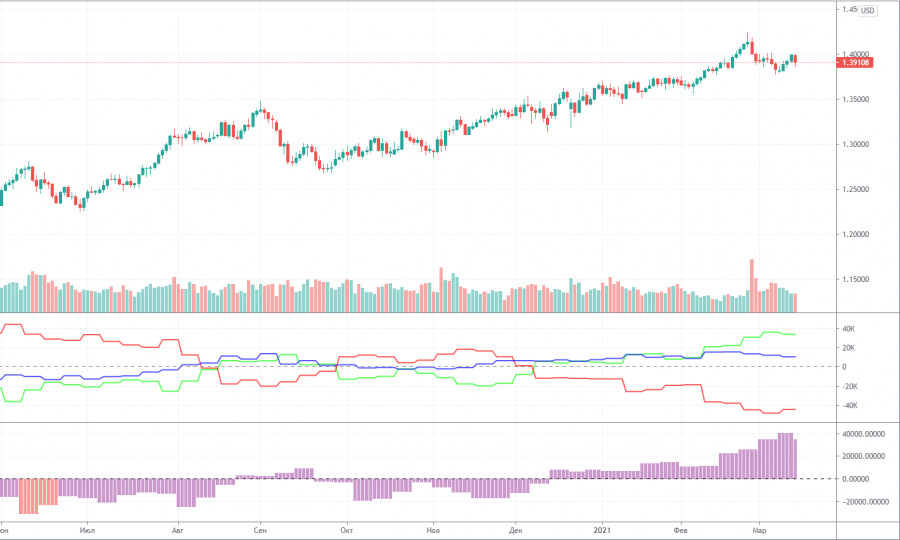 The GBP/USD pair fell by 100 points during the last reporting week (March 2-8). Despite the fact that the pound has been falling in the past two weeks, hardly anyone can now conclude that the upward trend is over. In principle, everything is clearly visible in the chart above. Moreover, just in the last 5-6 weeks, professional traders have been actively buying the pound. This is evidenced by the green line of the first indicator, which reflects the change in the net position of the group of non-commercial traders. At the same time, the Commercial group is increasing sales contracts. And this behavior of the two main groups of traders is the main sign of a strong trend. Thus, we see the strongest uncorrelation of the two main pairs. If the euro has been correcting for two and a half months, the pound has not. If the COT reports on the euro indicate a weakening of the bullish sentiment, then the COT reports on the pound – they say the opposite. Thus, the main thing now is not to try to assume that the pound and the euro will move in the same way, as is often the case. Unfortunately, there are no unambiguous factors as to why the euro and the pound are moving differently now. After all, if they do not correlate, this means that there are now global factors that have a strong impact on one or another currency in the eurozone or the UK. One negative is now coming from the UK, but the pound is growing much stronger than the euro. Could there be a problem in the eurozone? But we don’t really receive much disappointing news from over there. Well, is it worth saying that the euro and the pound did not react in the same way to the growth factor in the yield of US Treasuries? Thus, in general, we believe that the COT reports for the pound unambiguously speak in favor of continuing the upward movement.