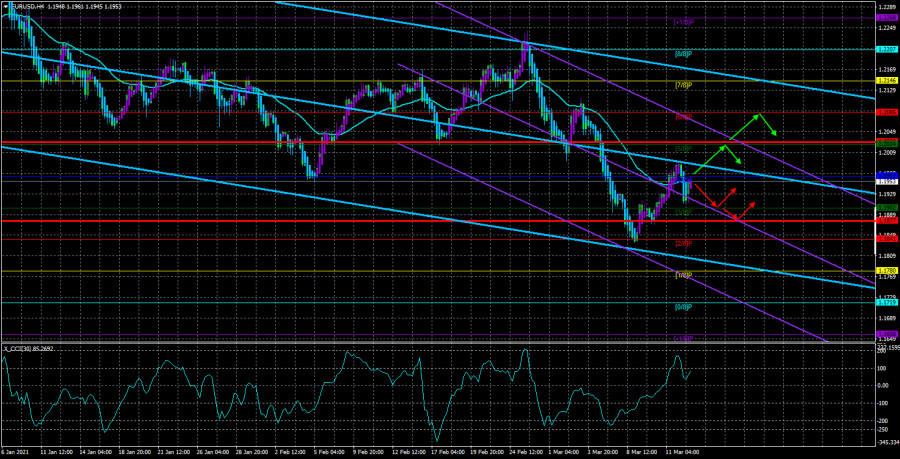 The EUR/USD currency pair at the end of the last trading week was trading rather erratically, if we talk about the “linear regression channels” system. The price first settled above the moving average, then below the moving average, and ended trading on Friday at the level exactly corresponding to the moving average. Thus, it is now impossible to conclude unequivocally that the trend has changed to an upward one. We need to wait for a clearer overcoming of the moving average line. In earlier fundamental articles, we have repeatedly said that in the long term, we expect the upward trend to continue, and we consider the new $ 2 trillion stimulus package from Joe Biden as the main factor. We believe that this will further inflate the money supply in the US, which will lead to a new fall in the US currency. However, in the shorter term, the downward trend (correction in global terms) may continue for some time, as it is not yet known exactly when a new batch of dollars will flow into the US economy. Therefore, our forecasts are based on these factors. Other factors, from our point of view, are now playing a smaller role, although the markets have reacted very strongly in recent weeks to the indicator of government bond yields in the United States. If the yield growth continues next week, this may support the US currency.

Among other important fundamental factors, we can single out the ECB meeting last week. As already known, the key parameters of monetary policy remained unchanged, however, it was announced that the pace of asset repurchase by the regulator from the open market was accelerated. At the moment, every week, the ECB buys government and commercial securities worth 17 billion euros under the QE program and 12 billion euros under the PEPP program. Thus, the second number will be increased in the near future, which indicates that the EU economy is not sufficiently stimulated. So, first, it’s a bearish factor for the euro, and second, it’s not surprising given the difficult winter for Europe and the current vaccination problems. Moreover, the European Union is already announcing the third wave of the “coronavirus”, which does not add optimism to traders and investors. But back to the ECB. The regulator expects that in 2021, GDP growth will be 4%, and in 2022 and 2023 – 4.1%. The forecasts for inflation are as follows: 1.5% in 2021, 1.2% in 2022, and 1.4% in 2023. In general, many experts believe that the European Union is not coping well with the settlement of the economic crisis caused by the pandemic.

Meanwhile, one of the most key topics in the foreign exchange market at this time may indeed continue to have a strong impact on the mood of traders. The fact is that more experts and investors are inclined to believe that the days of treasury bonds are over and fewer investors will deal with them in the future. The current levels of yield on treasuries are so minimal (despite the growth of this indicator in recent weeks) that the demand for these securities is only decreasing, and investors are not interested in buying them at all. Indeed, who is interested in a security that at best will bring 1% profit (adjusted for inflation)? Previously, the classic ratio of securities in the portfolios of investors was considered 60/40. 60% of shares and 40% of bonds. At the same time, the bonds were used to diversify risks but also brought a small profit. More investors are turning away from government bonds, as their yields are constantly falling. For example, the yield on 10-year treasuries in the United States fell from 16% in 1982 to 0.5% in 2020. On average, the bonds of many developed countries in the last 30-40 years could receive 5-8% of the annual income. However, these figures are now often lower than the inflation figures that central banks are actively cracking down on. Accordingly, the demand for bonds is constantly falling. It follows that the yield may continue to grow in the near future, but in the long term, it is unlikely that the interest rate will return to 5-8%.

At the same time, a new epidemiological crisis is brewing in Europe. As we said above, the EU’s “ideal plan” has failed in practice. First, the supply failures were reported by Prizer, then by AstraZeneca. Both companies are currently unable to fully fulfill their contracts with the EU and are delaying deliveries. According to the latest estimates, only 11 million out of 447 million people in the European Union have been fully vaccinated. 33 million people received at least one dose of the vaccine. These vaccination rates are significantly lower than in the UK, Israel, or the US. Also, since the beginning of February, many EU countries have again seen an increase in the number of “coronavirus” diseases. The third “wave” of the epidemic has already been announced by the authorities of Germany, Sweden, Finland, Estonia, Italy, Slovakia, and France. In some EU countries, strict quarantine has already been resumed, and in some, it is planned to be introduced in the near future. An even bigger problem is that many Europeans simply do not want to get vaccinated against COVID. Experts believe that the population’s confidence in the government has declined significantly over the past year. Many believe that the fight against the “coronavirus” has failed, and medicine does not receive enough funding to create truly safe and effective vaccines. By the way, in some countries, the vaccination of the population with AstraZeneca was suspended, after several patients died of blood clots after receiving the vaccination. Thus, there are not enough vaccines in the European Union even for themselves, moreover, vaccines raise certain questions about their effectiveness. The EU has already banned the export of vaccines outside the bloc and is looking to import vaccines. Due to the shortage, EU countries massively approve vaccines from other manufacturers that have not been certified by the EU itself. So some countries have already approved the use of Chinese and Russian vaccines among their populations, although initially there was no confidence in them. But when you don’t have your vaccines, anything that you can get will do. In general, Europe is on the verge of a full-scale crisis, and the EU authorities are mercilessly criticized by the governments of the member states of the Alliance. 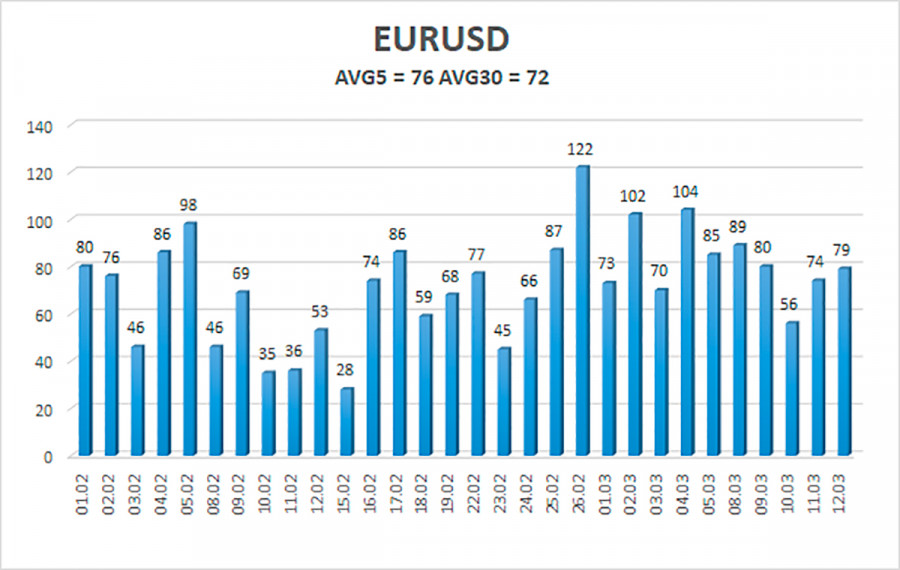 The volatility of the euro/dollar currency pair as of March 15 is 76 points and is characterized as “average”. Thus, we expect the pair to move today between the levels of 1.1877 and 1.2029. The reversal of the Heiken Ashi indicator downwards signals a possible resumption of the downward movement.