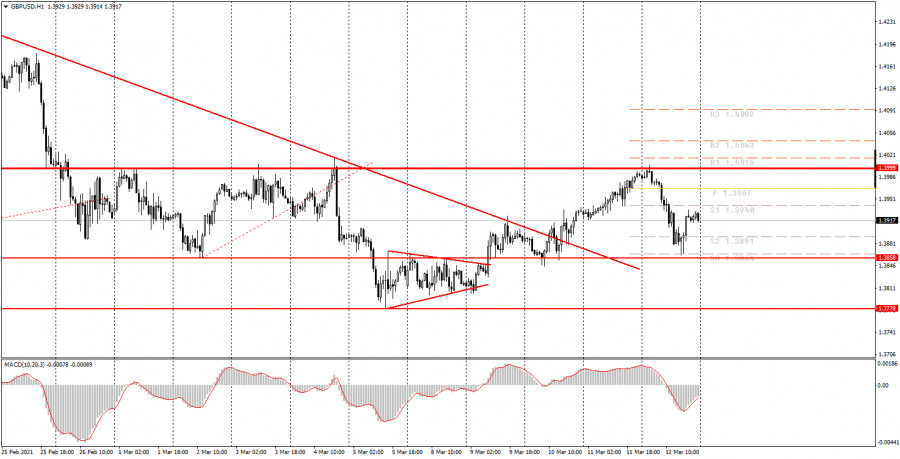 At the end of this week, the GBP/USD pair crossed the downward trend line and this could be regarded as a buy signal. Of course, the targets for the upward movement were well below the 1.3999 level, from which the price rebounded three times earlier, but look at how this level was reached! In any case, novice traders could earn a few dozen points on this signal. Last Friday, the pair perfectly reached and rebounded off the 1.3999 level, which provoked a fall by 140 points. From our point of view, this drop was purely technical, in no way caused by an increase in the yield of US government bonds, as many think. The rebound from the 40th level was perfect and it could even be worked out, although this signal was against the trend, since an upward trend was formed after surpassing the trend line. However, there are exceptions to any rule. Either way, important levels, which are marked with horizontal red lines, often lead to important rebounds or breakouts. These signals can also be viewed. What do we have at the moment? The trend formally remains rising, however, in fact, the movement of the last two weeks looks more like a flat. A buy signal was also formed (an upward reversal of the MACD indicator) last Friday, however, we did not recommend opening any positions at the end of the trading week. Long positions are more preferable on Monday, and we even have a sell signal at the moment. But it would be better to wait at least until morning and analyze the state of affairs again.

Important reports on GDP and industrial production were released in the UK on Friday. On the whole, these reports could be interpreted in different ways, since the GDP indicator for January turned out to be negative, but at the same time better than forecasted, while the industrial production indicator was negative and at the same time worse than forecasted. In any case, the pound started to fall at night and did so until the US session. Therefore, the UK reports that were released in the morning had no effect on the pair’s movement.

The UK and US macroeconomic calendars are completely empty on Monday. So it looks like the only thing traders might be looking at is the US 10-year Treasury yield. Technical factors will come first in regards to significance: important levels.

1) Long positions are now valid since the downward trend has been canceled. However, in order to open long positions, either a clear rebound from the 1.3858 level, or being able to surpass the 1.3999 level, or a new buy signal from MACD is required. Theoretically, the upward movement can continue as soon as trades are opened, but there is often a flat at night, so we recommend waiting until the morning before making decisions.

2) Short positions are irrelevant at this time, since the trend line is no longer relevant, and the upward trend has not been canceled. Although in case the price clearly settles below 1.3858, then we would recommend opening short positions with a target located 40-50 points below. However, trading on Monday can be extremely sluggish, which should be considered.