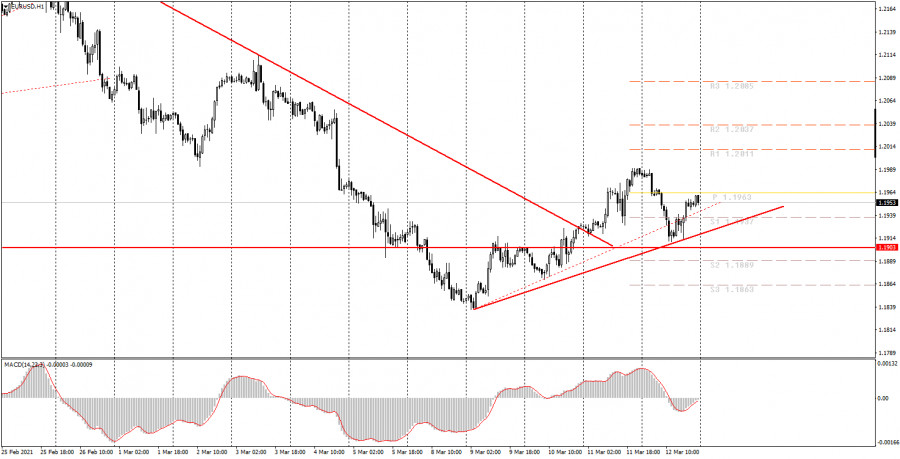 On March 12, EUR/USD reversed to the downside during night time and was extending its fall throughout the day. For some time, the downward movement seemed quite natural, while the uptrend remained in place due to the existing trendline. The bearish trend was so strong that the price consolidated below the trendline instead of testing it, and, therefore, a sell signal was formed. However, this was a false sell signal or, in other words, a weak one. In our articles, we always mention that if the price has already passed a long distance by the moment the signal is formed, then the remaining momentum can be extremely weak. Therefore, we do not recommend opening new positions in these cases. This is what happened on Friday. Immediately after the price had broken through the trendline, the downward movement stopped and was followed by an upward pullback. A little later, a new ascending trendline could have been formed at a new local low, but it would be of no use to novice traders. Moreover, it is not a good idea to open new positions at the end of the trading session on Friday. Thus, on March 12, beginners could stay out of the market for the whole day.

All the economic reports issued on Friday were of minor importance. The EU released the report on industrial production, while in the US, the data on Consumer Sentiment Index from the University of Michigan was published. Industrial production in the EU turned out to be much better than expected. However, this data did not support the euro in any way. The same is true for the Consumer Sentiment Index which exceeded market’s expectations but did not help the US dollar to rise. Once again, the macroeconomic statistics were downplayed by market participants. At the same time, investors reacted to the growing yields of the US government bonds. We are very skeptical about this factor, but many experts believe that it has been driving the US currency in recent weeks.

On Monday, March 15, no important events and publications are expected. Therefore, neither the fundamental background nor the macroeconomic data will influence the market on Monday. Still, beginners need to keep in mind the factor of growing US Treasury yields. Analysts believe that if 10-year Treasury yields continue to rise, the US dollar may again strengthen. So, it is better to monitor this trend on Monday.

1) Long positions remain relevant, but the new ascending trendline is weaker than the previous one. Thus, tomorrow novice traders should watch for new buy signals. The signals can be formed when the price rebounds from a new ascending trendline, or when the MACD indicator turns up after reaching a zero level. The targets can be set at the resistance area of 1.1970-1.1980.

2) Trading downwards is not relevant at the moment. However, if the pair settles below the new ascending trendline, you can consider opening short positions with the targets located 30-40 pips below the entry point. When a clear signal is formed and a profit of 15-20 pips is accumulated, we recommend setting Stop Loss at the breakeven point.