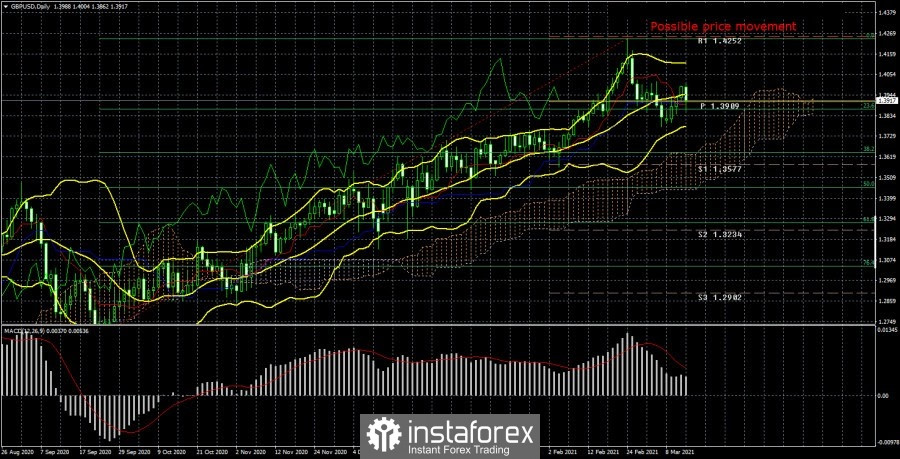 The British pound continues to impress with its unwillingness to adjust. The currency, which had been falling for most of the four years leading up to the pandemic, has now been rising for almost a year without stopping. Even in recent times, when the US currency has been growing both for technical reasons and based on some fundamental factors, the pound has not fallen in price in the long term. Even if we take into account not the entire upward trend, but only its last round, the pound/dollar pair managed to adjust by an “unrealistic” 23.6%. That is, by and large, this is not even a correction, but a banal pullback, which speaks in favor of maintaining a bullish mood among traders. Moreover, the pair has surged up during this week, which means that this pullback may already be completed. The pair’s quotes returned to the area above the critical line. Thus, if everything is quite ambiguous for the euro currency, then the pound – even more so. The same factor of pouring huge amounts of money into the American economy can again cause a serious fall in the dollar. Then the pound will rise in price even more and will reach the levels of “until 2016”. It turns out that for the British currency, in this case, Brexit will pass as if without consequences. This is the reality. Market participants continue to stubbornly ignore the fundamental background from the UK and this is a very remarkable moment for both major currency pairs. If the fundamental background is ignored, then traders are focused on something else at the moment. And this “something else” could be Joe Biden’s “economic rescue plan” or a new $ 2 trillion that will be poured into the US economy. After all, we have previously conducted a corresponding analysis and concluded that the global fall in the dollar over the past year was caused by strong growth in the money supply in the US, much higher than in the EU or the UK. Thus, we believe that the upward movement will resume for the two main pairs in the near future.

However, do not forget about the macroeconomic background, especially since this week there will be events that are worth paying attention to. Of course, the meeting of the Federal Reserve and the summing up of its results, scheduled for Wednesday, March 17, stands out from this list. From our point of view, all the key parameters of monetary policy will remain unchanged, however, the head of the regulator Jerome Powell can share with the markets information about the upcoming changes in monetary policy, in particular in the program of asset repurchase from the open market. Markets will also look forward to Powell’s views on rising treasury yields and future US inflation, as well as ways to contain it. All in all, Powell’s comments this time around could be really important and therefore trigger a market reaction. Also in the US on Tuesday, reports on retail sales and industrial production will be published. We believe that this data will be followed by a very weak reaction of traders, which can only be seen on the intraday. It will not affect the overall trend and the mood of traders.

Well, in addition to the Fed meeting, there will also be a meeting of the Bank of England, for which a huge number of questions have also accumulated. First, the Bank of England has been beating around the bush on the issue of introducing negative rates for more than six months. All this time, the members of the monetary committee are sending unequivocal signals that the bank can take such a step, but at the same time, despite all the economic problems in the country, negative rates can not be introduced in any way. Thus, traders will again wait for comments from BA representatives on this issue. Secondly, the yield of British treasury bonds is also growing and also makes the representatives of the regulator nervous. Accordingly, the markets will wait for a comment on this issue.

In general, the key events of the week will be the meetings of the two banks. However, do not forget that in the case of the pound sterling, the “speculative” factor also plays an important role. Simply put, the British currency has enjoyed disproportionately high demand in the last 5-6 months, which cannot be explained even by the strong growth of the money supply in the United States. Thus, this is an additional factor that plays in favor of the British pound, which has recently been very similar to bitcoin. The same strong growth, the same minimal corrections. Thus, the new week will depend a lot on the results of the central bank meetings, but in general, the markets will again gravitate to buying the British currency. We remind you that any fundamental hypothesis requires technical confirmation, and you should not make trading decisions without it. 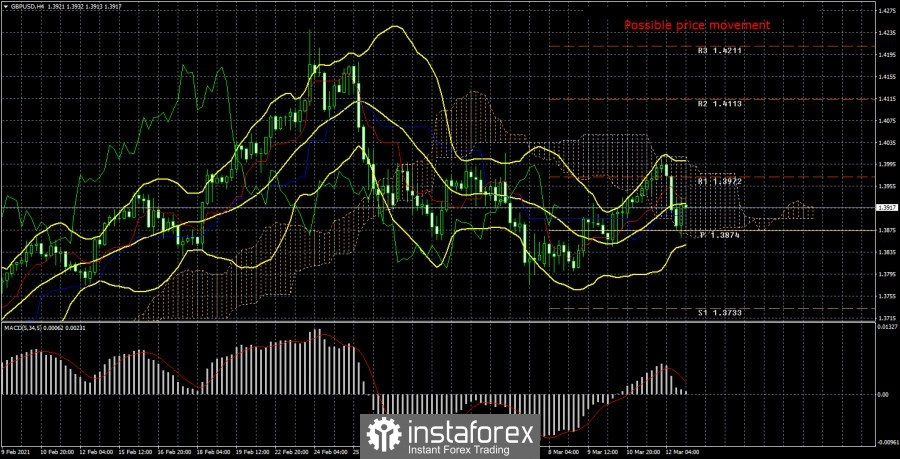 The pound/dollar pair on the 4-hour timeframe reached the upper line of the Ichimoku cloud, but could not overcome it on the first attempt and fell to the Kijun-sen line. Thus, on both higher time frames, the price is now located slightly above the critical line. Consequently, the upward prospects remain ahead of the pound/dollar pair. If the two central banks “help” the bulls this week, the upward movement will resume and the pair will once again seek to update its 2.5-year highs. In the 4-hour timeframe, it first needs to gain a foothold above the Ichimoku cloud. Fixing the price below the critical line on any timeframe for some time will cancel the scenario with a new round of upward movement.