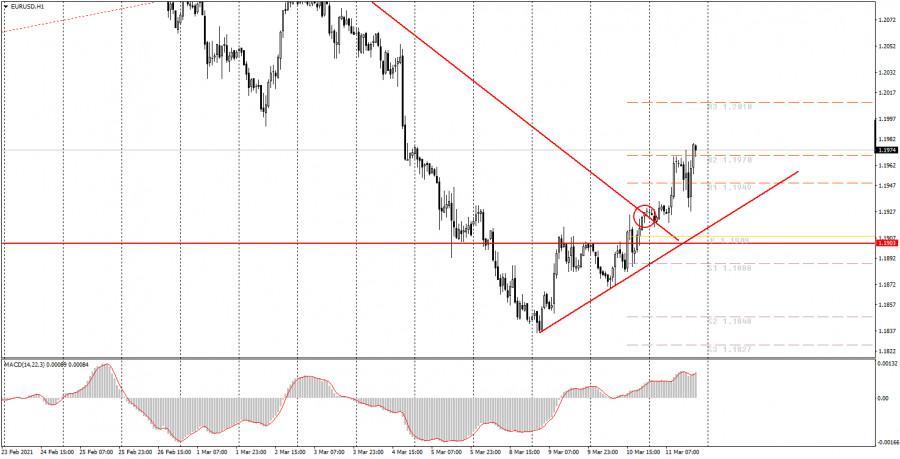 The EUR/USD pair continued the upward movement on March 11, which began a few days ago and was initially interpreted as a correction. All this time, the descending trend line retained its relevance and the bulls only managed to overcome it this evening, thus forming a buy signal. As we warned in the previous article, the signal was formed at night, so you were advised to either set Stop Loss or accompany an open deal. In practice, everything turned out very well, since the signal turned out to be quite strong, and the target level of 1.1964 was reached even before the announcement of the results of the ECB meeting and the press conference, thus bringing around 36 points of profit to novice traders. Considering the fact that today’s volatility was only 63 points (the distance from the day’s low to the day’s high), 36 points of profit is an excellent result. During the day, the pair made a downward reversal and fell, provoked by the announcement of the results of the ECB meeting, but at that time the newcomers had to leave the market. As a result, we have a new upward trend, so now you are advised to consider buy signals.

The most important event of the day, as we have already mentioned, was the ECB meeting, or rather its results. Although the results were quite few. The ECB quite predictably left key rates unchanged, as well as the PEPP program (emergency program to counter the pandemic) worth 1.85 trillion euros. The only thing that changed is the central bank’s desire to make asset purchases under this program at a higher rate than in the first months of this year. Thus, such a statement can be considered bearish, since the central bank considers the current monthly volumes of purchases (respectively, stimulating the economy) to be insufficiently high. The euro slightly fell after we all received this information, but very quickly returned to the upward trend.

The European Union is scheduled to publish only a secondary report on changes in industrial production in January. In fact, the indicator is quite important, but recently the markets rarely pay attention to it. Therefore, we do not expect traders to react to this report. The US will also publish a secondary indicator of consumer sentiment from the University of Michigan, which is also unlikely to cause a reaction. Thus, technical factors will be in first place tomorrow.

1) Long positions have become relevant at the moment, since an upward trend has formed. So now we advise you to watch for new buy signals, which may be a rebound from a new upward trend line or an upward reversal of the MACD indicator after a preliminary discharge to a zero level. Resistance levels 1.1970-1.1980 can be considered as targets.

2) Trading bearish has lost its relevance at this time. However, if the pair’s quotes settle below the new upward trend line, you can consider opening short positions with targets located 30-40 points below the entry point. When a clear signal is formed and profit worth 15-20 points has been accumulated, we recommend setting Stop Loss to breakeven.