The decision of the European Central Bank on monetary policy is not yet available, however, the buyers of the euro decided not to postpone everything for later and achieved a breakdown of the level of 1.1943. Let’s look at the 5-minute chart and talk about what happened. An unsuccessful resistance test of 1.1943 led to the formation of a false breakout and formed a signal to open short positions on the euro. However, there was no major downward movement, and after a while, the bulls still achieved a break above 1.1943. I could not enter the purchase at this level, as I was waiting for a reverse correction and a test of the area of 1.1943 from top to bottom (I marked the expected movement with blue lines). Now the focus is shifted to the second half of the day and the outcome of the European Central Bank meeting. 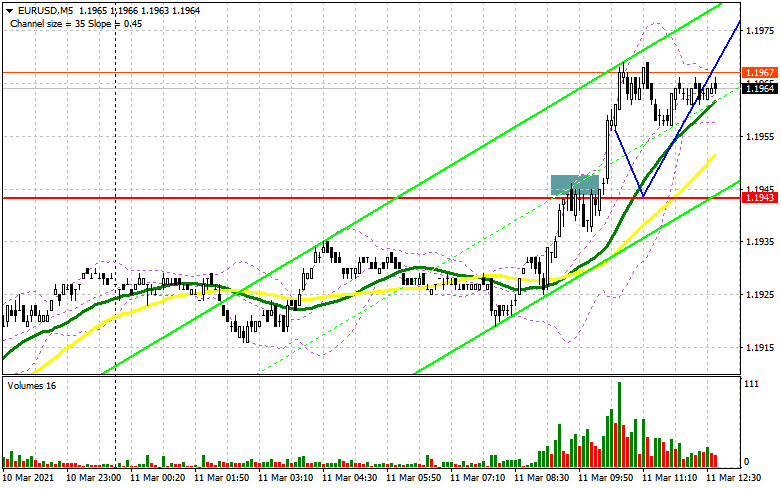 The ECB’s decision can quickly turn the market around: it is possible to open long positions in the event of a decline in the euro only if a false breakout is formed in the support area of 1.1943. The main target of buyers for the second half of the day will be a breakout of the resistance of 1.1998. The test of this level from top to bottom forms an additional entry point into long positions already in the expectation of updating the highs of 1.2047 and 1.2087. However, a move to these levels will occur only if the European Central Bank intervenes in its monetary policy at this meeting. If there is no bull activity in the area of 1.1943, I recommend waiting for the EUR/USD decline and opening long positions immediately for a rebound from the low of 1.1891 in the expectation of an upward correction of 25-30 points within the day. Above this level, the moving averages also pass, playing on the side of buyers.

A return to the level of 1.1943 forms a signal to open short positions. But before selling the euro below 1.1943, I recommend waiting for the test of this area from the bottom up. If there are no changes in the monetary policy of the European Central Bank, the pressure on the euro may return. In this case, you can count on updating the minimum of 1.1891, where I recommend fixing the profit. Further support is seen in the area of 1.1838. In case of further growth of the euro in the second half of the day, I recommend not to rush with sales: only the formation of a false breakout in the resistance area of 1.1998 will lead to the formation of the first signal to open short positions. If there is no activity at this level, I recommend postponing sales immediately for a rebound from the larger resistance of 1.2047, from where you can open short positions in the euro with the aim of a downward correction of 25-30 points within the day. 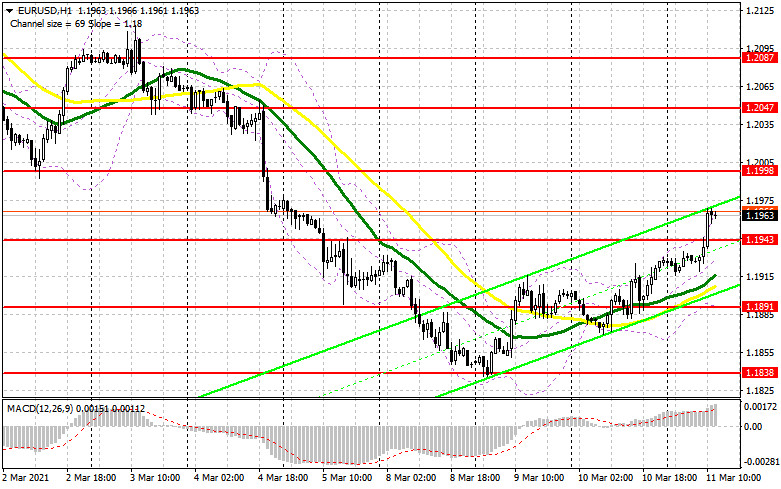 Let me remind you that the COT report (Commitment of Traders) for March 2 clearly shows how there is a sharp reduction in long positions and a very large increase in short ones, which indicates a clear shift in the market towards sellers of risky assets. This is confirmed by the chart of the fall of the euro, which we are seeing for the third week. This time, it was not possible to quickly win back another major decline of the pair down. The sharp rise in bond yields of many developed countries continues, which plays in favor of the US dollar, as investors expect that the United States will be the first to start raising interest rates, which makes the US dollar more attractive. The recent approval by the US Senate of a new aid package and a $ 1,400 payment to all Americans affected by the pandemic makes risky assets even less attractive.

Therefore, it is better not to rush to buy euros but to wait for lower prices. A good plus for the euro will be the moment when European countries begin to actively curtail quarantine and isolation measures: Germany has already announced its plan in this direction, but it has not yet come to the point. It is also necessary to wait for the moment when the service sector will start working again in full force, which will lead to an improvement in the economic prospects and also strengthen the EUR/USD pair. The COT report shows that long non-profit positions declined to the level of 222,655 from the level of 228,501, while short non-profit positions increased from the level of 90,136 to the level of 96,667. As a result, the total non-profit net position declined again for the third week in a row to 125,988 from 138,365. The weekly closing price was 1.2048 against 1.2164 a week earlier.

Trading is above 30 and 50-daily moving averages, which indicates that the euro will continue to grow in the short term.

In the case of a decline in the pair, the lower limit of the indicator in the area of 1.1891 will provide support.