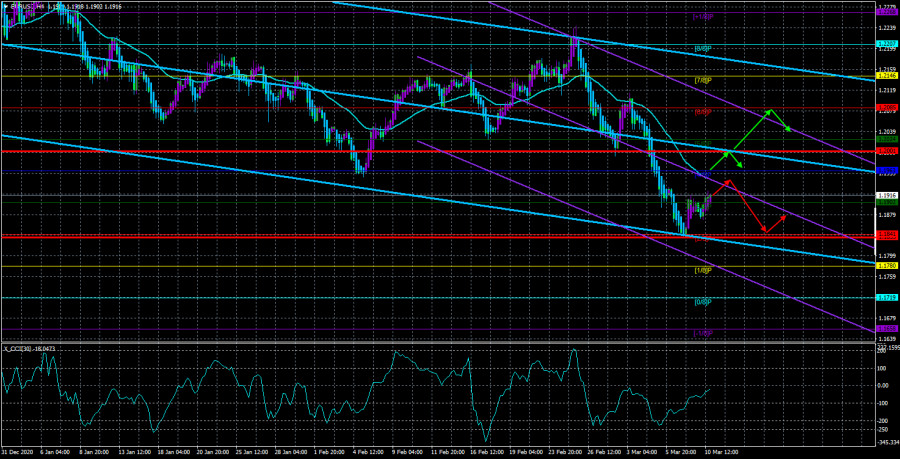 The EUR/USD currency pair continued to adjust during the third trading day of the week, as indicated by the purple bars of the Heiken Ashi indicator. The pair spent most of the day standing in one place. This suggests that market participants simply do not know what to do now: sell or buy? Although it would seem that the US dollar has been growing for two weeks, everyone in the market is sure – the reason is the growth in the yield of US government bonds, the yield of treasuries also continues to grow. So what’s the big deal? We continue to buy the US dollar, which in the last year has almost only become cheaper, however, it was in the last two weeks that I began to pay attention to the growing yield of 10-year treasuries. It’s not that simple really. In reality, the euro/dollar pair is now influenced by a huge number of factors. Starting with short-term technical, ending with global fundamental. In the current situation, no one can make a forecast for one or two months, because everything changes quite quickly. Two or three weeks ago, no one even thought about such indicators as the yield of treasuries. By the way, treasury bond yields are rising not only in the US but also in the EU and the UK. This is a normal phenomenon when governments pour hundreds of billions of dollars and euros into their economies to stimulate them, to stimulate inflation. If the yield on treasuries is lower than inflation, then the holders of securities receive losses. Strictly speaking, funds are not always invested in bonds to make a profit. At least because they often do not bring this profit by default. Interest rates of return usually do not exceed 1-2%, and inflation in recent years has been about the same in the EU and the US. Thus, if we talk about the real yield of treasuries, it is unlikely to exceed 0.5-0.6% per annum. By the way, the president of the Federal Reserve Bank of Minneapolis, Neil Kashkari, recently openly stated that he would be concerned if the indicator of real bond yields showed strong growth. It follows that investors buy more treasuries to keep the money in the most stable investment instrument, but with a minimum profit. To earn more, investors buy stocks and bitcoin. Thus, what is currently happening in the debt market should not have much impact on the foreign exchange market at all. Why, for example, did the US dollar not experience any market support, if the treasuries began to grow at the end of July and grew without stopping all this time? And if the euro/dollar pair was influenced by other factors at that time, why did they suddenly stop influencing it now? Moreover, in the coming weeks, the US economy will once again be pumped with money as part of Joe Biden’s new $ 1.9 trillion stimulus program. And we have previously done a detailed analysis that shows that the money supply in the United States over the past year has grown by at least 50% and in the European Union – by 15%. It turns out that in 2021, this imbalance will continue to worsen and, accordingly, the US currency will continue to fall. We recommend that this factor be used as a starting point for further analysis.

If our conclusion made above is correct, then what we have seen since the beginning of 2021 for the euro/dollar pair is a banal technical correction. Indeed, the pair has been correcting for only two months, and the previous trend took 10 months. It follows that the US currency may continue to adjust up to the 15th level, where approximately the 50.0% Fibonacci level of the entire upward trend is located. Of course, the correction may end much earlier, but in general, we want to say that in the long term, the pair’s downward movement is just a correction. And this is the second global factor that, from our point of view, should be taken into account.

All other factors – macroeconomic statistics, treasuries, the stock market, the rate of vaccination, the rate of economic recovery – are secondary factors at this time. We continue to conclude that “macroeconomics” is generally ignored in 90% of cases, which means that traders are not too interested in what the unemployment rate in the United States is and how quickly the European economy is recovering. Vaccination proceeds at the same rate. Treasuries and their profitability – this is generally a hype exclusively of the last two weeks, with which still no one can explain, and what is the relationship between the growth of the yield of treasuries and the strengthening of the dollar? Well, the pace of economic recovery is now much higher in the United States, which in general may support the corrective scenario, since it also implies a strengthening of the US currency.

So it turns out that analysts, traders, all as one, trumpet about the growth of the yield of treasuries, about the growth of public debt in the United States, and what’s next? The US government debt is constantly growing, but at the same time, the US stock market and the US dollar are constantly growing – by no means an outsider in the confrontation with the euro in recent decades. The yield of treasuries, if you look at the data from 1981, falls constantly. And even now, this indicator is almost at its minimum values, if you look at a long period. 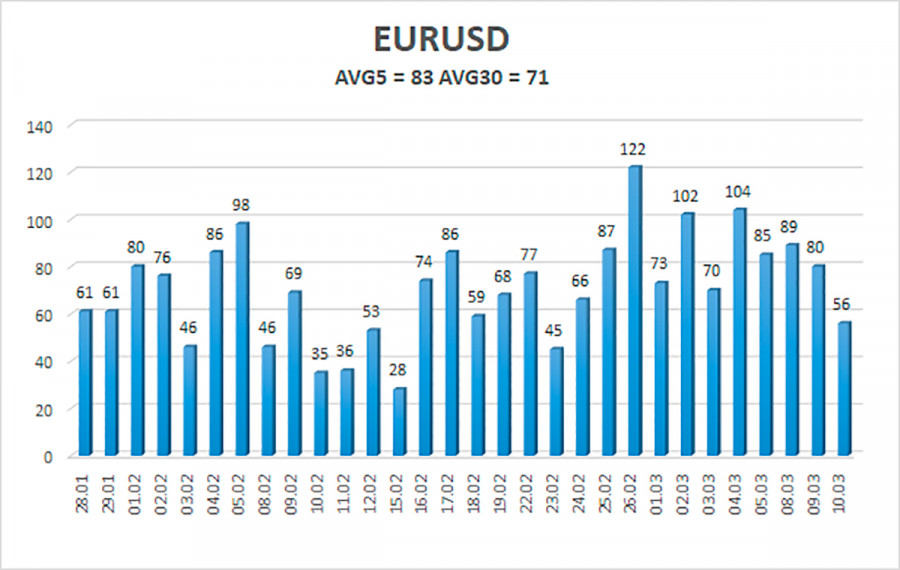 The volatility of the euro/dollar currency pair as of March 11 is 83 points and is characterized as “average”. Thus, we expect the pair to move today between the levels of 1.1835 and 1.2001. The reversal of the Heiken Ashi indicator downwards signals the resumption of the downward movement.

The EUR/USD pair continues to adjust within the downward trend. Thus, today it is recommended to open new short positions with targets of 1.1841 and 1.1780 after the Heiken Ashi indicator turns down or after a rebound from the moving average. It is recommended to consider buy orders if the pair is fixed above the moving average, with the first targets of 1.2001 and 1.2085.