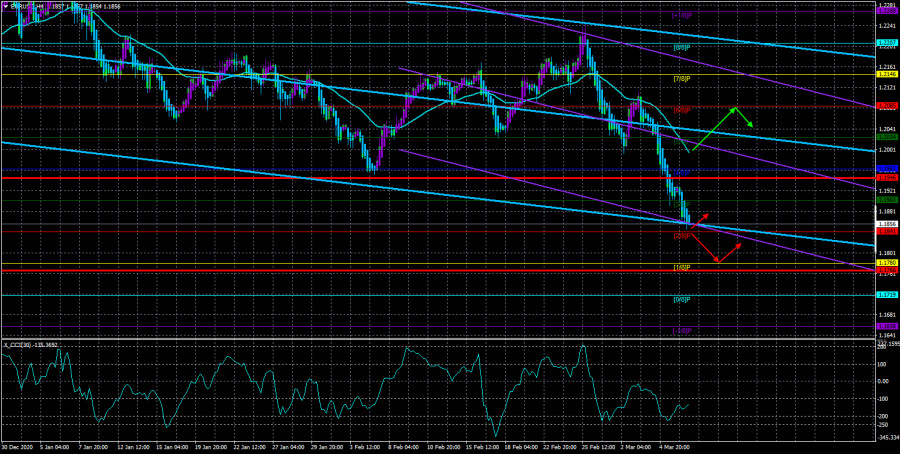 The EUR/USD currency pair continued to move downwards during the first trading day of the new week. Normal, calm, as if it had not passed 350 points to the south in the last seven trading days. However, the US currency has received unexpected support from the market in the last two weeks, and continues to “seize the moment”. We continue to believe that the rise in the US dollar is due to a whole group of factors, and not just the growth in the yield of 10-year Treasury bonds. One has only to look at the pound and immediately the question arises, why then the British currency does not fall? In general, of course, the pound has shown a decline in the last week and a half. But before that, the pound continued its strong upward trend and updated its 2.5-year highs almost every day. That is, the pound has been adjusted only for the last week and a half, in contrast to the euro, which has been falling for two months. Also, the pound sterling, for example, moved mainly sideways on Monday. It turns out that the growth in the yield of US government bonds is not the only factor that is currently taken into account by traders. From our point of view, the European currency is depreciating due to technical reasons (after all, we should not forget that the growth that preceded this fall lasted for almost 11 months and during this time the euro currency grew by 17 cents, although no special positive news came from Europe). Also, the US economy is recovering at a much faster pace than the European one, however, this is a double-edged sword at the moment. If the US economy were to grow at a higher rate during normal quiet times, this factor would give the dollar a huge advantage over the euro. However, now the US economy is recovering from a much larger decline in the second quarter of last year than the European one, and the trillions of dollars that were poured into the economy can turn into big problems for the States in the future. After all, by and large, the American population has been given money over the past year just to stimulate demand. Of course, in the context of each American, these amounts were not too large, but in total, at least 4 trillion dollars were introduced into the US economy, most of which was simply printed and a certain part of which was introduced into the economy on an irrevocable basis (“helicopter money”). So, to stimulate growth, you can just throw money out of the helicopter, but what to do when inflation creeps up? After all, those trillions of dollars will not disappear just like that. They cannot be simply withdrawn from the market. They will provoke an increase in inflation, which will have to be contained. And how can it be contained if the labor market has not yet recovered? The Fed, as usual, has only two options. Either curtail the quantitative easing program and programs to counter the pandemic, or raise the rate. There is no point in raising the rate until the labor market has reached pre-crisis levels. Thus, the reduction of the QE program may begin in the near future. But Jerome Powell dismissed these market expectations in his recent speeches. As well as the possibility of targeting the yield curve of government bonds. And earlier, Powell said that inflation will be allowed to go above the 2% level to compensate for periods of low inflation. Thus, the States are on the path of reflation. In any case, first, you need to wait for inflation to rise, and investors have big concerns about this. Yes, the US economy is now growing at a high rate, but its public debt, which needs to be serviced, is also growing at a high rate, as well as investors’ concerns about future inflation. After all, the increase in the yield of treasury bonds is not just a figure that reflects the annual income of the owners of securities. This is an indicator that reflects the demand for bonds at the moment. If the yield is rising, then the demand for bonds is falling. Accordingly, the US government does not attract additional funds (credit funds) that it would like to attract, accordingly, it is forced to raise the interest rate, respectively, in the future, it will be forced to pay more to holders of treasury bonds. Thus, the growth in the yield of American treasuries is a double-edged sword now. The rapid pace of recovery in the US economy is the same. That is why we believe that the strengthening of the US dollar will not be long-term.

Also, we should not forget that in the coming months, an additional $ 2 trillion will flow into the American economy, which the US Senate approved this weekend. Thus, the money supply in the United States will continue to increase, which will not affect the currency exchange rate of the US dollar. This factor, of course, can be offset by other factors. For example, the European Union will announce a new 4 trillion euro stimulus package tomorrow. Or the EU economy will continue to shrink instead of recovering in 2021, but so far we do not see any real factors that could offset this additional $ 2 trillion in the United States. Of course, a certain smoothing effect can have 750 billion euros from the recovery fund, which will be distributed in part in the form of grants between the EU countries. But it should be understood that this money, although it will be introduced into the economy, will be used to restore the most affected industries, and not dropped from a helicopter, as in the United States. And the amount is twice less than in the United States. Thus, we believe that the money supply indicators in the EU and the US will be among the most important in 2021. The US currency will continue to remain under pressure in 2021. The current strengthening of the dollar against the euro can be a banal technical correction against an 11-month upward trend or a crackdown before a new round of this very upward trend. This is our fundamental hypothesis for the coming months and 2021. As before, we recommend that you treat any fundamental conclusions with caution and be sure to wait for technical confirmation before working on them. We remind you that everything in the world can change very quickly and new factors may appear that will affect the euro and the dollar differently. No one could provoke a pandemic or a trade war between China and the United States. 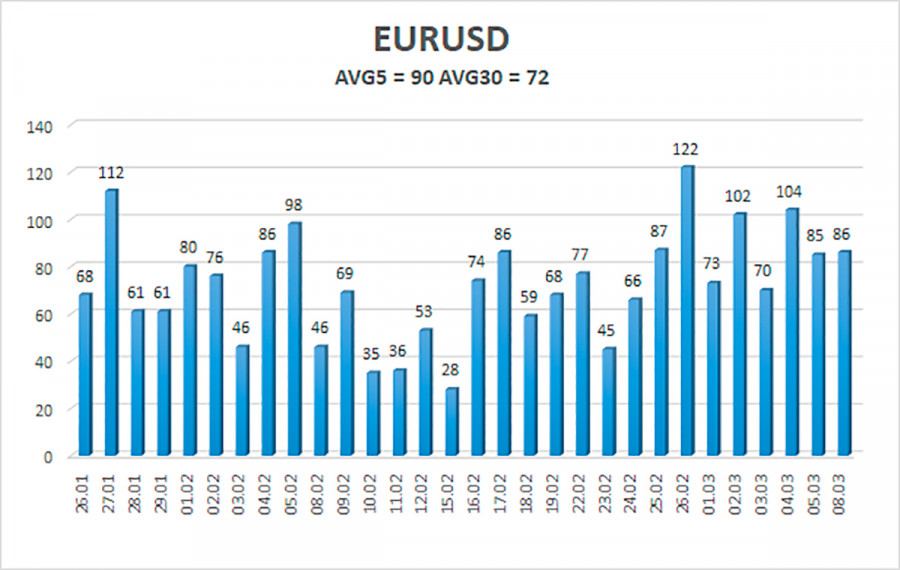 The volatility of the euro/dollar currency pair as of March 9 is 90 points and is characterized as “high”. Thus, we expect the pair to move today between the levels of 1.1766 and 1.1946. A reversal of the Heiken Ashi indicator to the top can signal a round of upward correction.

The EUR/USD pair continues to move down. Thus, today it is recommended to keep open short positions with targets of 1.1841 and 1.1780 until the Heiken Ashi indicator turns up. It is recommended to consider buy orders if the pair is fixed above the moving average, with the first target of 1.2085.