At the auction of the last five days, all major currencies, except for the Canadian dollar, declined against the US dollar. Thus, the main currency pair EUR/USD lost 1.28% in trading on March 1-5. In previous articles, I have repeatedly drawn attention to the fact that the US currency has recovered and the US dollar is strengthening across a wide range of the foreign exchange market, compensating for the losses incurred before. The essence of this remains unchanged — the US dollar went on the offensive and changed its recent downward trend to an upward trend.

The main trading event of the first spring week was certainly the data on the US labor market. Investors were waiting with interest for Friday’s reports from the Department of Employment to understand the pace of recovery of the world’s leading economy from restrictions and various types of blockages caused by the COVID-19 pandemic. I will admit honestly that Friday’s labor reports for February turned out to be very strong. Thus, the number of newly created jobs in the world’s leading economy increased by as much as 379 thousand, although the consensus forecast assumed an increase in new jobs by only 182 thousand. Although this figure seemed quite large, especially after the previous figure of 49,000, the actual value for February was really impressive. As for the unemployment rate, after a sharp drop in January from the previous 6.7% to 6.3%, it seemed good that this indicator remained at the same level. This is exactly what the experts expected. However, in February, unemployment in the United States continued to decline and reached the level of 6.2%. No matter what anyone says in their speeches (even the head of the Fed, Powell), it is necessary to base and draw conclusions based on actual indicators, and two of the most important of them — Nonfarm Payrolls and the unemployment rate, were so stylish that they left no doubt that the US economy is recovering faster than expected by the monetary men from the Fed and many market participants. As for the Fed’s colleagues from the European Central Bank (ECB), they are marking time, repeating the conditions for supporting and financing the eurozone economy under the PEPP program, that is, large-scale bond purchases in the context of the COVID-19 epidemic. This Thursday, March 10, the next meeting of the ECB will be held, following which the decision of the European Central Bank on interest rates will be announced, followed by a press conference of ECB President Christine Lagarde. With a high degree of probability, we will not hear or learn anything new. Most likely, rates will remain at their current values, and the ECB’s rhetoric will remain “dovish”, that is, extremely soft, where all the hardships for the European economy will be reduced to the ill-fated and continuing coronavirus epidemic. Well, it’s time to turn your attention to the price charts of the EUR/USD currency pair and let’s start with the results of the week that ended. 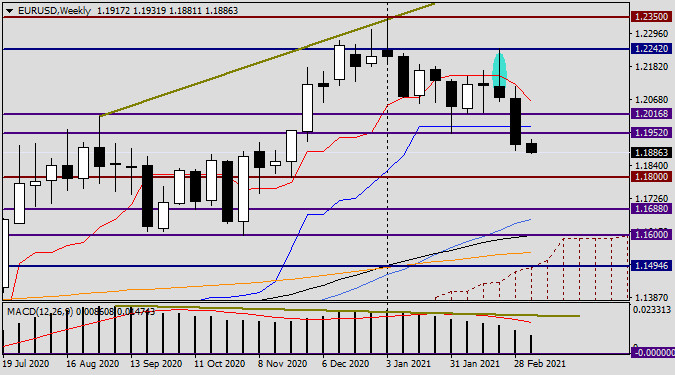 As already noted at the beginning of the article, the past week has confirmed the current superiority of the US dollar over the single European currency, and repeated assumptions and forecasts about the decline and sales of the main currency pair of the Forex market have fully justified themselves. The technical picture also fully reflects the downward scenario. As expected a week earlier, the circled reversal pattern of the “Shooting Star” candle analysis did not go unnoticed and began to be worked out by the bidders. As a result, the euro bears fulfilled their tasks, namely, they lowered the exchange rate below the important psychological level of 1.2000 and broke through fairly strong support at 1.1952. The closing of the last week’s trading with the formation of a large bearish candle at 1.1914 creates the prerequisites for a subsequent decline, the target of which is the area of 1.1830-1.1800. However, for this purpose, it will be necessary to pass one more far difficult level of 1.1900. Given the strong bearish sentiment on the pair, it is quite possible to do this. As for the players on the rise, their positions now look much weaker than a week earlier. For trading on EUR/USD to come under the control of the bulls, they need to return the rate above 1.2000, then continue to rise and close the week above the red line of the Ichimoku Tenkan indicator, which is at 1.2220. Given the relentless pressure, which is also helped by the bearish divergence of the MACD indicator, it will be very difficult to do this. The ECB and the press conference of Christine Lagarde could help the euro bulls, however, it is unlikely that these events will radically change the situation since nothing new can be expected from the ECB. 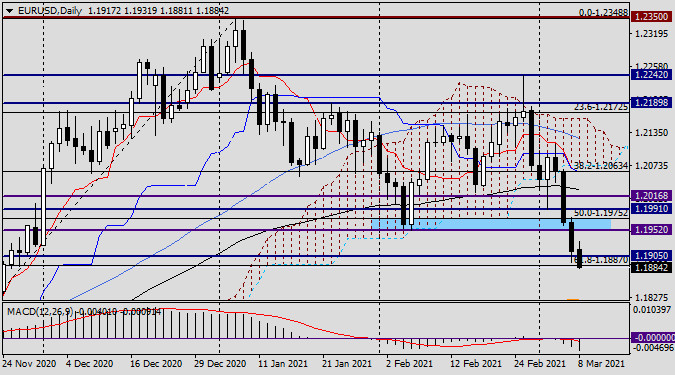 This chart clearly shows a strong and confident breakdown of the support level of 1.1952. Moreover, during Friday’s decline, the pair fell even below the mark of 1.1900 and showed the minimum trading values on March 5 at 1.1893, but bounced back from this level. However, the bears have already conducted the first test for the breakdown of 1.1900, and now each new attempt to go down this mark will have a much better chance of success. If the quote is fixed by one or more candles under 1.1952, on a pullback to the selected and already broken zone, you can prepare for sales, which remain the main trading recommendation for the euro/dollar. I will indicate more specific prices for opening short positions in tomorrow’s EUR/USD review, taking into account the consideration of smaller time intervals. In the meantime, I suggest focusing on the price zone of 1.1950-1.1985, and in the event of a pullback of the pair to these prices, consider opening deals for sale.