EUR/USD bounced back from 1.2 psychological level and now is almost to reach 1.21 due to USDX’s drop. Still, the rebound could be only a temporary one if the US Dollar Index increases again.

The US is due to release high-impact data till the end of the week. The economic figures could be decisive for EUR/USD. Positive data could help the greenback to resume its short-term appreciation versus the other major currencies.

Today, the ADP Non-Farm Employment Change is expected around 203K jobs higher compared to 174K in January. Moreover, the ISM Services PMI could remain steady at 58.7 points, while the Final Services PMI is expected at 58.9. 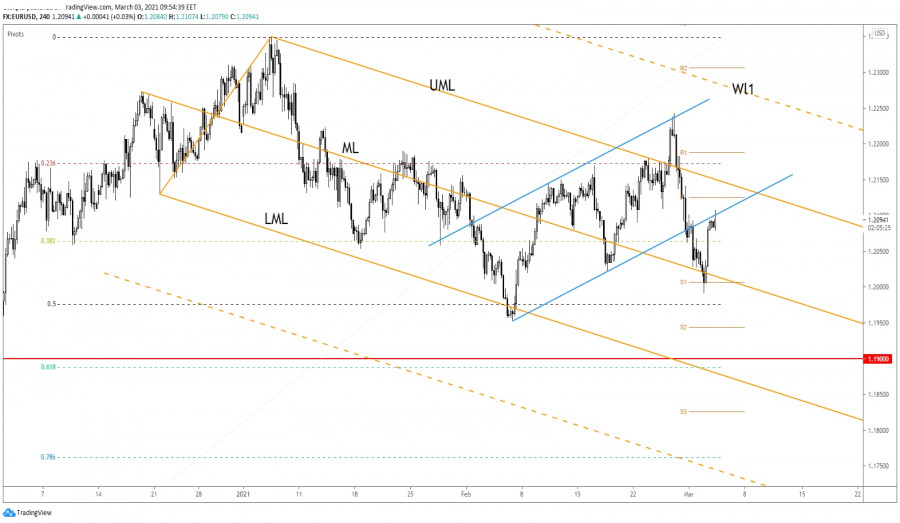 EUR/USD registered an aggressive rebound after reaching the S1 (1.2006) and 1.2 levels. The median line (ML) represents important dynamic support as well, so the short-term bounce-back could be natural after the most recent sell-off.

Technically, EUR/USD has dropped from a minor up channel. The aggressive breakdown signaled that the price could still come back to retest the channel’s support before resuming its downside movement.

EUR/USD failed to stabilize above 23.6% retracement level, R1 (1.2188), and beyond the descending pitchfork’s upper median line (UML) confirming high selling pressure. Personally, I believe that the pair could drop deeper as long as it stays under the Pivot Point (1.2125) and under the UML.

EUR/USD could drop after testing the minor uptrend line, channel’s support, or after registering only false breakouts above the Pivot Point (1.2125) and through the upper median line (UML).

The pair will definitely drop if the US Dollar Index (USDX) increases again after the current decline. We’ll have a good selling opportunity if EUR/USD drops and closes below the S1 (1.2006) again.