Trading for February ends today. The results of the weekly and monthly trades will be summed up on Monday, taking into account the actual closing of the week and month. Today, we will consider the options for closing trades on February 22-26, as well as interesting trading ideas, if there are any. If we consider the fundamental component, then yesterday’s extensive block of macroeconomic data from the United States was far from ambiguous. Thus, orders for durable goods and initial applications for unemployment benefits came out better than the forecast values. But the revised data on US GDP for the fourth quarter were worse than experts’ expectations. All the details can be found in the economic calendar. Today, no important data is planned from Europe, and all the attention of market participants will again be turned to American statistics. At 14:30 London time, we will find out how much the income and expenses of Americans have changed, and the basic price index of personal consumption expenditures will also be published. A little later, reports on consumer sentiment from Reuters/Michigan, as well as the Chicago purchasing managers’ index, will be released. 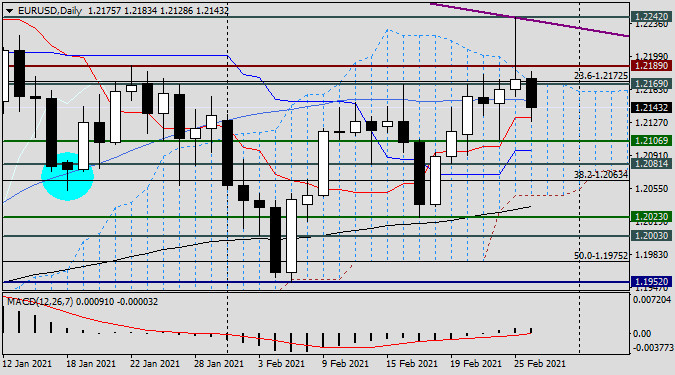 At yesterday’s trading, the main currency pair of the Forex market showed noticeable volatility. After rising to 1.2242, the single currency bulls were unable to hold the exchange rate at such high values and loosened their grip. Their opponents did not fail to take advantage of this. As a result, a candle with an incredibly long upper shadow and a small bullish body appeared on the daily chart. Usually, after the appearance of such candles, the rate begins to fall, which is observed at the time of writing this article. We can assume that such a course of weekly trading was influenced by the speech of the Chairman of the Federal Reserve System (FRS) of the United States Jerome Powell in the Senate. The main point of Powell’s speeches should certainly be considered another confirmation that interest rates will remain at the current low values until the US economy shows clear signs of improvement and recovery to the pre-crisis values that were observed before the COVID-19 pandemic. If we briefly touch on the topic of coronavirus, the main point, both in Europe and in the United States, is universal vaccination of the population. It is worth noting here that in the United States, it is taking place at a faster pace, while the EU authorities can not deal with the manufacturers of vaccines on the timing and volume of deliveries, as well as certification. 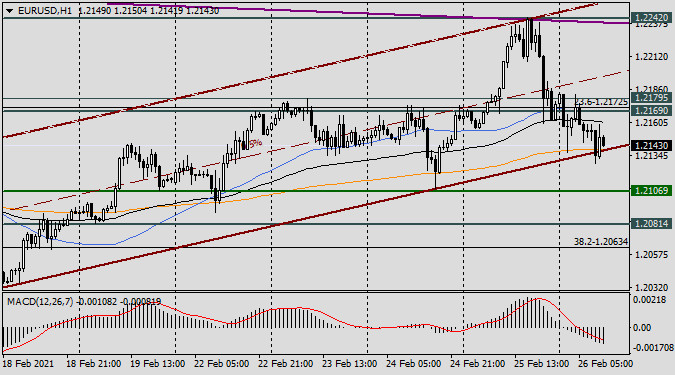 If you go to the trading recommendations, then on the last day of weekly and monthly trading, it is quite difficult and risky to choose the positioning option. Given that the euro/dollar is currently trading at the support line of the ascending hourly channel, you can try to buy, but with small goals in the area of 1.2160-1.2190. In turn, from the same price zone, it is worth considering opening short positions, but also with a small profit near 1.2140. In general, given the course of yesterday’s trading, we can conclude that the strength and significance of the mark of 1.2200 were not exaggerated. Players on the increase in the exchange rate have significant problems with passing up this mark, which gives preference to sellers. We will analyze the technical picture of EUR/USD in more detail on Monday when the results of the closing of weekly and monthly trading will be known.