Ethereum is trading lower at 1,488 level versus 2,040 all-time high reached last week. It’s still located above major support, demand, are, so the traders and investors could push it higher again.

We’ll see what will really happen in the next few days. Bitcoin dropped aggressively as well in the short term. BTC/USD’s further drop could force ETH/USD to decline further as well. 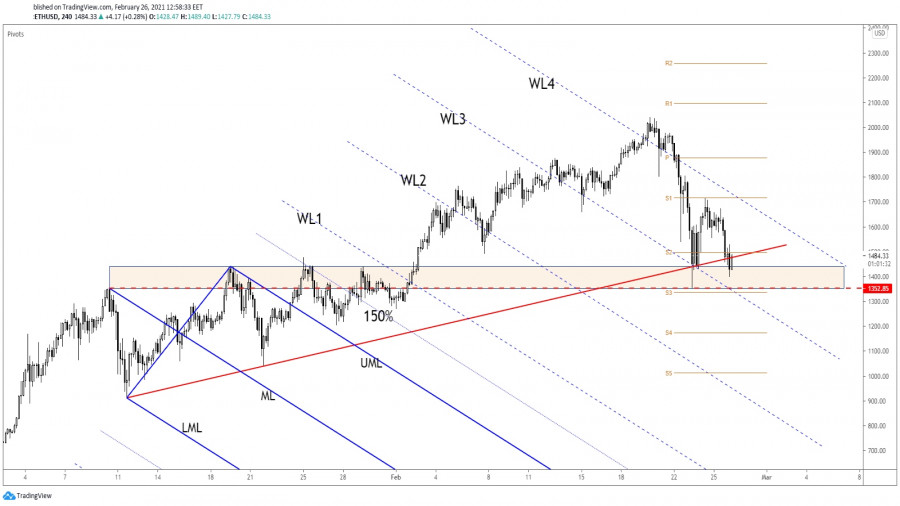 Ethereum stands above 1,400 – 1,352 support area trying to come back above the red uptrend line. Dropping and stabilizing below the $1,352 level and under the S3 (1,336) could signal a broader corrective phase.

On the other hand, a new false breakdown through the red uptrend line followed by a consolidation above the S2 (1,497) could indicate a new bullish momentum. ETH/USD is trapped between WL4 and WL3, warning lines, so the bearish pressure remains high as long as it is traded under the fourth warning line (WL4).

Sell a bearish closure under 1,300 psychological level using the 1,000 level as a downside target.

Buy ETH/USD if the price prints a major bullish engulfing on the 1,352 – 1,400 area or a false breakdown with great separation, a pin bar. We’ll get a great long opportunity also if the rate jumps and closes again above the S1 (1,716) level.