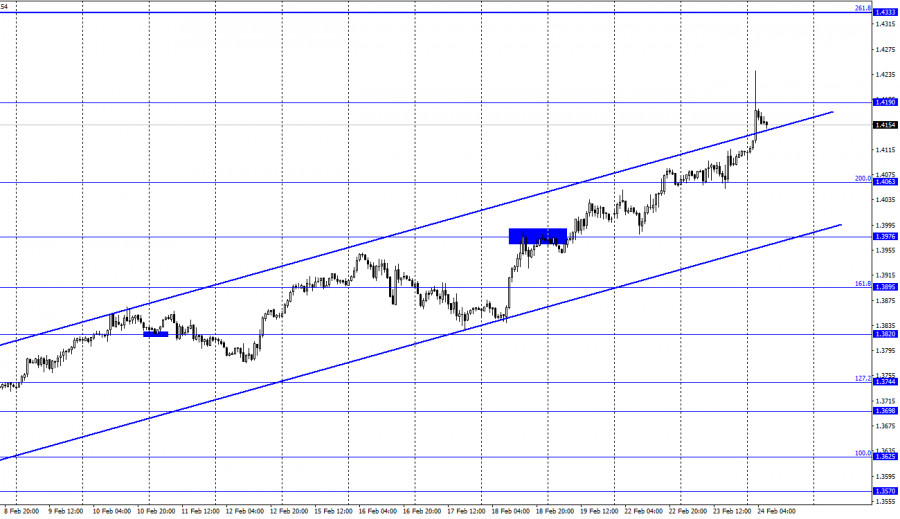 According to the hourly chart, the quotes of the GBP/USD pair performed an increase to the level of 1.4190, a rebound from it, and now traders can count on a slight drop in the direction of the corrective level of 200.0% (1.4063). As already mentioned in the headline, in the last few days, several news reports have come from the UK, which could increase the interest of traders in the British. Although, where is even higher? This question concerns both the rate of the British dollar itself and the interest in it from traders. Let me remind you that the Briton has been growing for several months, and it was not always possible to explain its growth. The other day, Boris Johnson announced that the country will begin to gradually come out of quarantine from March. A detailed plan was released, and some traders were happy about it. Also, the UK is in third place in the world in terms of the rate of vaccination of the population, which is also positive news. However, do not forget that in the United States, the vaccination process is in full swing. President Joe Biden promised that during his first hundred days in office, he would provide the country with 100 million doses of the vaccine. According to the latest data, 1.3 million people are vaccinated every day in America. Thus, it is unlikely that positive epidemiological news can be regarded as the reason for the growth of the Briton. Recent economic reports have also been upbeat. Yesterday, the unemployment rate showed a negative trend, increasing to 5.1%. According to economists, unemployment will continue to rise in the UK in the coming months. Less significant reports on wages and applications for unemployment benefits were slightly better than traders’ expectations. 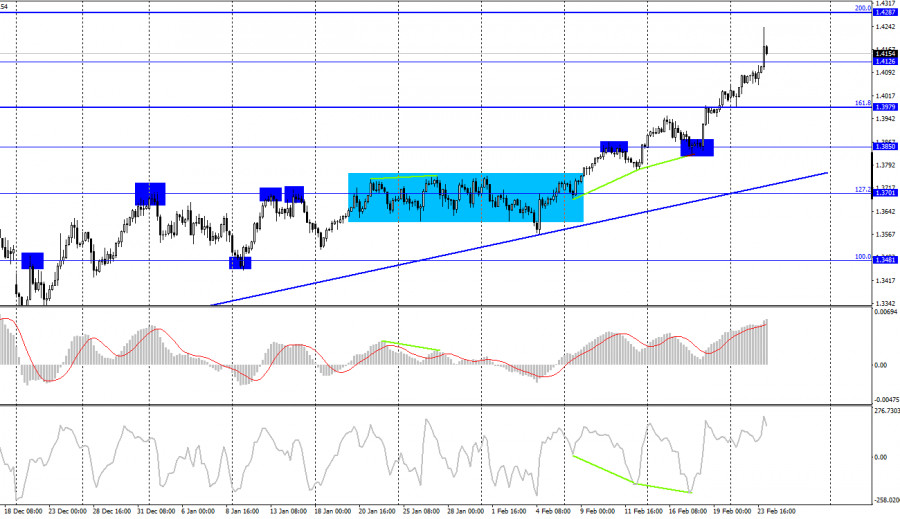 On the 4-hour chart, the GBP/USD pair closed above the level of 1.4126. Thus, the growth process can be continued towards the next Fibo level of 200.0% (1.4287). The rebound of quotes from this level will allow us to count on a reversal in favor of the US currency and a slight fall in the direction of the levels of 1.4126 and 1.3979. Let me remind you that the ascending trend line also remains unchanged, which continues to characterize the current mood of traders as “bullish”. 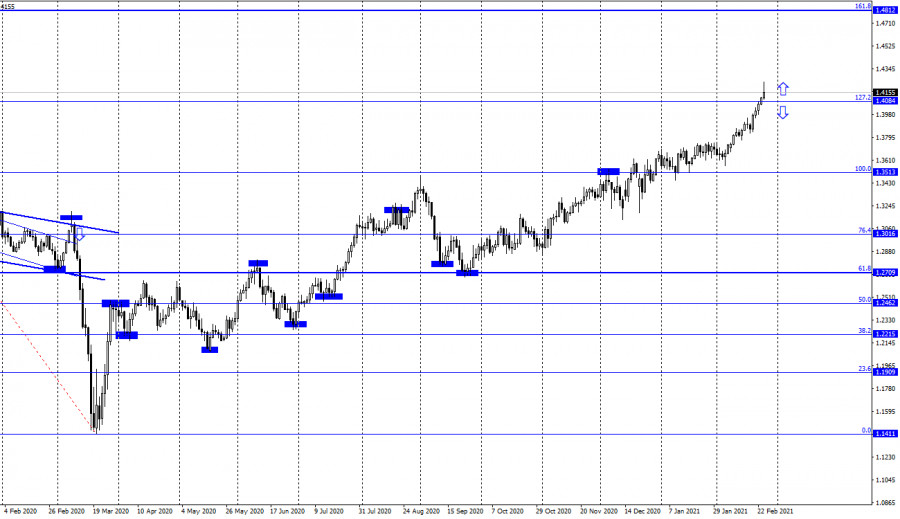 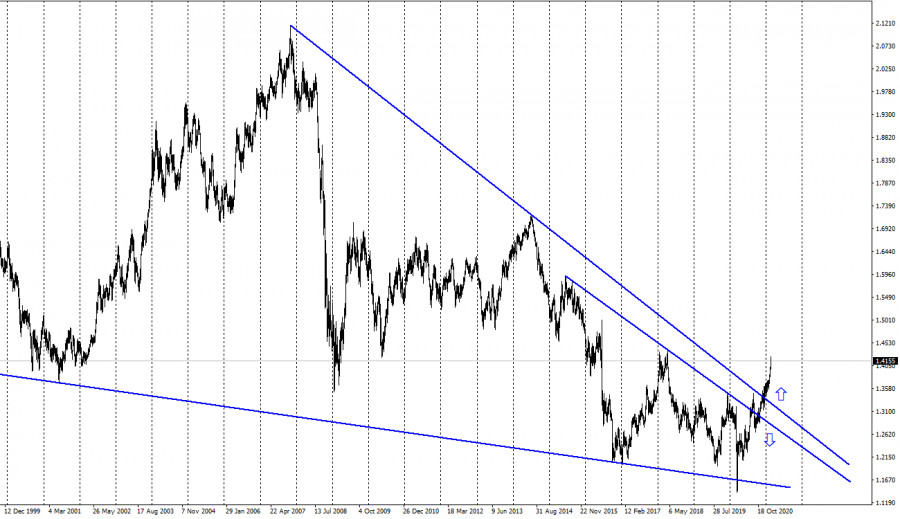 On Tuesday, the US and UK calendars contained interesting events, however, the peak of the growth of the British dollar fell on Wednesday night, when all the events of Tuesday were already far behind. In any case, none of the reports and events could cause the pound to rise by another 170 points.

US – Federal Reserve Board of Governors Chairman Jerome Powell will deliver a speech (15:00 GMT).

On February 24, several important performances will take place in the UK and the US, in particular Andrew Bailey and Jerome Powell. 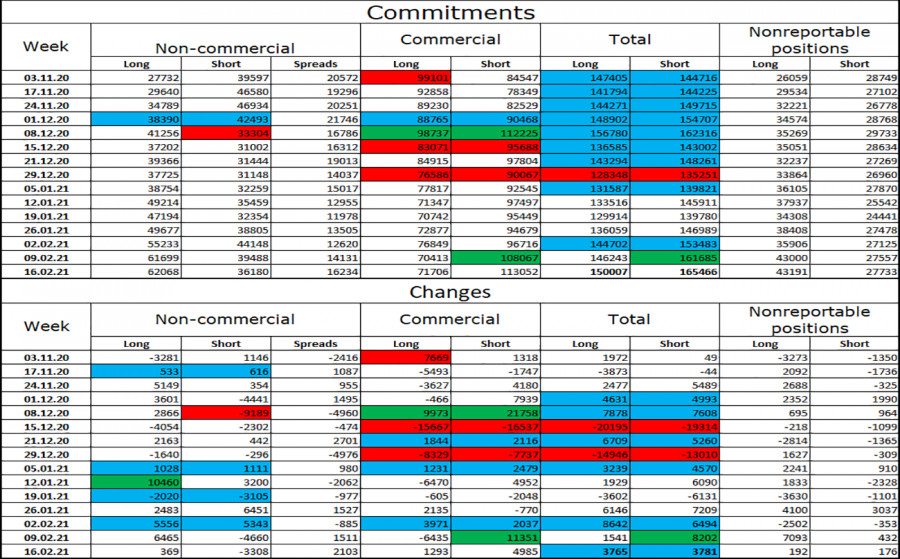 The latest COT report from February 16 on the British pound was extremely boring, as was the report on the euro. During the reporting week, the “Non-commercial” category of traders opened 369 long contracts and closed 3,308 short contracts. Thus, the mood of speculators has become more “bullish”, which further increases the chances of the British dollar continuing to grow. In general, during the reporting week, almost an equal number of long and short contracts were opened by all players. Nevertheless, despite the small changes, the pound continues a strong and long process of growth.

EUR/USD and AUD/USD: Risk assets rose after a sharp increase in US Treasuries. Meanwhile, Biden and Merkel are considering