Only one signal to enter the market appeared yesterday afternoon. Let’s take a look at the 5-minute chart and figure out what happened. Forming a false breakout in the support area of 1.4055 led to forming a signal for opening long positions, afterwards the pound quickly returned to resistance at 1.4105, where I recommended taking profits. The movement was around 50 points. It did not settle above this range, but the pound continues to rise in today’s Asian session. 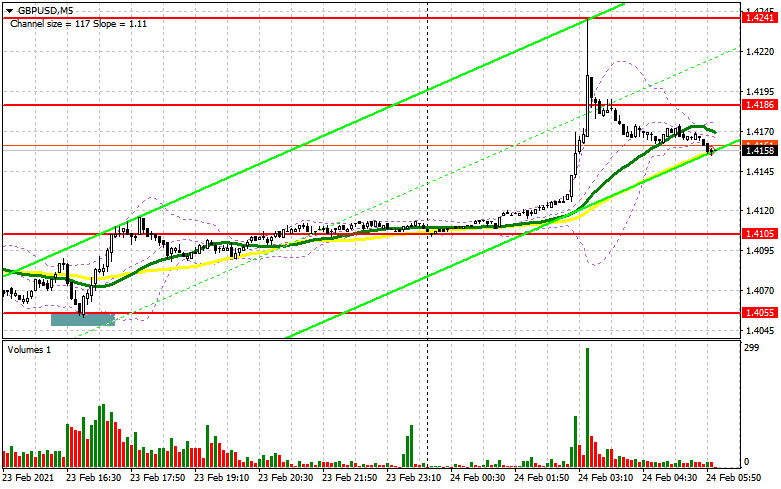 Good data on the UK labor market and the prospect of lifting quarantine measures and lifting the lockdown has fuelled Asian investors to make large purchases on the pound. And although today, we expect to hear parliamentary hearings on the Bank of England’s monetary policy report and a speech from Bank of England Governor Andrew Bailey, traders continue to believe in the pound’s strength amid a faster recovery in the British economy this spring. The optimal scenario for opening long positions in sustaining the bull market would be forming a false breakout in the support area of 1.4119, just below which are moving averages that play on the side of buyers. In this case, one can count on a new wave of growth for the pound and its return to the 1.4186 area, the pair’s succeeding growth depends whether the price can surpass it or not. A breakout and being able to test this level from top to bottom will lead to forming a new signal to open long positions in order to update 1.4241, where I recommend taking profits. The succeeding target will be a high at 1.4324. In case buyers are not active around 1.4119, and the growth should be quite sharp from this level, then I recommend holding back from long positions until a low like 1.4055 has been tested, from which you can buy the pound immediately on a rebound, counting on an upward correction of 25-30 points within the day… The next level to buy is seen in the area of 1.3983, being able to test it will mean a reversal of the upward trend.

The initial task of the bears is to regain control of support at 1.4119, which they missed in today’s Asian session. However, it is clear that this will not be so easy, given what kind of bull market we are currently seeing. Only a consolidation below this level and a test of it on the reverse side can create a signal to open short positions in order to pull down the pair to the 1.4055 area, where I recommend taking profits. The succeeding target will be the 1.3983 level. In case GBP/USD grows in the first half of the day, it is best not to rush to sell, but wait for a false breakout in the 1.4186 area. I recommend opening short positions immediately on a rebound but only from a high of 1.4241, counting on a downward correction of 30-35 points within the day. 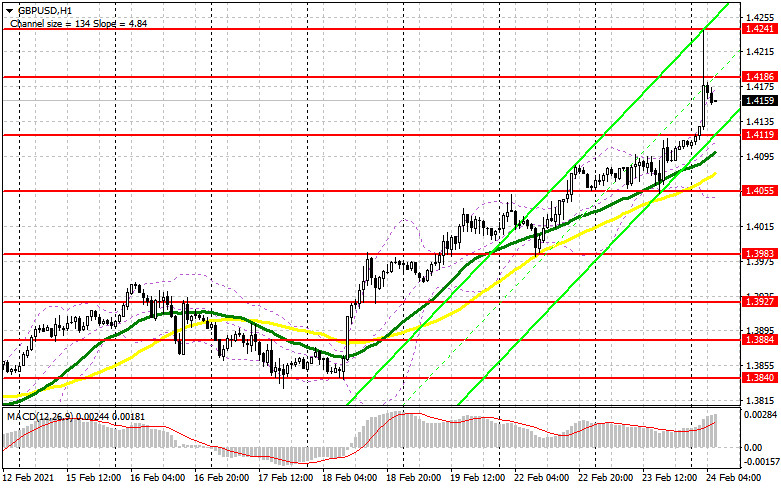 The Commitment of Traders (COT) report for February 16 revealed a reduction in both long and short commercial positions. Despite this, the bulls break through to new highs each time, taking advantage of the good news on vaccinations in the UK and good fundamentals, indicating economic growth even during the lockdown. The news that the UK will resort to easing quarantine measures in March will further fuel investors’ interest in the pound. Long non-commercial positions fell from 60,513 to 60,269. At the same time, short non-commercial positions fell from 39,395 to 38,102, which kept the market bullish. As a result, the non-commercial net position rose to 22,167 from 21,118 a week earlier. The weekly closing price was 1.3914 against 1.3745. Any downward corrections with an immediate buy-back of the pound once again proves the presence of large players in the market. Constant updates of local highs and consolidation on them will contribute to the bullish trend that we have been observing since the beginning of February this year.

Trading is carried out above 30 and 50 moving averages, which indicates the pound’s succeeding growth in the short term.

A breakout of the upper border of the channel at 1.4170 will lead to a new wave of growth for the pound. In the event of a decline, support will be provided by the lower border of the indicator in the 1.4055 area.