If you look at the 5-minute chart, you will see that we approached the 1.2133 level several times in the afternoon, but we could not wait for a false breakout to form there. Due to low volatility, there were no signals to enter the market yesterday. Even the speech of Federal Reserve Chairman Jerome Powell did not make any changes in the market, since, in fact, the head of the Fed repeated everything that he said during the last meeting of the committee. 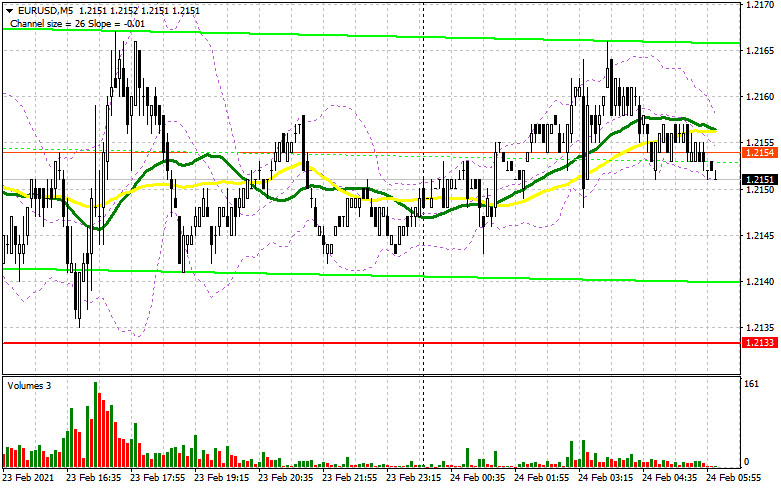 As I noted above, from a technical point of view, not much has changed. The revised levels have not been tested, and the whole strategy for the previous day remains relevant until now. Important fundamental statistics on the eurozone will not be released in the morning, so it is possible that the pair will still remain in a horizontal channel, and buyers will focus on protecting support at 1.2135. Forming a false breakout in that area creates a good entry point for opening long positions in hopes to continue the upward trend. If bulls are not active at this level, I recommend postponing long positions until a low like 1.2093 has been tested, from where you can buy the euro immediately on a rebound, counting on an upward correction by 20-25 points within the day. An equally important task for the bulls is to return to the monthly high in the area of 1.2178. Testing this level from top to bottom can create an excellent signal for opening long positions in euros for the purpose of rising towards the high of 1.2220, where I recommend taking profits. Another challenge is to update resistance at 1.2260.

The bears approached the 1.2133 level several times yesterday, but failed to fall even further than this range. This morning, I recommend opening short positions against the upward trend in case a false breakout forms in the resistance area of 1.2178. Returning to the area below the 1.2135 level and being able to test it from the bottom up can create a convenient point for entering the market using short positions, in hopes to further pull down EUR/USD. Surpassing 1.2135 will quickly bring EUR/USD to the support area of 1.2093, where I recommend taking profit. The pair’s succeeding direction depends on this level, so you need to be very careful in that area. A breakout of this range will revert the upward trend. If the euro is in demand in the afternoon, and the bears are not active in the resistance area of 1.2178, then it is best to hold back from opening short positions until the test of a new high of 1.2220, from where you can sell EUR/USD immediately on a rebound in order to pull it down by 20-25 points within the day. The next major resistance is seen around 1.2260. 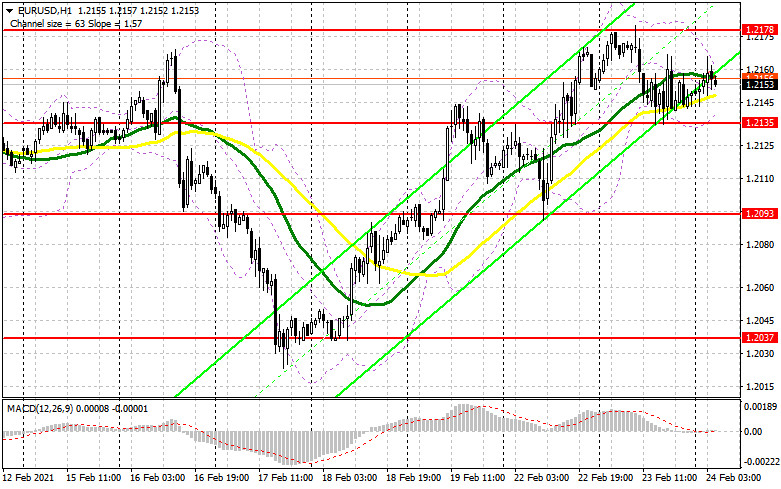 The Commitment of Traders (COT) report for February 16 revealed that there were no significant changes in the positions of large players, which once again indicates the temporary equilibrium of the pair before a new wave of growth this spring. The major decline from the previous week was won back, and this confirms the theory that the demand for the US dollar continues to decrease among investors. Therefore, a more correct approach to the market is to buy the euro for the medium term. A good factor for the euro would be the moment when European countries begin to actively roll back quarantine and isolation measures, and the services sector will start working in full force again, which will lead to an improved economic outlook and also strengthen the EUR/USD pair. The COT report indicated that long non-commercial positions rose from 220,943 to 222,895, while short non-commercial positions rose from 80,721 to 82,899. As a result, the total non-commercial net position slightly narrowed after rising to 140,006 from 140,222. The weekly closing price was 1.2132 against 1.2052 a week earlier, which indicates the presence of buyers in the market.

The volatility of the indicator is very low, which does not provide signals for entering the market.