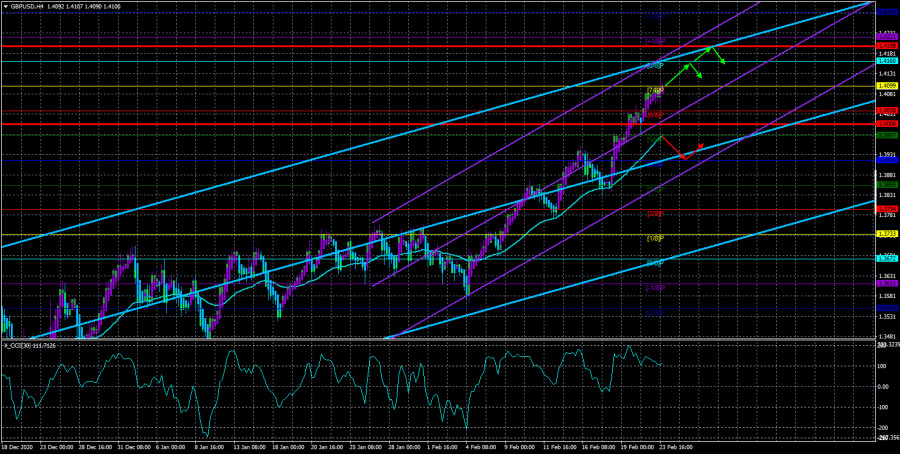 The British pound, unlike the European currency, showed no signs of a correction on Tuesday. However, this has long been no surprise to anyone. It is at this point of the uncorrelation of the two main pairs that we have already drawn the attention of traders. The fact is that the pound sterling continues to grow in pair with the dollar even during 2021 when the euro currency is mainly adjusted. At the same time, it is adjusted quite fairly. After all, there must be corrections in any trend. But the rules are not written for the pound. At first, the pair was trading in the “high-volatility swing” mode, then in the “just swing” mode, now it has started a strong upward movement, and in general, the period of its almost recoilless growth has been going on for 5 months, which is visible on the higher timeframes. In previous articles, we looked at the question of why the US currency has become cheaper against the euro and the pound in the last 11 months. And we concluded that the main factor of this phenomenon is the factor of changing the ratio of the volume of the money supply. Simply put, in the United States, thanks to the actions of Congress and the Fed, the money supply increased by one and a half times in 2020 (according to minimal estimates). In the UK, the increase was 15 percent. So, overall, why the dollar has been depreciating since the start of the pandemic around the world is clear. However, we also focused the attention of traders on the fact that the British pound should have become more expensive much less intensively than the euro currency. After all, there are a huge number of problems in the UK, real and potential. Let’s say that the markets act “in fact” and discard now the problems that the British economy can only face in the future (the loss of Scotland, for example), but there are still a lot of other problems that are already here and now. But the pound is still rising, like the US government debt. And we believe that the “speculative factor” plays an important role here, and the entire growth of the British currency can be called taking place under the auspices of bitcoin.

We also continue to insist on our opinion that almost the entire fundamental background is now irrelevant for the pound/dollar pair. Some analysts have recently concluded that the new growth of the pound is associated with the announced easing of quarantine measures in the UK. They say that the country’s economy will now recover much faster. We are ready to ask in this case the question, why did the pound sterling not react to the two winter “lockdowns”? It turns out that traders either react only to positive news and messages for the pound or do not react to them at all. We are leaning towards the second option. The same applies to the latest macroeconomic reports on business activity in the service sector, GDP, and inflation. All three showed positive dynamics, so most traders immediately explained these reports as the last round of the upward movement, which is already 500 points. In this case, why did the pound not become cheaper when it became known about the reduction of 7.8% of GDP in annual terms? Or did the PMI for the services sector fall below the 40.0 level this winter?

Boris Johnson did indeed announce a plan that would gradually lift the quarantine restrictions that had been in place all winter. For example, from March 8, all schools will have to open and two people will be allowed to walk in public places. And from March 29, companies of up to 6 people will be allowed to gather in nature. This is the first stage of the easing of quarantine measures. As part of the second stage, all shops, hairdressers, beauty salons, zoos, swimming pools, gyms, and fitness clubs will start operating from April 12. Restrictions on travel abroad will also be revised. The third stage is planned for May 17. From this date, companies of up to 30 people will be allowed to gather in the open air, and cinemas, museums, hotels, and football stadiums will also resume their work. The last fourth stage involves the opening of nightclubs and the lifting of all other restrictions on social contacts from June 21. Boris Johnson also said that before the introduction of each next stage, a detailed and thorough analysis of the epidemiological situation will be carried out and in case of a deterioration of the results, the introduction of the next stage may be postponed.

Thus, even on the example of the last couple of weeks, it becomes clear that the growth of the British currency is illogical and groundless. Over the past couple of weeks, nothing has changed in the fundamental background enough for the pound to rise by another 500 points after already rising by 21 since the beginning of the pandemic. Therefore, the current upward movement of the pair can be compared with the growth of bitcoin in the last 4 months. However, even bitcoin has started to adjust and has lost about 20% in the last couple of days. However, the analogy with the growth of the most popular cryptocurrency is relevant. Thus, for now, traders can only continue to trade for an increase. The most important thing is that there is a trend, and the trading system “Linear Regression Channels” is trending, so it brings a good profit on the trend. In principle, even with the naked eye, it is noticeable that over the past three weeks, there have been only a few downwards pullbacks, which were signaled by the Heiken Ashi indicator. All the rest of the time, they painted the bars purple, that is, calling for trading to increase. Therefore, nothing has changed now. 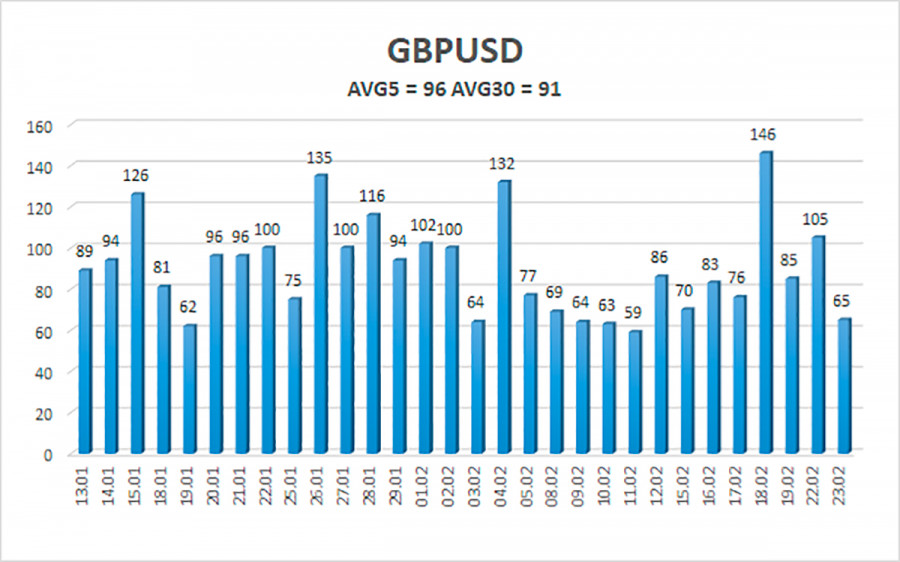 The average volatility of the GBP/USD pair is currently 96 points per day. For the pound/dollar pair, this value is “average”. On Wednesday, February 24, therefore, we expect movement within the channel, limited by the levels of 1.4006 and 1.4198. A reversal of the Heiken Ashi indicator downwards signals a round of corrective movement.

Why Perspective Is Key With Recent Weakness In Stocks

The Gold/Silver Ratio Continues To Fall