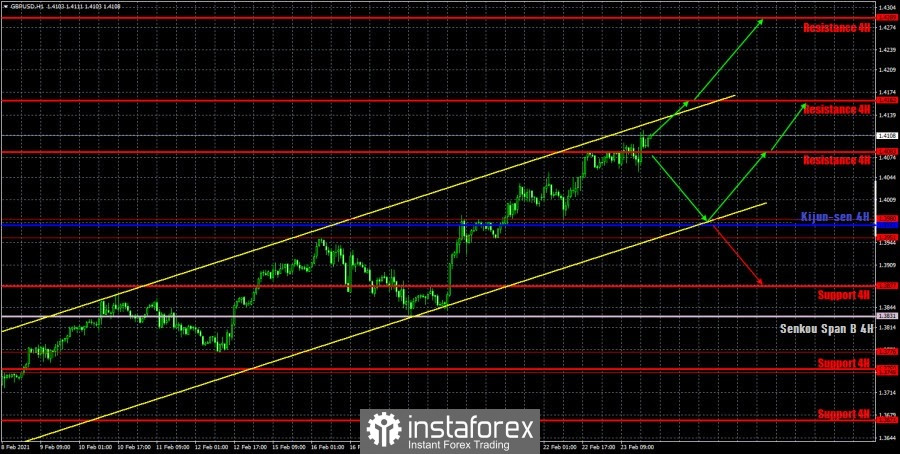 The GBP/USD pair simply continued its upward movement on Tuesday, not paying attention to any factors. We have already repeatedly drawn your attention to all the illogicality and groundlessness of such a firm growth from the pound. Moreover, in the context of the last 11 months, five months, and in the last two weeks. But what if traders continue to invest dollars in the pound, which leads to its absolutely wild growth? We have already said that, in general, the reasons for the dollar’s fall are clear and understandable. We analyzed them in our fundamental articles. However, the pound is not just growing. It has been rising non-stop for five months now!!! From a technical point of view, the pair continues to be in an upward movement on the hourly timeframe, which is now being indicated by an upward channel. The bulls managed to overcome the resistance level of 1.4083 yesterday, so now it can rise to the 1.4162 target. At the same time, a downward correction cycle may begin at any moment. We have also already drawn your attention to the fact that many signals have recently been false. In our last review, we recommended selling the pound if the price settles below the critical line. No such signal has been generated over the past day. We advise you to buy the pair if the quote surpasses 1.4083, but traders somehow very unconvincingly settled for higher. On the 15 minute timeframe, you can see that the pair traded along the 1.4083 level for most of the day. There was no clear rebound or breakthrough. 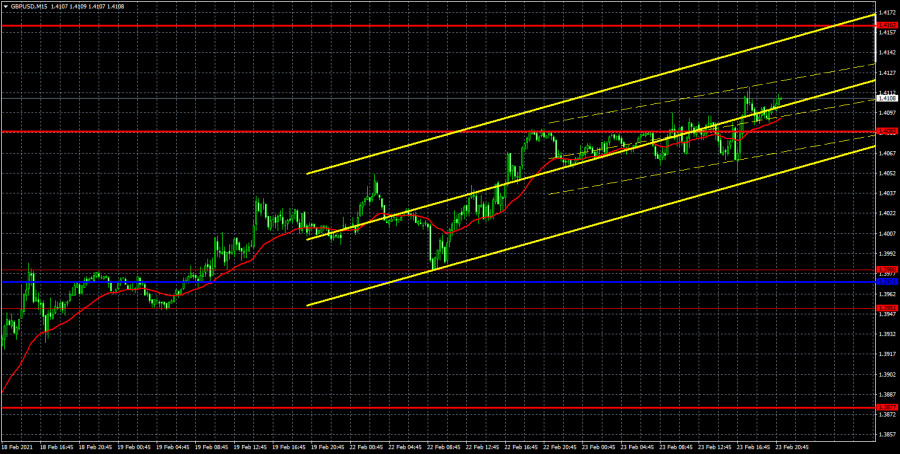 Both linear regression channels are directed to the upside on the 15-minute timeframe, so the short-term trend is still up. However, it cannot be otherwise, given the general trend. We failed to overcome the 1.4083 level, so we draw your attention to the fact that the pair generates weak or false signals too often. 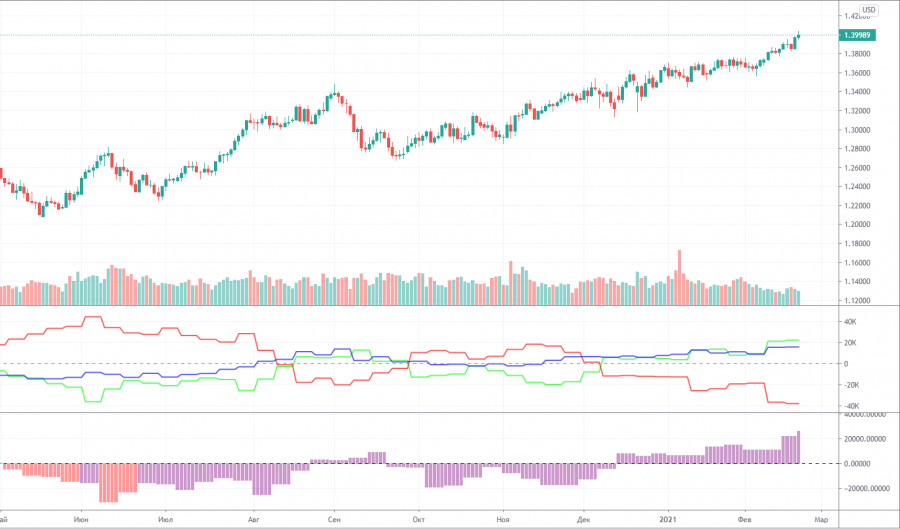 The GBP/USD pair rose by 160 points during the last reporting week (February 9-15). If in the last weekly reviews we said that the pound is gradually getting more expensive and “is not rushing headlong to the upside”, now, perhaps, we can say that it is. The latest Commitment of Traders (COT) report for the pound was more or less neutral, however, the bullish sentiment is on the face. This is well signaled by the first indicator in the chart, the green and red lines of which have been moving away from each other in recent weeks. Over the last reporting week (recall that the COT report comes out with a three-day delay), a group of non-commercial traders opened 369 Buy-contracts (longs) and closed 3,300 Sell-contracts (short). Thus, the net position of non-commercial traders increased by almost 4,000. Consequently, major players became even more bullish. In total, professional traders have 62,000 buy contracts and 36,000 sell contracts open. That is, the difference is approximately one and a half times and it has become such in recent weeks. For the euro, for comparison, the difference is three times and the upward movement is much weaker. Thus, even the COT reports say that such a strong and almost recoilless strengthening of the pound is unreasonable. Nevertheless, the upward trend persists and, therefore, you can trade bullish.

Reports on unemployment, applications for unemployment benefits and changes in average wages were published in the UK. Now we look at the charts and see that the pair moved in a side channel with a width of 40 points for the past Asian and European trading sessions. Need I say that all the macroeconomic statistics were once again ignored? Although traders had the opportunity to buy and sell the pound. The fact is that wages rose more than expected, and the number of applications for unemployment benefits decreased by 20,000, and did not increase by 14, as expected. However, at the same time, unemployment also increased, although only by 0.1%. In general, the entire package of reports can be described as neutral.

Bank of England Governor Andrew Bailey is set to speak in the UK, as well as several members of the monetary committee of the central bank. Federal Reserve Chairman Jerome Powell will also speak. As we mentioned in the euro article, we do not expect any new information from Powell, but maybe Bailey will provide such information to the markets?

We have two trading ideas for February 24:

1) Bulls continue to hold the initiative in their hands. Thus, the upward movement has been resumed, but it is not known how long it will continue. The pair is now moving very illogically and ignores technical signals. In case the price clearly rebounds from the Kijun-sen line (1.3971), you can consider opening long positions while aiming for the resistance level of 1.4083. Take Profit in this case can be up to 90 points. You can consider longs and aim for 1.4162 in case the price surpasses 1.4083. But, as we mentioned, a correction can unexpectedly start.

2) Sellers continue to rest and watch the bulls. So new short positions are not recommended right now, although the pair may start a new round of downward correction. You can try to consider shorts in small lots with 1.3877 as the target, but only below the critical line (1.3971), and at the same time the rising channel.