In my morning forecast, I paid attention to the level of 1.2139 and recommended to act based on it. Let’s look at the 5-minute chart and talk about what happened. Given the low volatility of the market, the test of the level of 1.2139 did not take place in the first half of the day, so there were no signals to enter the market. The fundamental data on the European economy was ignored by traders, as it was not of particular importance. The guidelines of buyers and sellers remained the same. 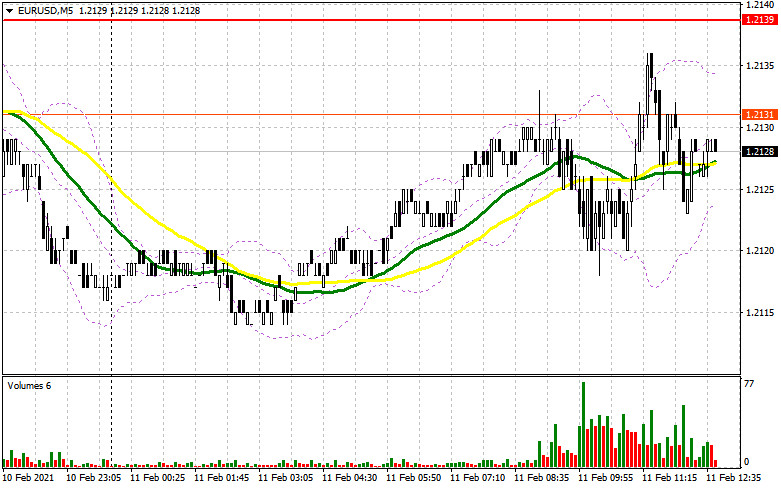 Attention in the second half of the day will be drawn to the report on the US labor market for the past week. If the indicators are better than economists’ forecasts, the pressure on the European currency will increase, and we will see a downward correction. Bad data can lead to a breakout and consolidation above the resistance of 1.2139. A test of this area from top to bottom forms an excellent signal to open long positions in the euro with the aim of further growth in the area of the maximum of 1.2175, where I recommend taking the profits. The more distant target of the bulls remains the resistance of 1.2220. If we observe a further decline in the pair during the US session, then buyers will shift their focus to the support of 1.2103. Only the formation of a false breakout there forms a good entry point into long positions with the expectation of continuing the upward trend. In the absence of buyer activity at this level, I recommend postponing long positions until the test of the minimum in the area of 1.2069, from where you can buy the euro immediately on the rebound in the expectation of an upward correction of 20-25 points within the day.

I recommend opening short positions today in the second half of the day against the upward trend only if a false breakout is formed in the resistance area of 1.2139, which forms a signal to sell the euro. Strong data indicating the growth of the US labor market may increase the pressure on the pair. This will allow the bears to return EUR/USD to the support area of 1.2103, from the breakdown of which the further direction of the pair will depend. A breakout and a test of this level from the bottom up will form a new entry point for sales, which will push EUR/USD to a minimum in the area of 1.2069, where I recommend taking the profits. A more distant target will be the area of 1.2035. If during the US session we will observe the upward trend of the euro and the bears will not show any activity in the resistance area of 1.2139, then it is best to postpone short positions until the test of a new high of 1.2175, from where you can sell EUR/USD immediately to rebound to reduce by 20-25 points within the day. The next major resistance is seen around 1.2220. 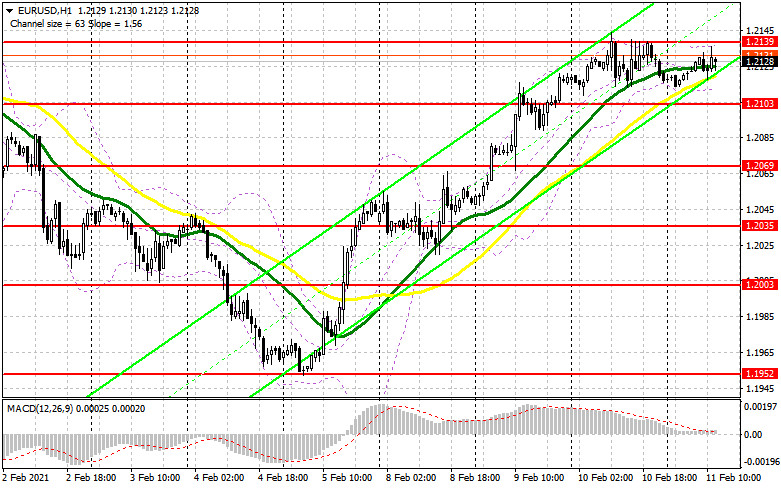 Let me remind you that the COT report (Commitment of Traders) for February 2 recorded a sharp increase in short positions and a reduction in long positions, which reflects the downward correction of the pair in late January and early February of this year. Weak fundamental data on the eurozone economy and lower economic estimates given by representatives of the European Central Bank last week limit the upward potential of the euro, as well as the fact that vaccination in the eurozone will take place at a slower pace than expected. All this will lead to a double-dip recession of the European economy in early 2021, but it is unlikely to seriously affect the medium-term prospects for the recovery of the EUR/USD. Therefore, with each significant downward correction of the pair, the demand for the euro will only increase, and the lower the exchange rate, the more attractive it will become for investors. The prospect of lifting the quarantine will keep the market positive in the future. The COT report shows that long non-profit positions declined from 238,099 to 216,887, while short non-profit positions rose from 72,755 to 79,884. Due to the sharp decline in long positions, the total non-profit net position fell to 137,003 from 165,344 a week earlier. The weekly closing price was 1.2067 against 1.2142.

Trading is conducted in the area of 30 and 50 daily moving averages, which indicates the sideways nature of the market.

The volatility has decreased, which does not give signals for entering the market.