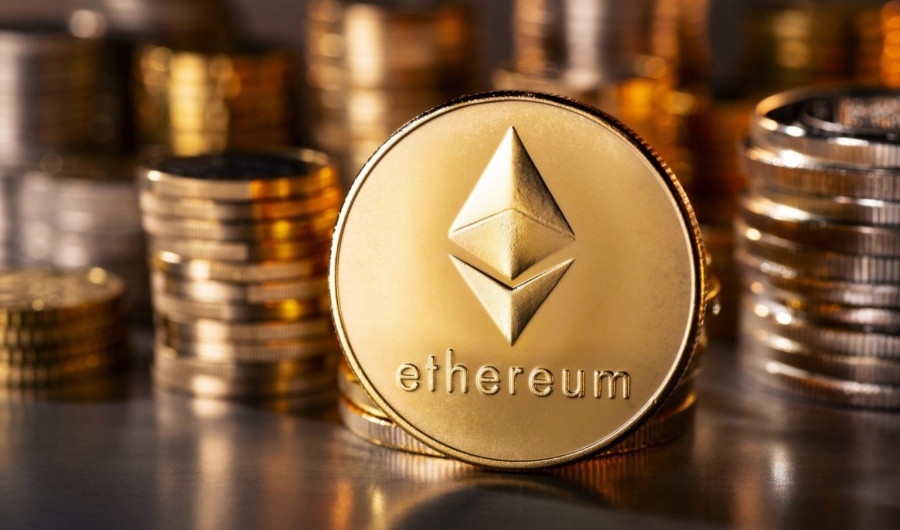 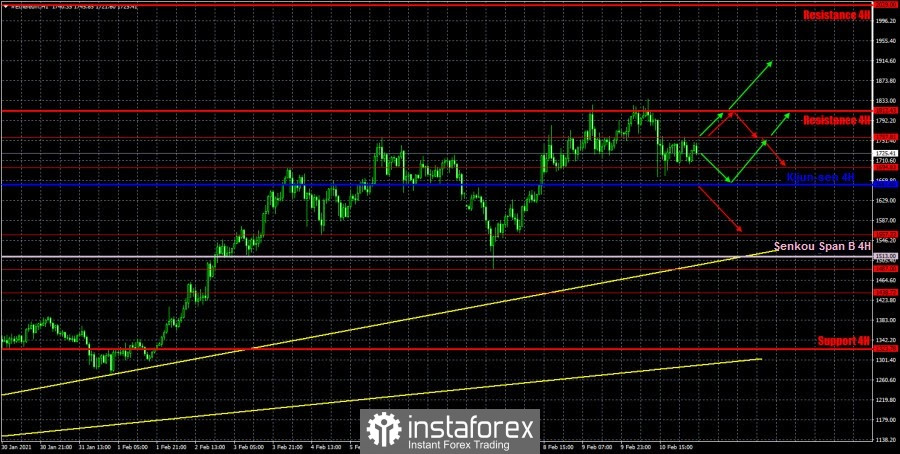 Ethereum tried to continue moving up in the hourly chart yesterday, but it failed to overcome the resistance level of $ 1812.43. After rebounding from this level twice or thrice, the quotes decline to the extreme level of $ 1694.83. However, the price managed to consolidate below it. In this case, the cryptocurrency traded almost the whole day in a narrow sideways channel ($ 1694.83 – $ 1757.81), not far from its absolute high. And since the price did not even try to consolidate below the critical line, the upward trend remains unchanged. It should be recalled that there are two ascending trend lines at the exit. However, if there are no new surprising events for the cryptomarket in the next few days, Ethereum may adhere to continue the correction. In the preview review, it was recommended to open long positions if there is a rebound from the Kijun-sen line or the price breaks through the level of 1812.43. Unfortunately, none of it happened yesterday. It was also recommended to sell this cryptocurrency when it consolidated below the Kijun-sen line, but to no avail. 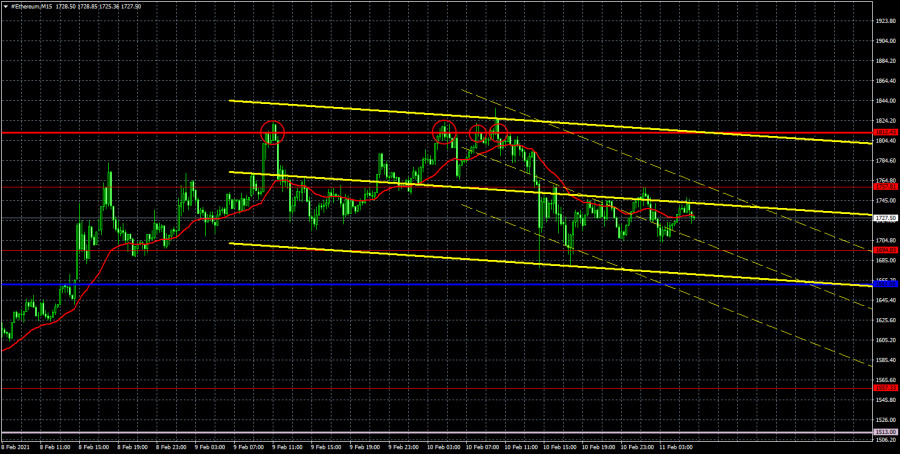 Both linear regression channels turned down on the M15 chart. The red circles seen in the chart indicate rebounds and false breakdowns of the level of $ 1812.43, wherein the price failed to settle above for more than 30 mins. Therefore, there was no consolidation above this level on the hourly chart, which means that it is not suggested to buy the cryptocurrency. Most likely, the quotes will stay in a side channel, tending to decline.

The more cryptocurrencies grow, the more people become interested in them. 10 years ago, Bitcoin was worth $ 5 per coin, but now, it is almost $ 50,000. The concept of cryptocurrencies is when the greater the demand, the more expensive the asset. During the previous days, all market participants and those simply interested have been discussing the prospects for Bitcoin and other most famous cryptocurrencies, such as Ethereum and Litecoin. It was already known that Ethereum has already entered the Chicago Mercantile Exchange, and one of the richest people on Earth, Elon Musk, believed in the “cue ball”, which caused its strongest growth and the growth of other cryptocurrencies. At the same time, Litecoin creator, Charlie Lee, said in an interview that Elon Musk’s belief in Bitcoin could revolutionize the entire cryptocurrency industry, as other large companies may follow Musk’s example. Over time, wages can be paid in cryptocurrencies, they can participate in payments for goods and services, and the recipients of cryptocurrencies will not immediately seek to transfer them to fiat money.

At the moment, almost 90% of investors in any cryptocurrency are hoping to be rich. That is, the main functions of money – a means of saving, accumulating and calculating – are not performed by cryptocurrencies. However, it won’t always be that way. Charlie Lee believes that cryptocurrencies will be able to participate in the real world one day on a par with ordinary money. In the meantime, the more people (especially the rich and famous) believe in cryptocurrencies, the more likely it is for them to continue to grow. However, one should not expect that all the prices of cryptocurrencies will rise. In 2017, both ether and bitcoin also soared up in a few months to record values, after which they fell by almost 90% from the initial growth. Ether started growing from $ 50, reached the value of $ 1414 at the very beginning of 2018, and then fell to $ 80. We should not be compliant that this will not happen again this year.

In any case, there are two trading ideas for February 11: