Gold trades at $1,841 level maintaining a bullish outlook after its failure to stabilize under the $1,800 psychological level. Also, its failure to approach and reach the $1,764 lower low in the last attempts indicates that the corrective phase is over and that the yellow metal could resume its major uptrend.

XAU/USD has bounced back due to USD’s depreciation. So, the price of gold could approach and reach new highs if the greenback continues to depreciate versus its rivals. In the short term, gold could slip lower trying to accumulate more bullish energy by testing and retesting the immediate support levels.

XAU/USD More A Buy Than A Sell! 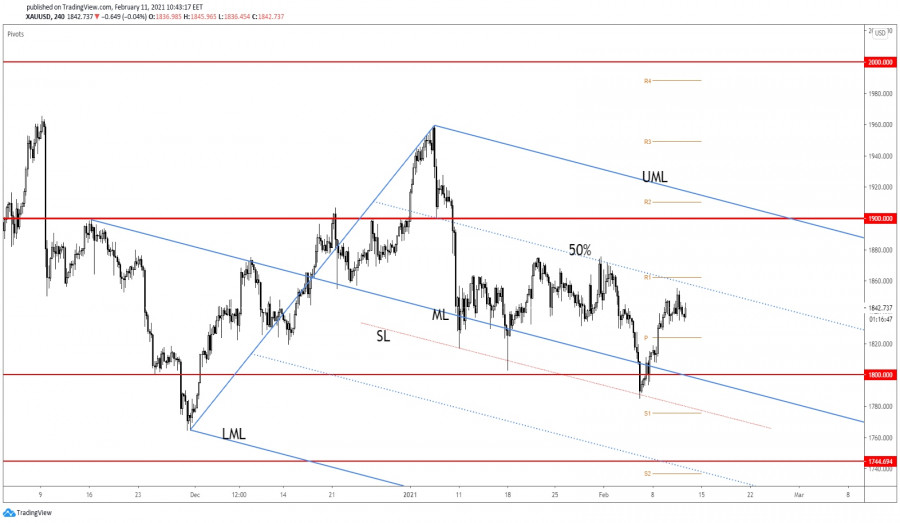 Gold is trapped between the upside 50% Fibonacci line and the inside sliding parallel line (SL1). Breaking above 50% and through the R1 (1,862) could really signal an up reversal. The aggressive breakout through the Pivot Point (1,823) indicates a further growth at least until the R1.

Technically, we cannot exclude a minor decline in the short term after the most recent bullish momentum. Personally, I believe that the major uptrend is safe as long as XAU/USD is traded above the 1,800 and above the median line (ML).

A potential retreat followed by a false breakdown with great separation through the 1,800 could bring a long opportunity. We’ll get a buying opportunity, a bullish signal, also after XAU/USD jumps and closes above the R1 (1,862).

1,900 and the upper median line (UML) could be used as upside targets if the price escapes from the down channel between the 50% and SL1 lines.