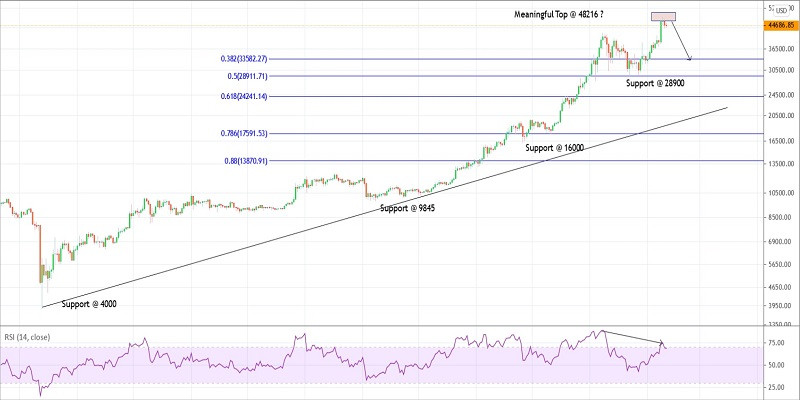 Bitcoin bears might be preparing to take control and push further lower towards $33,500 mark before the crypto finds some support again. After having print fresh highs through $48,200 levels early this week, Bitcoin has dropped through $45,000 levels. The crypto is seen to be trading around $45,050 levels at this point in writing and is expected to drag further towards $33,500 in the next few trading sessions.

Immediate resistance is now in place around $48,200/300 mark, while support comes in around $29,000/500 levels respectively. Looking at the long term wave structure, Bitcoin continues to keep its uptrend intact since $3,100 lows in December 2018. Bulls have managed to carve a series of higher highs and higher lows since then and a major top might be in place at $48,200 levels this week. A minimum retracement could drag prices lower towards $33500, which is fibonacci 0.382 retracement of the recent boundary between $8,900 and $48,200 levels respectively.

Furthermore, RSI on the daily chart continues to produce a bearish divergence since new high was print at $48200 mark. If not a major reversal, Bitcoin might be preparing for a shallow retracement towards $33,500 levels before bulls are back.

Remain flat for now and look to buy again around $33,500 levels.