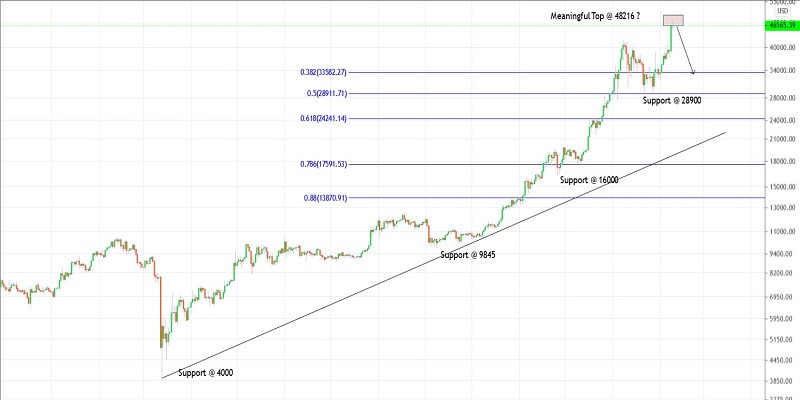 Bitcoin might have hit resistance $48,200/300 levels and could be preparing for a pullback towards $33,500 levels at least, in the coming sessions. Also note that the recent rally from $28,000 through $48,200 is accompanied by RSI divergence on the daily chart as discussed yesterday. This phenomenon also suggests for a potential bearish reversal ahead. The uptrend remains intact until prices stay on in the buy zone of support trend line shown here. Immediate resistance is seen at $48,300 while support is fixed at $28,000 levels respectively. Bitcoin is seen to be trading sideways around $46,400/600 levels since yesterday, and is expected to produce a pullback towards $33,500 at least, if not further. The recent boundary that is being worked upon is between $8,900 and $48,300 levels respectively. The fibonacci 0.382 retracement of above rally is seen to be passing through $33,500 levels as depicted on chart here. A minimum correction to those levels might produce a bullish reaction going forward.