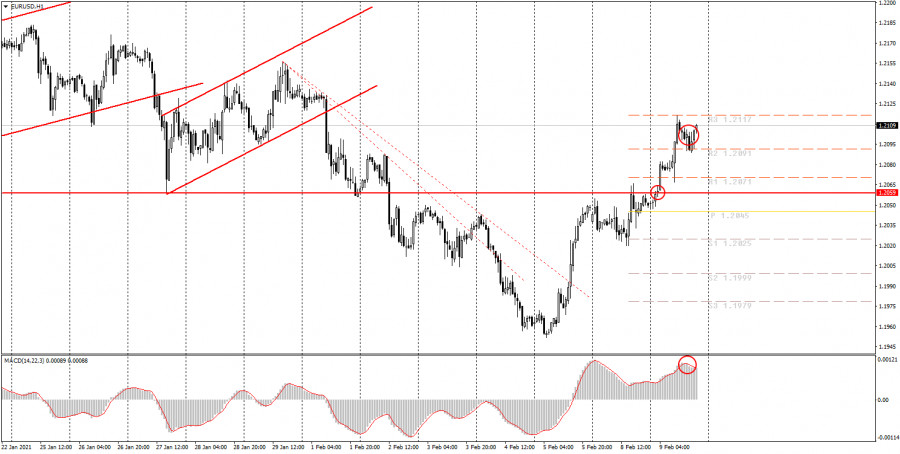 The EUR/USD pair continued its upward movement, having previously overcome the 1.2059 level, from which it had repeatedly rebounded earlier. Thus, the upward trend has continued, but there is no way now to form a trend line or channel. More precisely, there is a possibility, but this line or channel will be weak, since the price has never really corrected during the entire period of the upward movement (since last Friday). Thus, any more or less significant correction will result in the price settling below the trend line or channel, which will be a false signal to the end of the upward trend. As for trading over the past day, in the last article we advised you to open long positions either by the MACD signal, which should have been discharged to zero beforehand, or by surpassing the 1.2059 level. As a result, a second signal was formed. We advised you to keep long positions open until the MACD turns to the downside. Thus, novice traders could earn about 20 points based on our recommendations. Not much, but still. We advised you to refrain from opening short positions during the past day.

The macroeconomic background was not that weak, it was simply absent. Nothing interesting happened during the day, either in America or in the European Union. The fact that the euro continued to grow can only be explained by global fundamental reasons. We analyze them in detail in the articles on fundamental analysis. Beginners, however, should clearly know one thing: at the moment, the foundation is such that the dollar may fall by several hundred points. Not quickly, not immediately, but in the long term – this is absolutely possible.

Tomorrow there will be speeches by Christine Lagarde and Jerome Powell, the presidents of the European Central Bank and the Federal Reserve. There are few chances that they will tell the markets anything important, nevertheless, you should at least know the exact time of their speeches, since volatility surges and sharp price reversals are possible at this time. However, we believe that tomorrow will do without it. The same goes for the potentially very important US inflation report for January. The market reaction may follow, but only if there is a strong difference between the predicted value and the actual

1) Long positions are currently relevant, since the trend after breaking the trend lines is growth. So now novice traders are advised to wait for a new round of correction and discharge of the MACD indicator to the zero level, afterwards we wait for a new buy signal to form and buy the pair while aiming for resistance levels 1.2091 and 1.2117. You can also open long positions in case the price rebounds from the 1.2059 level from above and keep them open until the MACD indicator turns down.

2) Trading for a fall has ceased to be relevant at the moment. So now novice traders need to wait for a new downward trend and after that you can consider options for trading bearish. Such a scenario is not expected in the near future, since a trend line or channel is missing right now.