The cryptocurrency market skyrocketed after the news from Tesla, an electric car manufacturer. Elon Musk said that his company had invested $1.5 billion in bitcoin. As a result, the prices of all major cryptocurrencies soared. Bitcoin and ether have hit new all-time highs, and their rally continues. However, the second statement from Tesla CEO could have a much longer lasting effect. Musk said that Tesla would start accepting bitcoin as a payment method for the company’s products.

It seems that market participants have not taken this announcement seriously enough. Perhaps the point is that the investment flow in bitcoin has now become a matter of public interest, which brings immediate results. Notably, the fact that the digital asset has been adopted as a payment instrument is a very important event in the cryptocurrency market. Thanks to this announcement, bitcoin has every chance to significantly increase the number of users and, consequently, gain in value. Now every news or report related to Tesla will have a positive impact on the dynamics of bitcoin.

This sort of union can be called ironic, because 10 years ago nobody could imagine such a development in the markets of cryptocurrency and electric cars. Five years ago, they managed to occupy their own niches in the market. As of the beginning of 2021, these two phenomena are actively developing together. At the moment, bitcoin is trading at $48,000 on the Binance cryptocurrency exchange. Moreover, it is likely to continue moving in an uptrend over the next few days. However, this euphoric excitement around the cryptocurrency can suddenly face the harsh reality of the global market. 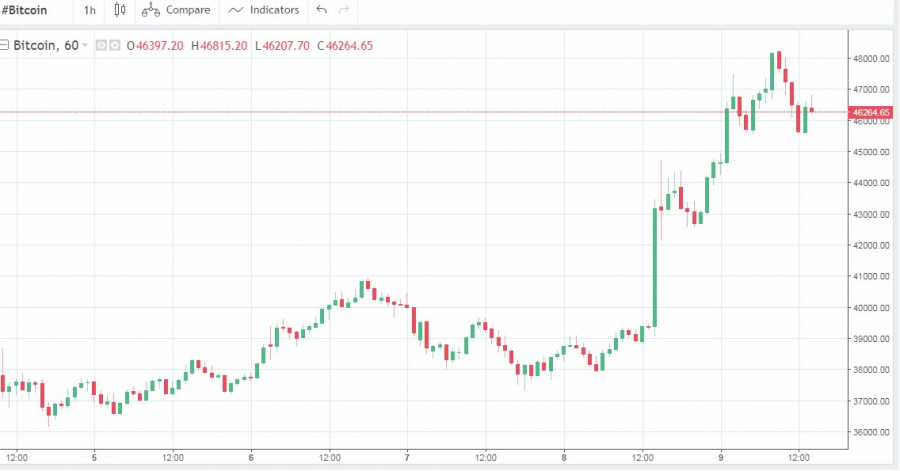 As of February 9, bitcoin continues to extend gains. However, investors are worried about the main feature of digital assets – their high volatility. It is not so difficult to set a new all-time high amid loud announcements and large investments. The hardest part is to stay firmly at this level and not to lose in price. Arguably, this bitcoin’s rally is impulsive in nature. Therefore, a significant correction is highly likely. Thus, traders should focus on more stable assets that did not show strong upside momentum compared to the giants of the crypto market.