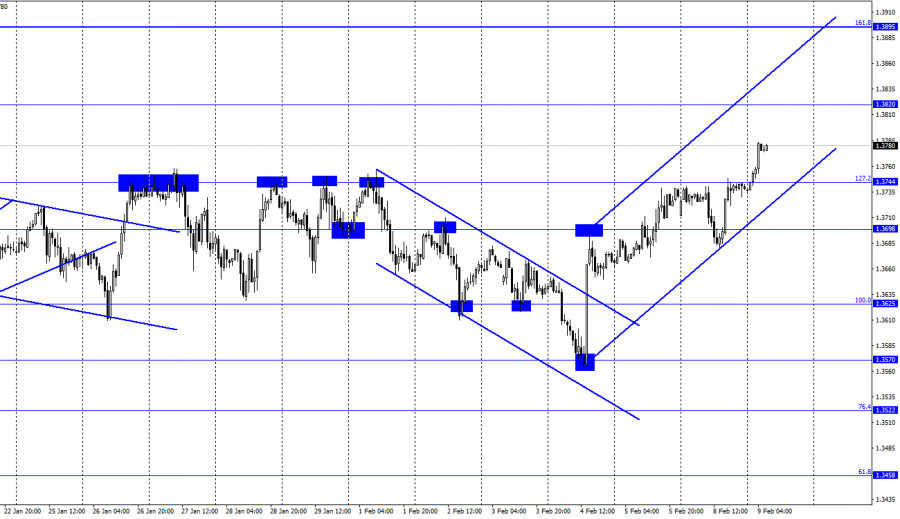 According to the hourly chart, the quotes of the GBP/USD pair performed a reversal in favor of the British dollar and resumed the growth process in the direction of the level of 1.3820. I also built an upward trend corridor yesterday, which characterizes the current mood of traders as “bullish”. The most important thing that happened over the past day is the closing of quotes above the Fibo level of 127.2% (1.3744), near which the pair has been moving in recent weeks and which significantly increased the chances of the British dollar for further growth. However, closing the pair’s exchange rate under the corridor will work in favor of the US currency, and some fall. Meanwhile, the British Association of Carriers has released data showing that the volume of exports from the UK to the EU countries has significantly decreased compared to the same period last year. The organization reports that the volume of exports in January 2021 fell by almost 70% compared to January 2020. The statement also says that it was not the coronavirus pandemic that caused such a strong drop, but a new mechanism for controlling goods at borders and various bureaucracies.

However, the official position of the government differs from that of the association of carriers. “Thanks to the hard work of carriers, violations at the border have so far been minimal, and freight traffic is now close to normal levels, despite the COVID-19 pandemic,” the British government said. However, it seems that the trade turnover has seriously decreased. Many drivers note the need to carry a health certificate when crossing the British border with the EU. All this only complicates and slows down the process of cargo transportation. Demand for the British currency has increased again, and now the currency can target the level of $ 1.4. It is still difficult to make an accurate conclusion about the reasons for the new growth of the British, but it seems that they should be looked for in America, not in the UK since there is simply no positive news from Britain. 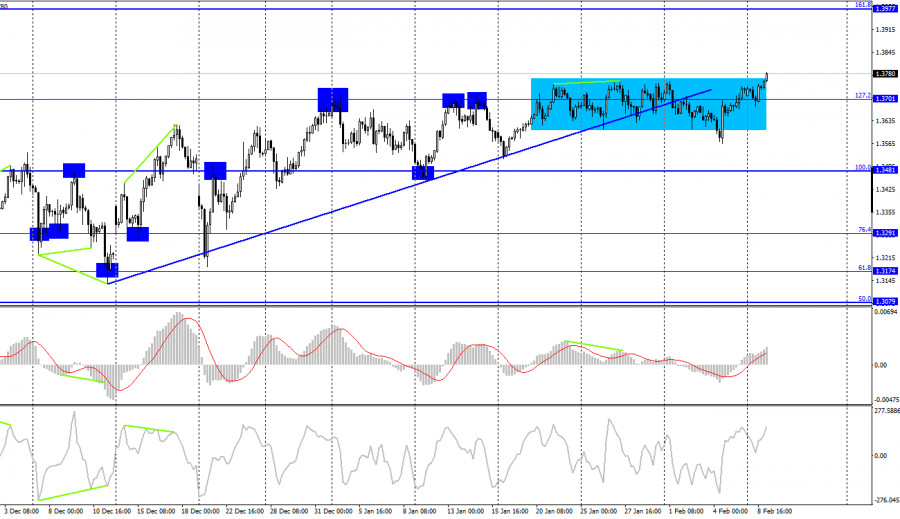 On the 4-hour chart, the GBP/USD pair performed a reversal in favor of the British dollar and closed over the rectangle that displays the sideways corridor of the last few weeks. Thus, the growth process can be continued in the direction of the correction level of 161.8% (1.3977). Today, the divergence is not observed in any of the indicators. I recommend paying more attention to the hourly chart, where there is a trend corridor. 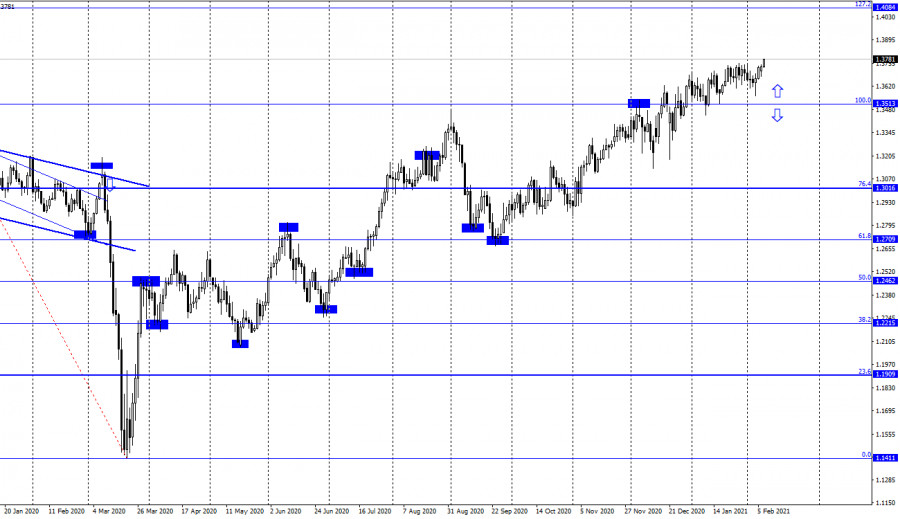 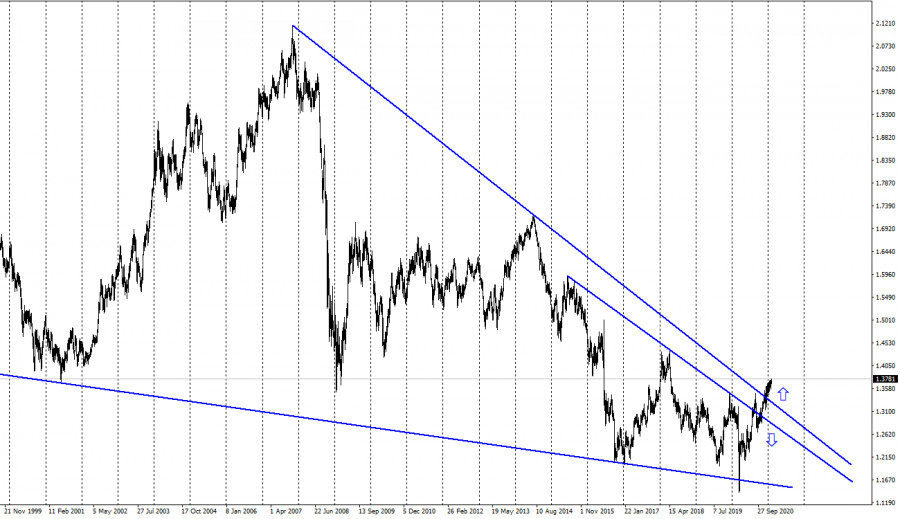 On the weekly chart, the pound//dollar pair completed a close over the second downward trend line. Thus, the chances of long-term growth of the pound are significantly increased.

On Monday, the Governor of the Bank of England, Andrew Bailey, made a speech in the UK, but again he did not report anything remarkable. In the US, the economic news calendar was empty.

News calendar for the United States and Great Britain:

On February 8, the calendars of economic events in Great Britain and America are again empty, thus, the influence of the information background will be absent. This, however, does not prevent traders from continuing to buy the British. 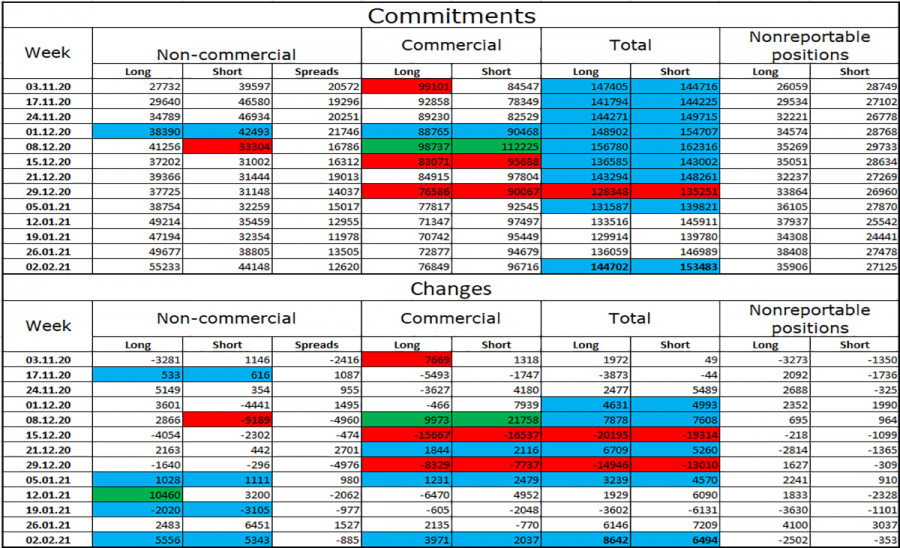 The latest COT report from February 2 for the British was much more “calm” than for the Europeans. During the reporting week, the “Non-commercial” category of traders opened 5.5 thousand long contracts and only 2 hundred fewer short contracts. Thus, the mood of the major players, according to the COT report, has not changed. Speculators continue to maintain a very restrained “bullish” mood, which can not be said by the behavior of the Briton itself, which continues to remain very high and does not show any signs of having a desire to start falling.