Several signals to enter the market were created yesterday. Let’s take a look at the 5-minute chart and break it down. You can clearly see how the bears are trying to break through 1.3723, afterwards the pound started to fall with renewed vigor. Unfortunately I didn’t wait for the 1.3723 level to be tested from the bottom up, which would allow us to enter short positions, so I missed the signal. Then the bulls tried to defend the 1.3688 level and it seemed to be successful, but this did not lead to a rapid large growth for the pair, which forced me to exit long positions. The bulls regained control over the 1.3723 level in the afternoon and after this level was tested from top to bottom, a signal to open long positions emerged as the pair continued to rise. As a result, the upward movement was around 35 points.

Before examining the technical picture of the pound, let’s take a look at what happened in the futures market. The demand for the pound continued to increase even though the pair remained in a wide horizontal channel. The Commitment of Traders (COT) reports for February 2 revealed an increase in both long and short positions. This time there were more buyers, which led to an increase in the positive delta. The bulls’ desperate attempts to surpass annual highs will lead to success sooner or later, so buyers do not lose hope that the bullish trend will continue in February. Each major decline in the pound prompts major players to raise long positions in anticipation of a more active GBP/USD recovery in the future. Long non-commercial positions rose from 47,360 to 53,658. At the same time, short non-commercial positions increased from 39,395 to 44,042, which prevented bears from taking control of the market. As a result of this, the non-commercial net position rose to the level of 9,616 against 7,965 a week earlier. The weekly closing price was 1.3675 against 1.3676.

The fact that the bulls held their positions at such a high volatility within the week, once again suggests that the pair is clearly set to overcome annual highs. I recommend betting on the pound’s succeeding growth. The demand for the pound will only increase as quarantine measures are lifted, which are expected to be phased out in February this year. The support for the population and the labor market, which will be announced in March, will also have a positive effect on the pound’s rate. All the talk about negative interest rates from the Bank of England was postponed indefinitely last week, which allows the pound to spread its wings. 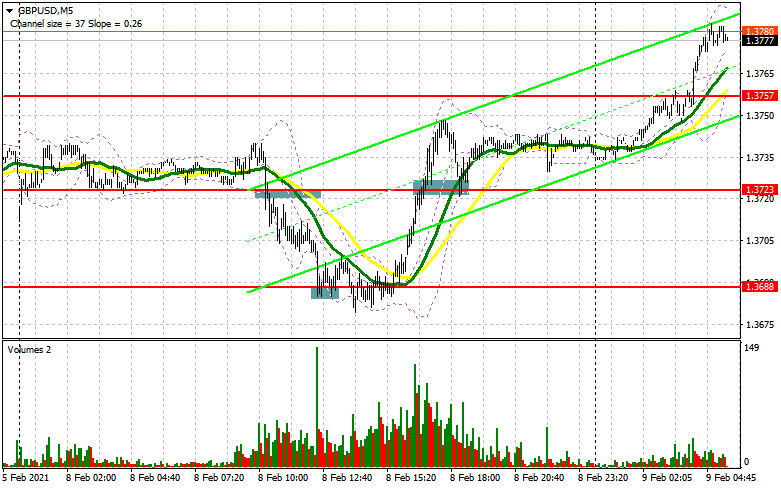 The initial task of the pound buyers is to settle above the resistance level of 1.3791. Testing this level from top to bottom creates an additional signal to open long positions in sustaining the upward trend, which may result in renewing highs in the area of 1.3825 and 1.3879, where I recommend taking profits. In the event of a downward correction in GBP/USD in the morning amid the absence of important fundamental data, it is best not to rush into long positions, but wait for a false breakout in the support area of 1.3757, which previously served as a fairly powerful resistance limiting the pair’s growth potential. If buyers are not active, I recommend waiting for the 1.3721 low to be tested, afterwards you can buy the pound from there on a rebound, counting on an upward correction of 20-30 points within the day. The moving averages, playing on the side of the buyers of the pound, are also located there.

Forming a false breakout in the 1.3791 area will return the pressure to the pair and lead to forming a small downward correction in the first half of the day. An equally important task for the bears is to regain control over support at 1.3757. However, there are no fundamental reasons for this. Therefore, only a breakout and the ability to test this level from the bottom up can create an entry point into short positions, as we aim to pull down GBP/USD to a low of 1.3721, where I recommend taking profits. There are also moving averages, playing on the side of buyers of the pound. In case the pair grows during the European session and bears are not active in the resistance area of 1.3791, I recommend not to rush to sell, but to wait for the 1.3825 high. I also recommend opening short positions immediately on a rebound in the resistance area of 1.3879 with the aim of a downward correction of 30-35 points within the day. 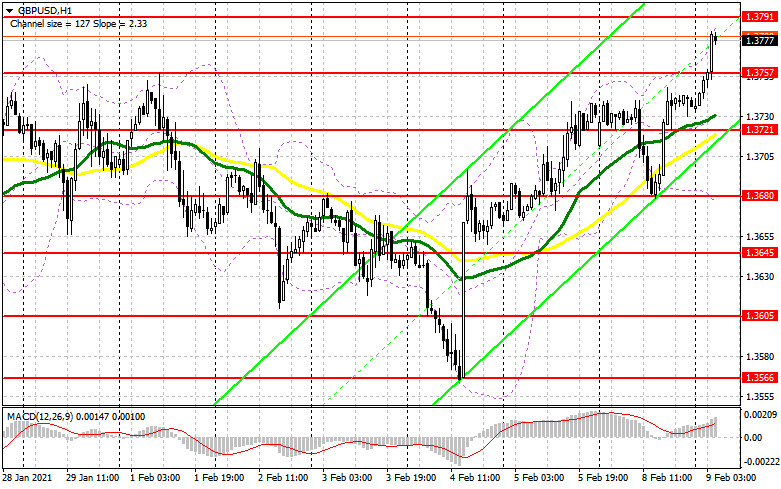 Trading is carried out above 30 and 50 moving averages, which indicates the pound’s succeeding growth in the short term.