Several signals to enter the market appeared yesterday. Let’s take a look at them. Let’s take a look at them. I marked the entry point for short positions that appeared in the morning on the 5 minute chart. I mentioned the 1.2047 level in my morning forecast and advised you to make decisions on entering the market. A false breakout was formed in this range during the European session. However, the euro did not sharply fall and the pair went down by around 25 points, afterwards the bulls tried to take control of the market. After a breakout and the pair settled above 1.2047, this level was tested from top to bottom in the afternoon, but there was no quick upward rebound and the pair fell below this level, which resulted in taking losses.

Before talking about the further prospects for the EUR/USD movement, let’s see what happened in the futures market and how the Commitment of Traders (COT) positions changed. Everyone had already forgotten about the problems with vaccination, and it would seem that it was solved. Disappointing fundamentals were not a reason to sell the euro for a long time now. Another thing is a decline in the EUR/USD pair and a more attractive rate for buying by medium-term investors.

The COT report for February 2 revealed a sharp rise in short positions and a reduction in long positions, which reflects the pair’s downward correction in late January and early February this year. Weak fundamentals for the eurozone economy and lower economic estimates from the European Central Bank limit the euro’s growth potential, so does the fact that vaccinations in the eurozone will proceed at a slower pace than expected. All of this will lead to a double recession in the European economy in early 2021, but it is unlikely to seriously affect the medium-term prospects for the EUR/USD recovery. Therefore, with each significant downward correction, the demand for the euro will only increase, and the lower the rate, the more attractive it will be for investors. The prospect of canceling quarantine will clearly keep the market positive in the future. The COT report indicated that long non-commercial positions fell from 238,099 to 216,887, while short non-commercial positions rose from 72,755 to 79,884. Due to the sharp decline in long positions, the total non-commercial net position fell to 137,003 against 165,344 a week earlier. The weekly closing price was 1.2067 against 1.2142. 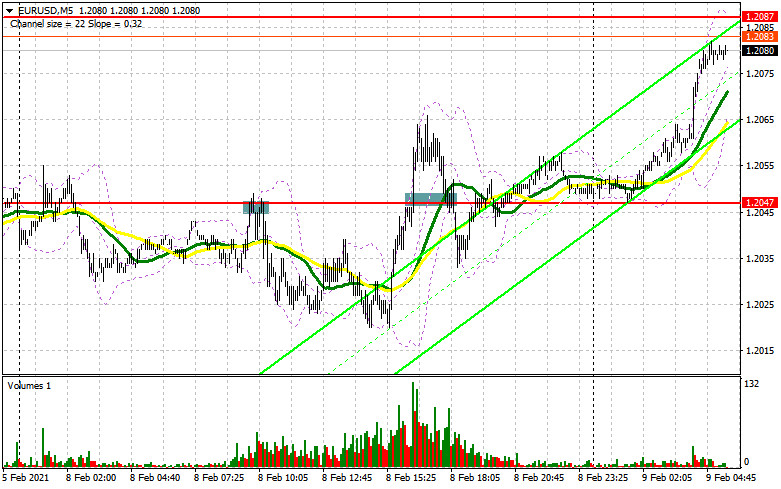 Buyers will be focused on the 1.2087 level since there won’t be any significant fundamental reports today. A breakout and consolidation above this area, along with being able to test it from top to bottom will create a good entry point to long positions, which will lead to a new wave of growth for the euro so it can reach a high of 1.2129, where I recommend taking profits. The succeeding target will be the high at 1.2175. The support measures offered by the new US president will certainly continue to weaken the position of the dollar against a number of world currencies. For this reason, betting on a succeeding decline in the EUR/USD pair will not be an entirely correct decision. In case the euro falls this morning, the emphasis will be placed on the 1.2047 level. Moving averages that play on the buyer’s side also pass in this range. Forming a false breakout in that area creates a good signal to enter long positions as we expect the euro to strengthen in the short term. If buyers are not active at this level, it is best to postpone long positions until a larger low of 1.2003 has been tested, from which you can buy the euro immediately on a rebound, counting on an upward correction of 20-25 points within the day.

I recommend opening short positions against the upward trend this morning in case a false breakout forms in the resistance area of 1.2047, which will generate a signal to sell the euro. Weak data on the euro area and the speech of European Central Bank President Christine Lagarde on the slower recovery of the European economy are likely to weigh on EUR/USD during morning trading. This will make it possible for the bears to return EUR/USD to the support area of 1.2003, since the pair’s succeeding direction depends on whether the price surpasses it. A breakout and being able to test this level from the bottom up will create a new entry point for short positions, which will pull down EUR/USD to the annual low of 1.1952, where I recommend taking profit. If we continue to observe an upward correction from the euro in the first half of the day, and the bears are not active in the resistance area of 1.2047, then it is best to postpone short positions until the 1.2087 high has been tested, from where you can sell EUR/USD immediately on a rebound in order to 20-25 points within a day. 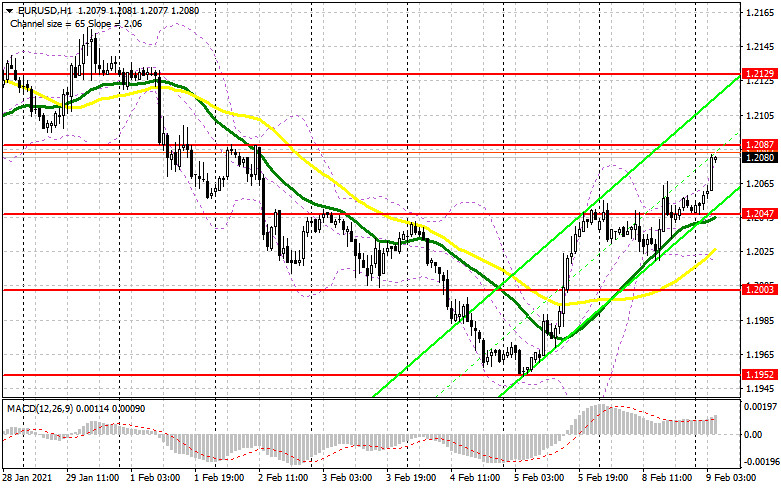 Trading is carried out above 30 and 50 moving averages, which indicates an attempt by the bulls to continue the upward correction of the pair.