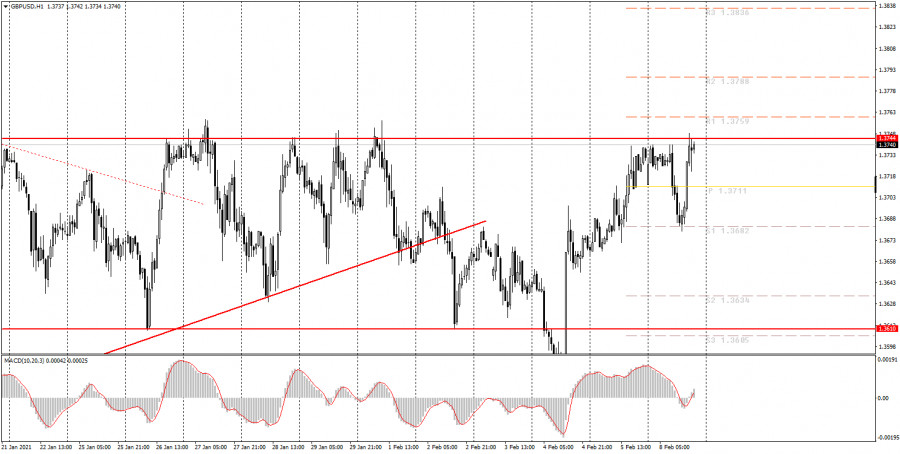 The GBP/USD pair started trading immediately near its 2.5-year highs on Monday, February 8. We continue to draw your attention to the absolutely illogical behavior of the pound/dollar pair. Usually, if the highs are updated for a long time, then the price only goes up for a short period of time, forms a new high and then goes down. That is, it forms a clear peak. As for the pound, the price has been quietly trading near 2.5-year highs for the third week and tries to update them from time to time but fails. The peak level of Monday morning was 1.3740, afterwards the pair fell to the support level of 1.3682, rebounded off it and returned to the 1.3744 level. In our previous article on the pound, we recommended trading bearish, if the price clearly rebounds from the 1.3744 level, and this did not happen in the morning, so you should not open short positions right now. The same applies to long positions, as at the time of this writing, the price has not yet surpassed the 1.3744 level. Therefore, everything will revolve around the 1.3744 level again on Tuesday. Overcoming – succeeding upward movement and the ability to trade up. The sixth rebound – and a new round of the downward movement.

Bank of England Governor Andrew Bailey’s speech was supposedly scheduled on Monday afternoon in the UK, so the pair traded most of the day without the influence of fundamental and macroeconomic factors. Despite the rather active visual trades, in reality, from the low to the high of the day, the price passed 69 points, which is quite a bit for the pound. Thus, fundamentally, there is absolutely nothing to add to our previous conclusions. Traders continue to ignore almost all macroeconomic statistics, and they are not at all interested in the problems of the UK economic and epidemiological plan.

No major reports or other events scheduled in the UK and the US on Tuesday, February 9. Thus, novice traders will have to trade using pure technique. If in the case of the European currency this is good, since the foundation and macroeconomics will not interfere with technical signals, then in the pound’s case the absence of news and reports does not make the process of analysis and forecasting any easier. At this time, the only thing that we can advise you is to build on the 1.3744 level.

1) Long positions are no longer relevant, since the price has broken the upward trend line and cannot overcome the 1.3744 level. However, if the price settles above this level, then beginners are advised to open long positions with targets at 1.3759 and 1.3788 and keep them open until the MACD indicator turns down.

2) Short positions are as irrelevant as long positions. However, if the price makes the sixth unsuccessful attempt to overcome the 1.3744 level, and in case the price clearly rebounds from this level, you are advised to open short positions while aiming for support levels of 1.3700 and 1.3682. You should trade exclusively from the 1.3744 level.