Bitcoin (BTC/USD) has increased as much as 48,200 in the morning registering a new all-time high. Yesterday I’ve said in my analysis ” Bitcoin Eyes New Historical Highs! ” that Bitcoin is expected to increase further after passing above the short-term previous highs.

Technically and fundamentally, BTC/USD was strongly bullish, so the current rally is natural. The price has slipped lower in the last hours which is normal after such an aggressive rally. Still, the drop could be only a temporary one before it moves higher again. Such a retreat could help the buyers to buy this crypto again. 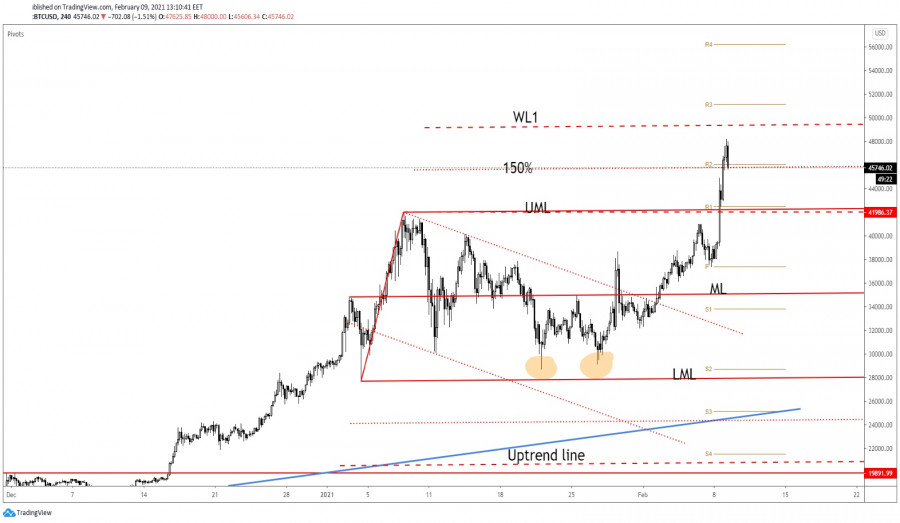 BTC/USD was expected to jump above 41,986 former historical high after retesting the Pivot Point (37,383). The aggressive breakout through the pitchfork’s upper median line (UML) and through the R1 signaled that the price will continue to increase.

Now the rate has decreased to retest the broken R2 (46,048) level and the 150% Fibonacci line. After this temporary decline, BTC/USD could approach and reach the first warning line (WL1) and the $50,000 psychological level.

The new historical high signals that BTC/USD could resume its major uptrend in the upcoming period. Stabilizing above the 150% Fibonacci line and beyond the R2 (46,048) represents a bullish signal. The price could jump way higher after the current retreat.

Closing below the R2 could indicate a larger short-term retreat. Bitcoin could come back to retest the 41,986 former all-time high before resuming its upwards movement. One thing is certain now, Bitcoin’s growth is far from being over after the latest developments.