USD/CAD is on a declining path again as the USDX plunged after the US NFP. Unfortunately, the pair has invalidated a potential larger growth, so a deeper drop is favored in the short term.

The pair could slip lower trying to test and retest the near-term support levels before developing another leg higher. The greenback could take the lead again if the US inflation data comes in better than expected tomorrow.

USD/CAD Turned To The Downside! 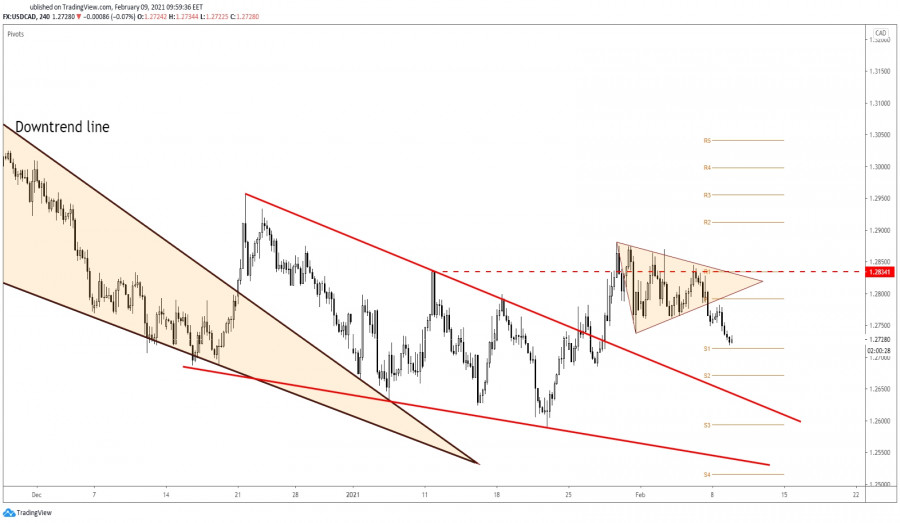 Last week I’ve said that a downside breakout from the symmetrical triangle activates a sell-off. Its failure to retest the triangle’s support or the Pivot Point (1.2792) indicates strong sellers.

The S1 (1.2714) is seen as an immediate downside target. Dropping and closing below it signals a further drop towards the S2 (1.2671). The poor NFP report has pushed the pair lower.

Only an upside breakout from the triangle pattern would have confirmed a larger upside movement ahead. Now, we have to wait for a reversal pattern before going long again.

USD/CAD could extend its sell-off if closes under the S1 (1.2714). Yesterday’s major bearish candle that erased the minor gains represented a selling signal.

A buying opportunity could be signaled by a false breakdown with great separation through the S1, S2 level or by a major bullish engulfing printed around these levels. USD/CAD could increase again if the US Dollar Index will start to increase after the current sell-off.